EPCOT: The Evolution of Test Track

Test Track has not always been Test Track. When the park first opened in 1982 the ride was called the World of Motion. It was a slow moving ride, sponsored by the General Motors company, that showcased milestones in transportation. Think of it kind of like Spaceship Earth but for transportation. The ride itself was just under fifteen minutes long.

The ride ended with a prediction for the further of transpiration. Much like the current ride today when guests exited the ride they were given a look at the newest models in the GM collection.

However, in the mid 1990s the Disney company decided to take the ride in a different direction. The biggest complaint against the Disney parks was that there were no major thrill rides. Yes, the Magic Kingdom had its famous mountain range, but what did EPCOT have? Nothing. So, in 1996 the World of Motion closed its doors to make way for what would become one of the most popular attractions at Walt Disney World.

The World of Motion, and then subsequently Test Track, is located in the Future World section of EPCOT. Today the ride is next to the Mission: Space ride. 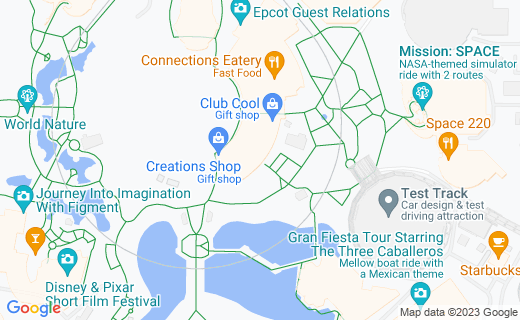 It took about three years for Test Track to open to the public. The original open date, in 1997, couldn't be met because the ride designers discovered performance problems during testing. The soft opening of the ride occurred in December of 1998, the ride was an instant hit. The official opening took place on March 17, 1999.

Test Track caused many headaches for Disney Imagineers. When the ride started to go through testing they found that the tires used on the cars could withstand the demands of the track. When they finally were able to resolve this problem another one popped up. This problem was slightly more problematic as it would lead to long wait times and disgruntled guests. The original ride, the World of Motion, only had six cars in operation at once. The commuter system for Test Track could also only support six cars at once. This was not acceptable. It took nearly two years for them to develop a program that could support the number of cars that the ride demanded. Just how many cars is that anyway? 29.

In December of 2012 the ride reopened with a facelift. After having been closed for just eleven months the ride reopened with a new sponsor. The GM company still sponsors the attraction but now only their Chevrolet department sponsors the ride. As a result all of the ride cars got a make-over and now resemble the cars of Chevrolet. The new ride is now a lot darker than the original, so caution should be used with children that are afraid of the dark.

What is really cool about this new version is that guests can make their own car and then test it out on the track. Now, the actual cars that you ride in do not change, but a computer runs the data based on what you designed. This allows you to see how efficient, powerful, and capable your car is. If you have a couple people in your group that want to design cars but don't want to wait in line each time have no fear. Simply tell the cast member that you have multiple groups. For example, on my last trip there were five of us. Two people in our group wanted to make cars. So we had a group of two and a group of three. When you get up to where you board the ride you will see that there is a place to hold your magic band. This is how the car you designed can be tracked on the course. You will also notice that there are 6 stations, one for each person in the car. This means that all 6 people can design a car!

Along the ride there are screens that show you where your car ranks in comparison to those designed by the others in the car. At the end of the ride you can check to see how your car compares with everyone else's. How cool is that?! There are also a lot more interactive activities in the area just out side of the ride exit. This would be a great place to spend some extra time in the air conditioning to escape the summer heat or to take shelter from the rain.

Have you ever been on Test Track?

After waiting in line guests are moved into the queue. In this room a video is played where they have the ride explained to them. Essentially it is just how cars are tested at testing facilities. After the 2012 renovation riders have the chance to customize their car.

After selections have been made for the ride cars guests are loaded into their designated cars. One of the big differences is that OnStar now makes an appearance on the ride. The ride itself is very similar to the original Test Track, it now just has a different backdrop. The grand finale is high speed acceleration through the outdoor course.

Once the ride is complete guests exit the vehicles and head to the Chevrolet showroom. Here guests have the option to play games with the cars they designed and see the newest Chevrolet products. This section is great for entertaining young children, particularly little boys, during rainstorms.

This is one of my favorite rides. I love everything about it. Its good fun, and a must do whenever I hit up EPCOT. That being said this ride can be a little intense for younger riders. I know that my first trip to Disney I wanted nothing to do with it, in fact I refused to board the ride with my family. (Something my father still won't let me live down to this day...) I can't tell you how many times I have been in line with small children, hardly tall enough to ride, that have been nervous. I just tell them that this ride will not go any faster than their parents driving on the interstate. Its the truth. The ride just feels faster because the cars are convertibles and accelerate so quickly. In fact this last trip there was a little girl on school field trip that ended up in our car They had all gotten in line as single riders in order to get on faster. She was very nervous about how fast the car would go but felt much better after we talked to her and were buckled in.

If you want to ride Test Track but don't want to do it first thing I would strongly recommend getting a fastpass as soon as possible. It is not uncommon for fastpasses for this ride to run out in a few hours during peak season.