Susette has a lifelong interest and practice with good physical and mental health, including the environment that sustains us all.

East Africa is not a particularly comfortable place to visit, but it is an exciting one. Amenities, like safe drinking water, are poor in non-tourist areas, but wildlife abounds. The cities are generally crowded, but if you know what to look for there are bright spots everywhere. The famed Maasai live in East Africa with their heavy neck jewelry and herds of cattle and ways of living that seem "wild" to the "cultivated" West.

Most of East Africa is dry and dusty, but there are swamps, lakes, and fertile mountains in some areas. Fresh food is sporadically available, although tourist companies provide well for their customers. Available water can be toxic. It's not really a comfortable place to visit, but it is exhilarating.

In East Africa water is available or not, depending on the region. Over the years, East Africans have cut down the majority of forests for firewood, which inhibits the fall of rain and starts the process of desertification. Hence, most of East Africa is desert or grassland. Temperatures generally range from 53-77º F (15-25º C) year round. 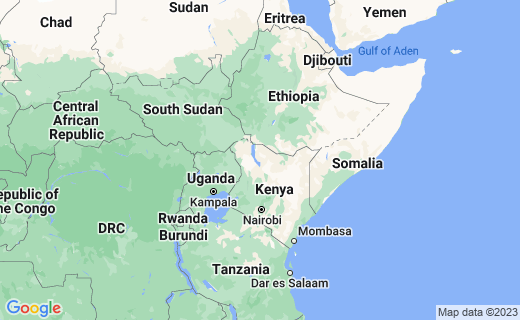 Tourists go to East Africa primarily for the wildlife, but also for the archeological digs at Olduvai Gorge, mountain climbing, and cultural curiosity. East Africa is where you find massive herds of antelope, zebra, wildebeest, and other herbivores. They, in turn, draw carnivores - beast, bird, and man - including poachers, which can be dangerous. The animals themselves, although exciting and great to photograph, can also be dangerous . . . but a more insidious danger is the water.

Rain: Wet seasons in East Africa are generally two - the months of April and October through November - except for the Ethiopian Highlands, where rain falls throughout the summer months. (This is the source of the Blue Nile.) In the mountains it can rain up to 98" per year, as compared with 15" in California, whereas the extremely dry regions of northern Kenya and Greater Somalia go many years without rain.

Rivers: East Africa hosts three of the longest rivers in the world - the Nile, the Congo, and the Jubba. These rivers run north to the Mediterranean, west to the Atlantic, and southeast to the Indian Ocean, respectively.

Lakes: While much of East Africa is very dry, there are a few areas with an abundance of lakes, some large and some small. Here are the three largest:

Groundwater: So far East Africa has used its groundwater supplies only minimally, as UNESCO discovered in early 2012. Preparatory to providing more water for East Africans, the agency used high-imagery satellites to locate good sites for drilling. The images showed billions of gallons of water underground that Ethiopia, Tanzania, and Kenya could tap into.

Before countries develop water transportation infrastructure, most of their populations congregate around lakes, rivers, and streams. This has led to pollution of those water bodies by human, animal, and industrial wastes. The biggest challenge that developing governments face is the building and maintenance of good water systems.

Ironically, armed conflicts in countries in the region are serious deterrents to building infrastructure, yet the lack of water availability is often a major cause of these conflicts. Here are three potential solutions to the problem:

Water scarcity/drought: East Africa is currently going through its worst drought in 60 years. In many areas children have to trek over 12 miles for water, according to Plan International. The spring of 2010 brought torrential rains, which flooded tourist lodges in southern Kenya. Both dry years and flash floods can be traced to massive deforestation in mountains and foothills.

Water contamination: Because of the open pollution of many of these water sources, waterborne illnesses abound. Some are caused by effluent from upstream mining operations, but most are waterborne diseases from human and animal wastes.

The following water parasites are commonly found in the area: Cryptosporidium, giardia, bilharzia (schistosomiasis), e.coli, typhoid fever, cholera. Symptoms of waterborne illnesses include diarrhea, vomiting, nausea, fever, aches and/or chills. Bilharzia is a pathogen carried by snails in water bodies, which insert themselves under the skin. Hence, it is wise not to swim or wade in local water bodies, unless the skin is completely covered.

Unlabeled bottled water: International standards require bottlers to include analysis data on their labels, but some local bottlers do not. Nor do they include manufacture or expiration dates. There are no national guidelines and consumers in those countries have not demanded them, due to the ignorance of potential dangers. Hence, there are some bottlers that pull water from tap water or directly from the rivers, and others that source well, but reuse bottles that have been emptied.

Luckily for Westerners, there are enough of us who have travelled extensively and written about it, that good ideas for preservation of health abound. Here are several tips:

Stay confident in your body's ability to be healthy. Our bodies are incredibly resilient. I lived in Bostwana with the Peace Corps for two years in the early '70s and, without being particularly careful, never had a problem. A friend of mine was confident and careless, though, swimming in the local river without protection, and he got bilharzia.

Here are several supplies and pieces of equipment you can take with you to make sure your water supply is safe. Note that airlines will allow bottled water, as long as it is purchased inside the security checkpoint.

If you have traveled before this and have tips not covered here, please share them in the Comments section below. Otherwise, just let us know what you think. Prepare well and enjoy your trip.

GSI Outdoors 36 Cup Coffee Boiler Design to be Sturdy for The Campsite, RV or Farmhouse Kitchen, Blue
A traveller can purify drinking water by boiling it over a fire. Let the water cool and you can use it to brush teeth and wash your face, as well. This is what we used to do on our photographic safaris.
Buy Now