Enjoy The Eastern Sierra Nevada in Pictures and Video

Mammoth Mountain is a premier ski area and one of the largest in the world. The drive along 395 is more than worth it for some of the best views of major mountains anywhere. Mammoth Mountain is ski central for Southern California winter sports lovers.

Starting from north of Mammoth Mountain, the northernmost rugged high Sierra is viewed from Bridgeport, Ca. The range is the Sawtooth Ridge and the Matterhorn, over 12k feet high. At the base of this beautiful section of the Sierra's are the Twin Lakes, pictured below. Trout fishing is not better anywhere, and each lake boasts 25 pound brown trout as record catches. There are more rounded high mountains to the north of this range but are not considered the High Sierra for climbing purposes.

Midpoint down US 395 are the Minarets, a jewel of the Sierra. The Minarets/Mammoth Mountain area is the most beautiful of the eastern Sierra in my opinion. This is a must see section of the Sierra Nevada. Mammoth Mountain is a massive volcano just east of the spine of the high Sierra Nevada which features the Minarets and Ritter Range to the west. Peaks range from 11k to 13k here. But they are particularly beautiful.

Mammoth volcano is one of the largest ski areas in the world at over 11k feet above sea level and is the place to go for SoCal people. Mammoth can handle 100 thousand skiers at one time. Mammoth Lakes is the upscale village located at the 7000 foot level on Mammoth Mountain (there is even a Westin Hotel) and was named after the beautiful lakes that form a boundary between the Sierras and Mammoth Mountain.

To the south of Mammoth Mountain is the monolithic ridge of highest Sierras, with Mt Whitney standing tall as the highest mountain in the lower 48 states. This is a stark but beautiful area. There is less snow this far south, but the rugged nature of the Sierra ridge is impressive, with many peaks measuring over 14 thousand feet tall.

In between these three areas are many jeweled treasures, such as the area around June Lake, the beautiful Sierras viewed from Bishop, Ca, and must see Mono Lake, an ancient lake with unusual spires, south of Bridgeport. 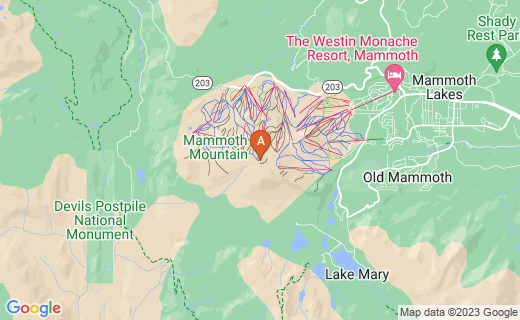 Eastern and High Sierra Golf Including Reno and Lake Tahoe

I have tracked low temperatures along the Eastern Sierra and clearly Reno and Bridgeport have much higher lows for the last 10 years than the normal lows. I thought that this may have been caused by population in Reno expanding, but the same decline is happening in sparsely populated Bridgeport as well. A fellow told me that the glaciers on Sawtooth are melting.

This does not seem to mesh with all those ideas out there about global cooling. I have seen historic snowfall records and those also seem to be higher than now. We never seem to get quite as much snow, even on a good year, as compared to normal.

This information is something to think about in the debate about global warming. Of course the other debate is whether we can do anything to stop this warming. That discussion is past my pay grade.