Enoshima: One of Japan's Most Beautiful Beaches in Kanagawa Prefecture

Where is Enoshima Beach and Island?

Enoshima is actually a place that brings back some great memories for me. Enoshima is actually a small island and a town by the sea. I went to Enoshima in August of 2005 which you could say was the height of the summer season in Japan. Enoshima was actually about 45 minutes to an hour by train where my brother was living at the time. Enoshima is actually located in the city of Kanagawa which is in the Kanagawa Prefecture. My brother was living about 45 minutes outside of the center of Tokyo at the time and that was the first area that he lived in while in Japan. I went to Enoshima beach about three times during my vacation in Japan which lasted 16 days. Those were some of the best 16 days of vacation I’ve had in my life that’s for sure! This writer had gone to the Enoshima Beach once before venturing on his own the second time. Trying to navigate around Japan without adequate Japanese language ability is a challenging task. But patience will be one of your biggest assets here. The hospitality of the locals will also make you feel at ease.

Why is Enoshima Beach special and what can you eat there?

Enoshima Beach is one of those beaches that will leave a great memory in your mind forever. It is one of those sights in Japan that any person that loves Japan would want to come back to. It almost seems like Enoshima has a sort of magical quality to it and it convinces you to keep on visiting. It is said that Enoshima Beach has a laid back vibe to it similar to Southern California. For this California resident and writer, being able to actually get to a beach within a reasonable amount of time would not be possible in the heavy Los Angeles traffic. However, Japan’s excellent public transportation system makes it so much easier to get around.

When you get off that air conditioned subway train only to start walking on the beach, you see the waves constantly moving and there is always a huge crowd of people some of them spending time in that beautiful water. Some are sitting on benches having a conversation with each other. A little further up from that beach area there was a small ice cream shop with some of the most delicious ice cream that you will ever taste in your life.

Enoshima Beach also has these huts where you can sit down and enjoy a quick meal at a decent price. The huts also have showers, lockers and equipment that you can rent on the beach. The hut can offer some relief from the heat and humidity.

A map showing where Enoshima is located 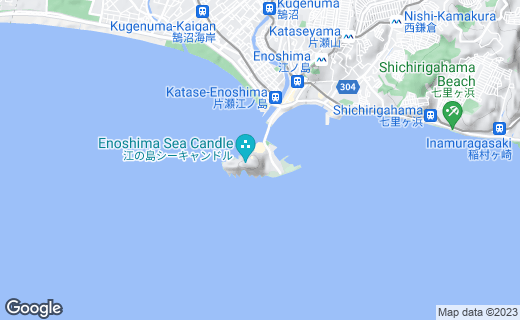 Try to Learn Some Japanese Before You Visit Enoshima Beach & Island

If you lack Japanese language ability, being able to have a conversation with the locals is going to be very challenging because many Japanese do not speak English very well even though they are taught English in school. You can get around somewhat with basic conversational Japanese as I was able to do. If you don’t know Japanese don’t panic because the locals are some of the nicest and most polite people that you will ever see. Also, try to learn some basic Japanese before you visit because that will make your trip to Japan much more enjoyable. You might even learn some Japanese on your trip.

Some interesting things about Japan and the beach areas during summer

One of the interesting things about Japan is that summer at the beach areas actually does not start until July 1st and it ends at the end of August. This is the time of year where the town and beach areas get the most visitors. Water sports are very popular such as surfing, sailing and jet boating. The beach and island actually get mostly the younger Japanese people to visit the beach area and the town itself. In Japan during the summer months, the heat and the humidity can really wear you out quick if you are not careful. Japan is famous for its vending machines serving a variety of cold drinks during the summer including cold drinks that you cannot find here in the United States. Make sure to wear light colored clothing and drink plenty of fluids because you can get dehydrated pretty quickly when the weather is hot and humid. Although Japan is hot and humid in the summer in Tokyo and the surrounding areas, the excellent train system in Japan gives visitors and residents access to a huge number of beaches where you can cool off. In Japan, summer nights cool down a little although not like Southern California. You will still have to run the air conditioner at night if you are in your apartment as the insulation in Japanese living spaces is pretty bad.

How Was Enoshima Created?

What else is so special about Enoshima Island and the beach? The creation of it happens to be one of the most interesting things about the island. It is believed that Benten, the goddess of good fortune, wealth, music and knowledge is responsible for the creation of Enoshima. She then went on to defeat a five headed dragon that had been bringing terror to the area (Japan Guide-Enoshima). Even years later, the trip to Japan is still remembered by me and if the future is any indication, those that love to travel particularly me will visit Japan again.

Besides, Japan is such an amazing country that will take your breath away so it won’t matter very much what the weather is like. I enjoy some humidity in the summer but many people hate humidity. Everyone has different preferences in terms of weather. Japan is one of the most amazing countries in the world and Enoshima Beach is one of the places that you should visit if you go to Japan. You will not regret your decision. First time visitors from Western countries especially the United States will be amazed at how different Japan is. It may be different but if you have an open mind and are flexible enough, a vacation to Japan will be a vacation that you are likely to remember for a long time if not forever.

A look at Enoshima Island in photos