Arizona and Utah are not the only states in the western United States that boast some extraordinary geologic formations.

If you travel to the northwestern part of the country, you may wish to do some exploring in Central Oregon, approximately a 3 hour drive from Portland, and 6 hours from Seattle. Or, you can fly directly into the Redmond International Airport, which is about 20 minutes north of Bend, Oregon.

Just over an hour's drive from Bend, but a world away from ordinary Central Oregon attractions, you can explore the ancient ruins of a volcano at Fort Rock State Park. Traveling south, and then east, the topography and scenery quickly change from forested stands lining the highway to a flat, barren landscape. Then, in the distance, a rocky formation stands in solitary. Like a collapsed cake sitting on a kitchen counter, the walls of the tuff ring form a fort-like shape, which is the basis for its name: Fort Rock.

The creation of a "tuff ring," is described by geologists as occurring when a volcanic vent is located in a lake or other area of abundant ground water. When magma rises to the surface of the vent, it meets the muddy lake bottom. Like other types of volcanic activity, molten basalt will explode from the ground, when steam pressure becomes too great from within the earth. Hot lava and ash erupting from the earth eventually settle around the vent, in a ring formation, and cool in the lake waters. Fort Rock is one of approximately 40 tuff rings in the Brothers Fault Zone of the Fort Rock Basin. It is estimated to have been created 50,000 - 100,000 years ago. In prehistoric times, it was an island, surrounded by the waters of Fort Rock Lake. Native Americans once would have to canoe to and from the island. This image is hard to imagine in the dryness that is now characteristic of the region!

There is no fee to park at Fort Rock State Natural Area, maintained by the Oregon State Parks. Restrooms and picnic tables are adjacent to the parking lot. Before you begin exploring the trails around and through the basin, you may wish to bring along some water. The area is deceptively large.

The basin itself is approximately 4,600 feet around. Be sure to bring a camera!

On a spring day, you may be lucky enough to spot jack rabbits, butterflies, and raptors. Keep an eye out for snakes sunning themselves on the warm rocks, too. The terrain is not complicated or steep, if you decide to stay within the basin. Children ages 4 and older should be able to manage without difficulty. There are spurs up to rocky cliffs, up to 200 feet high, that allow some magnificent views for those a bit more daring.

Whether you use the trip as a simple family outing, or as an opportunity for some historical and geological exploration, you will not be disappointed. One question that may arise is: where did the rest of the volcanic ring go?

Scientists have discovered that winds were particularly strong from the south, and waves on Fort Rock Lake relentlessly beat against that side of the rock formation. Erosion from the prehistoric Fort Rock Lake broke down the southern rim of Fort Rock, and washed it away.

If you make arrangements far enough ahead of time, you may also explore Fort Rock Cave. The area is a National Heritage site, and can only be accessed as part of a guided tour group during limited times of the year (two weekends per month, April through October).

Archaeologists discovered several 9,000 year old sagebrush sandals in the cave, as well as other artifacts of the prehistoric tribes that lived in the area when it was largely covered by Fort Rock Lake. This experience is recommended for school age children or older only, as it requires a one-half mile walk along rocky terrain.

In order to arrange for a tour, contact the High Desert Management Unit Office at (541) 388-6055 at least three days in advance. 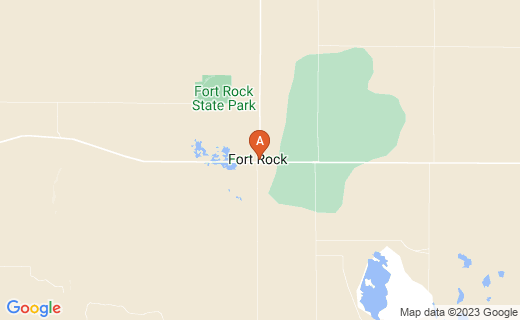 More to See in the Area Surrounding Fort Rock, Oregon

Before you head back, be sure to leave time to visit the Fort Rock Valley Historical Homestead Museum. A number of historical buildings were collected from homesteads in the area and saved from demolition, starting in approximately 1988. Together, they have been arranged into the Homestead Village. Children will enjoy a step back in history, as they explore St. Rose's Church, the Mekenmair Cabin, Webster Cabin, Dr. Thom's Office, the Bodenhiemer House, the Belletable House, Sunset School, the Fort Stratton House. An old wind mill and a land office complete the village. Each of the buildings is furnished with original artifacts, décor, and furniture. Just imagine what it was like to live back in the 1800s or early 1900s!

The museum is open from 10-4 on Friday, Saturday and Sunday. Although the website states it is only open from Memorial Day through Labor Day, we were able to tour the buildings in March; the museum was open then. Admission is free under 12, and is $1.00 for everyone else.

There are many fantastic areas in the region to explore, and it is hard to believe that most of them are within a relatively short driving distance from the urban centers of Central Oregon. Whether you enjoy photography, geology, or just have a love of the outdoors, the Fort Rock area is a great place to go for a change of scenery and a step back in time.