Lying atop a high bluff east of Cleveland’s downtown, Cleveland Heights was one of the last major ‘suburban’ cities ringing Cleveland to develop. Existing as a rather sparsely populated region of farmers and quarriers in the early 1800s, Cleveland Heights became a Hamlet by 1901 and a Village by 1903. A quadrupling of the local population by 1921 brought about the incorporation of the City of Cleveland Heights.

With the development of improved roadways and streetcar lines to Cleveland Heights, the construction of mansions, Revival homes, bungalows, apartment houses, and commercial districts began in earnest. A prime nexus of commercial development was the Y-shaped intersection of Cedar Road and Fairmount Boulevard, just above their descent downhill to the eastern fringe of the City of Cleveland and the University Circle area.

An early example of a planned neighborhood shopping district, Cedar Fairmount is today a special improvement district and a thriving hub of the local residential community. The multi-story Heights Center Building, a Tudor-styled structure of offices and apartments over retail establishments — intended to evoke a miniature English village, was completed in 1918. The Alcazar, a Moorish-inspired residential hotel with restaurant and club facilities, followed in 1923.

A traditional mix of land uses and building types

The Cedar Fairmount District is currently home to more than 100 businesses, including professionals, services, and restaurants, among a dense surrounding population of homes and apartments. The University Circle area of Cleveland lies just a mile or so below Cedar Fairmount, as do Case Western Reserve University and University Hospitals of Cleveland. The Cleveland Clinic occupies a sprawling campus just a bit farther west. With so much employment nearby, the District's residential properties see high demand and consistent turnover.

One of Cedar Fairmount’s best-known and most highly visible prizes is the Barton R. Deming House, built to follow the rising curvature of Fairmount Boulevard at the southeastern edge of the commercial district. Mr. Deming was an early Cleveland Heights developer, transforming acreage of farms and orchards into the Euclid Golf Allotment, a Garden-City-inspired arrangement of curving streets studded by gracious homes in green settings. 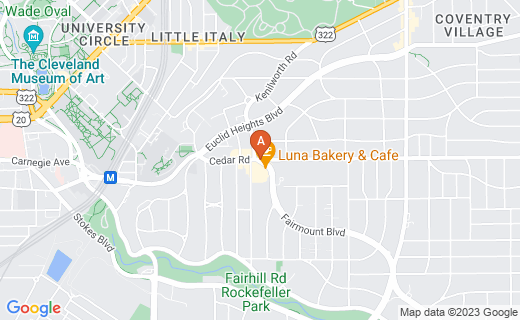 Enjoy the ambience of a quaint English village transplanted to the Midwest.

Designed by Howell & Thomas Architects, and completed in 1914, the original Deming residence is a four-story structure of French Tudor eclecticism, barely one room wide, but many rooms long, and finished in brick, stone and wood of creamy earth tones. After serving as a prominent private residence for a half-century, the structure was converted to a block of apartments by the 1970s. Yet it remains a signature architectural expression of the Cedar Fairmount District’s gloried historic past as an urban village for the upwardly mobile.