Breathtaking Adventures Along the California Coast

Kenna loves to travel and share cool places to visit so others can have a wonderful, if not better, time than she did.

Taking the family on a three-day road trip was the best decision I ever made. My husband, daughter, and I needed the break from our overdemanding lives between work and school. Come along with us and discover places to visit in northern California.

Hiking with the Family

We began our trip by driving toward the coast near Point Reyes. We took a daylong hike on the popular Alamere Falls trail. I heard from friends that the path follows the coastal range with views of the blue, majestic waters of the Pacific Ocean ending at Wildcat beach and a view of the Alamere Falls.

Alamere Falls is a unique waterfall in Point Reyes National Seashore because it is a tidefall, a waterfall that flows directly into the ocean. It is one of only two in the area, the other being McWay Falls in Big Sur. 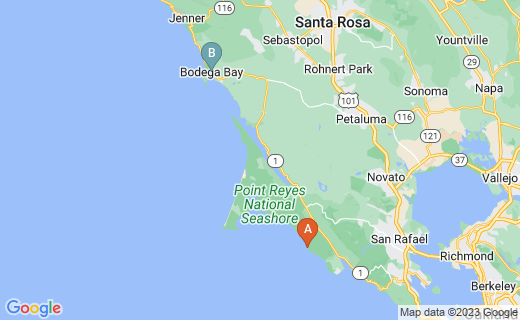 Wildflowers Along the California Coast

The spring season made Alamere Falls trail one of the best places to hike in the US. The trail is abundant with wildflowers of violet purples, reviving whites, bright oranges, and yellows surrounded by lush greens. I thought Monday was a good day for a hike. Hiking trails tend to be less crowded. Boy, I was wrong. I was surprised by how crowded the 13-mile trail seemed at times. Our descent down to the beach, where the falls flowed into the ocean, felt crowded. The drop-down to the beach felt like the most challenging part of the hike on the trail. Coming back up from the sea seemed steep but short. The rest of the path leveled out with some noticeable uphill grades.

With the crowds came litter, radios, boomboxes, and portable speakers. I was shocked at the flagrant careless regard for nature some of the hikers displayed. All of which are prohibited on the trail to maintain the wilderness character. I am asking hikers to please follow the rules. Wilderness is a haven—protected and managed to allow for relaxation, resourcefulness, occasions for retreat, refuge, and natural quiet.

After the long hike of wilderness blue, we drove north for about 45 miles, where I secured two nights at Bodega Harbor Inn. I found the inn through Hotel.com. It was a simple and easy process to reserve a room. I called the inn twice before we left for our trip, asking questions about the place and location. The woman on the phone came across pleasant, helpful, and resting any of my worries or concerns. Her friendliness and understanding put me at ease. I knew I had picked a perfect place for my family to stay.

The drive to Bodega Bay on Highway 1 was open and curvy, with lots of greenery and small towns. I probably would have noticed more points of interest, but all I cared about was getting to our lodging for the next two nights. Once we arrived at the inn, the woman at the hotel desk came across so friendly and caring. I wish I could remember her name. Throughout our stay, she continued going above and beyond customer service. I will tell you more about that later.

With keys to our cute two-bedroom room, we relaxed with an open front room overlooking the bay. The place worked for my family. The cozy space offered a wood-burning fireplace. Starved, we all quickly shower and head over to the recommended Lucas Wharf Restaurant.

It's a Monday night, and right away, we are seated at a table by a window with a panorama view of Bodega Bay. I see quite a few locals occupying the tables. That's a good sign that we are in the right place.

Dinner was tasty, relaxing with decent service. While we ate, we watched local fishers bring in the crab. It was entertaining watching the men pick up the crabs and skillfully avoid getting pinched by their claws.

"The Birds" Directed by Alfred Hitchock

With my belly full and my family asking me about the rest of our trip, I shared some history about Bodega Bay. We admired the Bodega Bay weather. It was breezy and pleasant.

I enlightened my family on how the place is famous for being the location where Alfred Hitchcock filmed scenes for his movie The Birds starring Rod Taylor, Tippi Hedren, Jessica Tandy, and Susanne Pleshette. I get this bright idea. “Let’s watch The Birds when we get back to the inn.”

My daughter never saw the movie, and she brightened up on my idea. We talk about the shelves of DVDs in the inn’s reception area. “They must have a copy of The Birds.”

On our way back to our room, we stop at the front desk. Sure enough, they have a copy of

The Birds. We head back to our room, pop in the DVD player and watch a great movie that takes place in Bodega Bay. After the movie, we slept through the night. Quiet, without a sound heard from the inn.

We woke the next day in search of a decent coffee shop. We found Roadhouse off Highway 1. We enter the establishment, where six fishermen sat in eclectic chairs resembling several different styles of kitchen chairs. They seemed surprised to see us, as did the older gentleman behind the barista machine.

The place didn't appear dirty or clean but cluttered with unattended game boxes, shelve of business cards and fliers, hocking real estate, yoga classes, and therapeutic massages. Behind all the clutter was an autograph picture of Tippi Hedren in a scene from The Birds. She addressed the autograph to John.

The fishermen returned to their conversation about an engine; one of the fishermen was trying to repair it. We ordered our drinks and were surprised that the place had almond milk. The older gentleman making our drinks seemed surprised as well. He didn't look like someone who worked in a coffee shop. He looked more like he belonged out on the bay with his fishing boat. The coffee drinks were better than average, and I was so happy to have caffeine coursing through my veins.

What to Do in Bodega Bay

We left with our drinks and walked a short block reading the closed signs, “Open Thursday – Monday,” which meant the town was going to be quiet during our stay. I discovered later most of the businesses closed on Tuesday and Wednesday.

We had a simple breakfast and hit the Red Hill trail starting from Shell Beach off Highway 1.

The steep grade at the beginning of Red Trail seemed nothing like yesterday's hike down Wildcat Beach and back up the main trail at Alamere Falls.

No, this was an easy hike with no one but my family on the trail. We incidentally saw a couple of people. We saw quail, wildflowers and came to a refreshing group of trees. From there, we wound around and came back down the trail and savored the panorama view of the hillsides and coastal beaches.

We spent the afternoon relaxing and reading near the inn and headed to the following recommended place to have dinner, River’s End in Jenner. The restaurant serves a half-off special on Tuesday nights, which the head chef prepares for the staff and the locals. The meal was delicious, and the service was five-star. Our table had a view of the Russian River opening into the Pacific Ocean with an unbelievable sunset.

We found it hard to leave Jenner, but we knew we had something special waiting for us at the inn.

The front desk woman let us borrow her copy of

Goonies because it had scenes filmed in Bodega Bay like The Birds. None of us had seen the movie before, and it was a fun, silly movie to watch starring Josh Brolin and Sean Austin. I recommend the film because, even though it was ridiculous, the script kept the story interesting.

Schoolhouse Scene from "The Birds"

The next day we decided to be tourists, so we visited taffy shops and other knick-knack shops. We visited places where scenes filmed for The Birds took place. The only place worth mentioning is the schoolhouse. The famous scene with the blackbirds attacked the school kids running away.

Since we just watched the movie a couple of nights ago, visiting the Potter Schoolhouse was very exciting with a bit of fandom. The building, privately owned and remodeled by the family that purchased the school. It now looks like a place to hold special events such as weddings or school functions.

Seeing the schoolhouse as the setting of the blackbird attack on the school children, Hitchcock chose the correct location. The tall building on a sloping hill is haunting in a way. As a sidebar, I am curious how Tippi Hedren felt about running downhill in high heels and wearing a skirt suit.

The schoolhouse visit was our last excursion in Bodega Bay. We were packed and headed back home with a stop in Napa Valley for lunch. The lunch was uneventful, so I will not go into details. All in all, the trip started with a hike near Point Reyes, and then two days in Bodega Bay that turned out to be one a memorable trip with my family.