You may recall a recent article that I published about the glorious nature reserve that is Bempton Cliffs on the East Yorkshire coast. Well now, I've moved a few miles to the south to the rugged beauty that is Flamborough Head. It's basically an 8 mile long peninsula stretching out into the North Sea between the village of Filey and town of Bridlington, and while Bempton Cliffs can get busy with visitors, Flamborough is a place where you find a quite little spot and either just stare out to sea or engage in some seawatching- a specialized form of birdwatching. Alternatively, if you fancy something a little more active you can actually walk up and down the coastal paths, walking to Filey via Bempton or around the peninsula to the nearest big town Bridlington.

Where Is Flamborough Head? 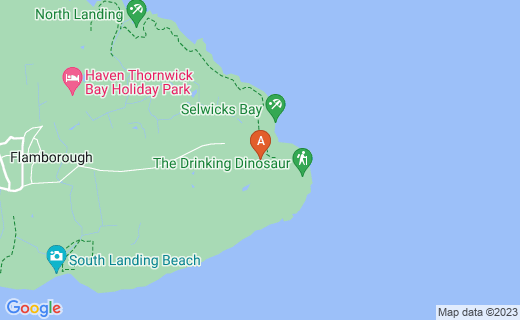 Flamborough Head lies between the village of Filey and the nearest large town, Bridlington.

How To Get There?

Whether you're journeying from north or south, Flamborough Head is very easy to find and access. Simply get onto the M62 East, then onto the A165 and follow the signs for Bridlington until you start seeing signs for Flamborough, although these signs at first are just for the village that acts as the gateway to the peninsula. In order to experience the peninsula in its full glory, you must bypass the village and head either to the North Landing, South Landing or to the oldest complete lighthouse in the whole of England.

In the village of Flamborough itself you'll see a sign directing you to turn left onto the B1255 otherwise known as North Marine Road, a straight road that takes you right up to North Landing Bay, a small sandy bay that is only accessible by walking down a very steep path. I can tell you now that it matters not whether you're going up or down, each way is tricky, hard work and potentially hazardous.

Whilst driving along North Marine Road, you'll no doubt notice Thornwick Bay Holiday Camp, a vast complex of static caravans (trailers), shops and facilities designed to keep children and adults alike entertained. On a typical visit to the North Landing though, I tend to drive to the end of the road and park up in the large cliff top car park. I have visited the beach a few times, but in order to see the North Landing in all its glory, I recommend taking the cliff top trail to the Flamborough Cliffs Nature Reserve which literally takes you right up to the edge of cliffs. Unlike Bempton though, there are no fences or railings to protect you, so I would strongly advise you to stay back from the edge, and to not venture up there during periods of high winds, storm or fog.

Alternatively if you arrive at the North Landing and are feeling a tad peckish, then I recommend dropping into the North Landing Cafe, where you can enjoy either a good beer, cup of tea or bite to eat whilst revelling in the views of the North Sea and the stream of seabirds that pass by.

The clifftops of at North Landing offer one of the best places anywhere in the UK to engage in some seawatching- a specialised form of birdwatching, that involves simply standing in one spot and recording anything that flies past. During the Spring and Autumn migration periods, almost anything could pass by, including skuas/jaegers, various species of waders, gannets, auks and sea ducks such as common and velvet scoters. During the breeding season the white chalk cliff faces are strewn with thousands upon thousands of puffins, razorbills, common guillemots, kittiwakes and fulmars. Curiously though, northern gannets do not breed on this particular stretch of the Yorkshire coast, instead they opt for the towering cliffs nearby at Bempton. You can still marvel though at the large flocks gliding past your position as they return to their cliff ledge nests. Flamborough Cliffs actually offer far better and closer views of the charismatic Atlantic puffin. Moreover, you will rarely have to compete with hordes of photographers. I've often sat on the cliffs for hours without barely seeing a soul. As well as birds you may be lucky enough to catch sight one of the sea mammals that frequent England's east coast. I've personally glimpsed both Grey and Common Seals, and I have seen reports of Harbor Porpoise and Minke Whale, but have not been lucky enough to see either one yet.

For those who are interested in other things than watching birds, then the undoubted highlight of North Landing is the small beach situated at the foot of a steep path leading from the car park. Here, you can simply stare out to sea, play in the sand, or, when the tide is out explore the rock pools and small caves that dot the bay. There is even the option of taking a cruise around to nearby Thornwick Bay for a small charge that allow you to see the famed smugglers caves, normally hidden from view. If you have a dog, then a trip to North Landing Beach is ideal for enabling your canine friend to experience the sea.

After checking out the North Landing, you may want to check out the lighthouse. In order to do that, drive back up North Marine Road back into Flamborough village then turn left onto Lighthouse Road, which will take you straight to your next destination. Flamborough Head actually has two complete lighthouses. The first is a still standing chalk tower first completed in 1669 and is now a Grade II listed building. The present lighthouse was completed in 1806 and acts as a vital marker for vessels passing between Scarborough and Bridlington. It was manned by lighthouse keeper traditionally, but has operated electronically since 1975, although the last lighthouse keeper did not leave until 1996. Admittedly I haven't spent as much time at the lighthouse as other areas of Flamborough Head, but on the few occasions I have ventured there, the one thing that caught my eye above everything else, was a toposcope situated near the present lighthouse. It was erected in 1959 to commemorate a near forgotten battle of the American Revolutionary War- the Battle of Flamborough Head.

Back in 1779, the seas off of Flamborough Head played host to one of the greatest moments in the career of famed Scottish/American naval captain John Paul Jones. Jones, who was captain of the USS Bonhomme Richard, along with the USS Alliance, was able to not only engage but defeat and capture a Royal naval ship, HMS Serapis and a merchant ship HM Countess of Scarborough.

The Battle Of Flamborough Head

The final part of the peninsula for you to explore is South Landing. From the lighthouse, go back up Lighthouse Road, once again heading back to Flamborough Village, only this time turn left down South Sea Road, following the signs for South Landing and YWT (Yorkshire Wildlife Trust) Living Sea Centre. Follow the road for about a mile or so before coming to the center and park in the car park which will be on your left. You cannot in actual fact drive any further than the center as the road narrows into a single track which ultimately leads to South Landing Beach.

The YWT Living Seas Center is basically a focal point for anybody wishing to find out more about the marine wildlife of the Flamborough. You can read leaflets, chat to the friendly and always helpful staff, browse in the gift shop and even take in some light refreshment. You can even participate in Seashore safaris or even book a trip a Living Seas Safari in a traditional fishing boat, where a member of the team will provide a running commentary as you get a sea view of the stunning Flamborough Cliffs and its birds.

Alternatively if you only intend to visit South Landing briefly then I recommend walking from the car park along the Sculpture Trail, which will take you through beautiful woodland, across a small stream, through farmland and onto the South Landing Cliffs, which offer spectacular views of the North Sea and anything that should happen to fly by. If you look to your right, you'll be able to see the town of Bridlington and the numerous wind farms that lie a little further along the coast. If you fancy a gentler walk though, then simply walk out of the car park, back onto South Sea Road down towards the beach. Its only a fairly small beach, and of course you have to be mindful of the tide, but it is a wildlife lovers paradise. The shoreline is a haven for waders such as redshank and dunlin and also gulls such as black headed and herring gulls. Although if you look closely, you may spot something rarer such as a Mediterranean or yellow-legged gull. From the beach, you have panoramic views of the sea stretching for miles, which during migration season offers the chance of spotting rarities such as a long-tailed skua/jaeger or a sooty shearwater.

Driving back down the B1255 going through Flamborough Village you will come across signs for Danes Dyke. Admittedly I've yet to explore the Dyke myself in any great detail, but am hoping to rectify that in the near future.

The Dyke is essentially a 2 mile long ditch and Local Nature Reserve coated on either flank by a swathe of mixed deciduous woodland, including the now rare English elm tree. These in turn provides vital shelter for woodland birds and other animals, and is often the first stop for winter migrants from Scandinavia including thrushes such as fieldfares and redwings.

On first glance, you may think that Dyke has Viking origins on account of its name, but its history actually stretches back into the deep mists of time, before recorded history. The famed archaeologist Pitt Rivers excavated the site in 1879 and found a series of ancient arrowheads. These have since been dated to the Bronze Age, making them at least 3000 years old.

A Guide To Danes Dyke

If you read my recent article on Bempton Cliffs, which are just a few miles up the road from Flamborough Head, you may remember that I recommended the Village Farm B&B for anybody wishing to stay in the area. I would like to reiterate that recommendation, as it is quite simply top notch, but also affordable. It is also just a few miles away in the sleepy village of Skipsea. If you happen to book a stay there between May and July, you will wake up to both the sight and sound of dozens of common swifts wheeling and darting literally yards above your head, giving you your own free aerial display to start the day off with.

So that's Flamborough Head, hopefully I've inspired you some of you to pay it a visit one day. If any of you do pay it a visit, or Bempton Cliffs or anywhere else on the East Yorkshire coast then feel free to comment below or drop me an Email.