Visit Monet’s Garden In Giverny To See His Lily Pond

Travel to Giverny, France to visit Monet’s house and garden where you can see the water lilies, flowers and rural area he loved so dearly.

I really like Monet’s work, and the series of water lilies paintings are my favourite, so a trip to Giverny was on my must-do list for a while. It is also a great place to see if you like gardening because Monet loved his flowers and grew them in abundance here.

Monet’s house and garden are open to the public from the 1st April until the 1st November each year and round 500,000 visitors go there per annum. The village is called Giverny, a picturesque place in Upper Normandy roughly 75km northwest of Paris.

Monet moved to this part of rural France in 1883 with his second wife, Alice, and eight children. He discovered a passion for botany and created an extensive garden over the years. Many parts of the landscape were used as the subject in his paintings. He lived happily at Giverny until his death in 1926.

The gardens are split into two parts, the garden at the front, the Clos Normand, is about a hectare in size and is crammed with tulips, lupins, irises, crocuses clematis and lots more. Monet planted in groups of colour and left the flowers to grow in a free-form way, so although there is some order to it, there is also a feeling of nature doing its own thing. The colours are outstanding and the eye is drawn this way and that as you walk around. Down the centre is an archway of iron structures which roses are climbing up and over. Underneath this a carpet of orange and red flowers, so as you peer through there is colour 360 degrees.

Across the road is the Japanese water garden. 10 years after he moved to the house, Monet bought the neighbouring piece of land and began building a pond. He had a Japanese bridge built over it, this bridge has appeared in his paintings too. The walkway around the pond was planted with tall grasses, bamboo and weeping willows, inspired by Japanese prints he collected. This garden is cool and sheltered, very private and a peaceful place to reflect. Even though there were lots of people there on the day I visited, it was very still and quiet. Monet painted the water, the lilies and the trees over and over again. He was amazed at the differences he could see as the light changed, as the seasons moved on and how the weather affected the reflections, the colours and the shadows. This series of work, the proper title being Nymphéas, is made up of 250 oil paintings many of which are on display in galleries and museums all over the world from Paris to New York, Tokyo to Toronto. Some are in private collections and fetch huge sums of money when they come up for sale. One painting was sold in 2014 for $24 million.

Monet’s House remains mostly how it was, thanks to a huge restoration effort. After his death, his son Michel owned the house and garden but it was left neglected. The Second World War destroyed a lot of the gardens, the greenhouses were shattered and the plants had begun to take over. Today there is a lot of original furniture, the decoration has been put back as it was, and some of Monet’s paintings are on the walls. It is interesting to see the French way of life back in the early 1900s, the large windows and handsome balustrade make for an idyllic rural life.

The entrance cost for 2015 is €10.20 for adults and €7.50 for children and students with student ID. Long queues form to buy the tickets on the door, but you can buy them online in advance to skip the lines if you prefer. Heading there early in day is often a good idea, but at Giverny a lot of others do this as well.

I spent about 2 hours in total at the house and gardens. You could whizz around in half an hour, or you could spend much longer if you like to take time over each area of planting. There are plenty of places to sit a while and just look, lots of little nooks and crannies to investigate. You could go around several times if you wished. For photographers, there are so many beautiful pictures that can be taken. The colours, shadows and light are incredible, so don't forget your camera.

There is a gift shop laden with all kinds of souvenirs. Books, fridge magnets, umbrellas, pens and so much more. There is a lot of merchandise with Monet’s artwork on it. I was happy with a camera full of photos to be honest.

What else is there to do in Giverny?

There is a lunch cafe next to Monet’s Garden, it was nice enough but very very crowded and a bit over priced. There’s a little garden centre there too to browse around.

A stroll down the road and there is the Museum of American Art which opened in 1992. It’s a fairly small gallery with a modern garden to look around too.

The village has some tiny antique store to browse around. You need to walk around the back streets to find them.

Then there is Monet’s tomb. It is in the graveyard of the tiny church there and it’s rather humble and quiet.

Hotel Baudy is a restaurant which gets mixed reviews. Right in the middle of the village it is a nice, grand-looking building. Famous artists stayed here in its day, all desperate to spend some time with Monet himself. They have a very French menu, and it isn't cheap, but it is an experience to dine there. There is a nice outside garden where you can enjoy an aperitif or a night cap if you don't want to eat. I went there the second night of my stay on Giverny and spent a lot of my evening people watching, which was great fun.

Where to stay in Giverny near Monet's garden

There are a number of Bed and Breakfasts dotted around the village, mostly run by local families making the most of the tourist traffic. I stayed in Coin des Artistes which had a few rooms in the main house and a couple of little out houses all overlooking a courtyard. We stayed in a out building where we had self catering facilities as we stayed 2 nights and ate in for one night and at a local restaurant the other. It was absolutely lovely, very typically French and just a pleasant walk from Monet’s garden. Highly recommended.

There is La Musardiere which is a family run hotel with three floors which is a quick walk away from the gardens.

In nearby Vernon there are a number of larger hotels, however there are non of the large chains that we are used to.

How to get to Monet's Garden in Giverny

I travelled from England on the Eurotunnel which you pick up in Kent. After arriving in France it’s roughly a 180 miles via Rouen. It took about 3 hours to drive altogether, we took a large picnic of treats to eat along the way with provisions in the cool box for an evening meal on arrival.

From Paris it’s a little over an hour’s drive so it could be done as a day trip from there, or as a pitstop on the way to or from the city.

There’s a station at Vernon and you can get a train there from Paris and Le Havre. There is a shuttle bus service from Vernon to Giverny in the summer months.

Where is Monet's Garden? 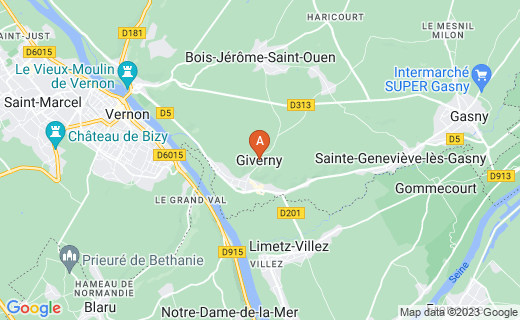