Fort Kochi and Mattancherry are the apt destinations if you love to make a walk through the colonial history of India. A visit to these places will teach you a lot about the rich past of the Jews, the Dutch, the Portuguese and the English community and their cultures prevailed in the area. Fortunately, all these landmark sites are well preserved and present some wonderful pictures of the rich and mixed colonial history of the bygone era even today.

Both these places are in Ernakulam district, which is almost on the middle point of Kerala.

There are mainly two Railway stations in Ernakulam- Ernakulam North (also known as Ernakulam Town) and Ernakulam South (Ernakulam Junction). You can alight at any of these stops and reach Fort Kochi and Mattancherry by Bus/Car/Auto.

Plenty of private buses (painted red) making services to Fort Kochi & Mattancherry. It will take nearly 20 to 30 minutes to reach there from any of the above railway stations. The bus is the cheap option as it charges just Rs.15/- or even less. It will be fine if you reach first at Fort Kochi and from there move to Mattancherry. From Fort Kochi, you can reach Mattancherry by auto or taxi. If you don’t mind, walking also a good idea since it is just two km away. Before hiring taxi or auto, fix the charge with the driver or they may demand a higher rate later. But no such issues, if you go by autos from the Prepaid Counter Bay, outside the railway stations.

Nedumbassery International Airport is the nearest airport. It is situated between Angamaly and Aluva towns of Ernakulam district. The airport is 30 km away from Kochi.

A unique feature of Kochi is its ferry service. Kochi can be connected by ferry easily. Service starts from 6.30 am and ends at 9.30 pm. It is very cheaper too. Also, this trip offers you a memorable experience of the fascinating surroundings.

Fort Kochi is the oldest European settlement in India. The first European navigator Vasco da Gama though landed in Kappad, Kozhikode in the year 1498, he concentrated and lived in Kochi with trade interest. He died on the Christmas Eve of 1502. His body was buried here. But his remains were shipped to Portugal fourteen years later.

It will be interesting to know the period of European settlement in Kochi, which is stated below:

(The European settlement came to an end since 1947 when India got independence from the British Raj that year).

Apart from the above, Fort Kochi and Mattancherry have a unique place in history with the largest concentration of the Jews. Mattancherry still has a Synagogue and a dwindling Jew community. You will also find some of the oldest churches and mosques in India here. The photos and videos appended with this article will vouch for these claims very much.

This spectacular sight is a landmark of Fort Kochi. You can take photos and mingle with the local fishermen, who are engaged in fishing. The people are so friendly and pleased to answer your queries. They will even allow you to work with them on these nets, which is a hilarious task requiring good skill and labor.

It is believed to be the oldest European built church in India. It was constructed in 1503. The highlight of the church is the tombstone of Vasco da Gama, the first European sailor to India. His body was first buried here before transporting to Lisbon. It is a wonderful structure of ancient architectural style and a must see one. The church became a protected monument in 1923 under the Protected Monument Act of 1904.

This cemetery is a landmark of the past colonial presence in the area. It was the graveyard of the Dutch traders and soldiers. You can just watch it from outside the gate as it is locked, may be to preserve its historic value. Photography is allowed from outside the compound wall. It was constructed in 1724. The cemetery is now owned and maintained by St. Francis CSI Church, Fort Kochi.

Built in 1506, the Basilica presents the architectural beauty of the olden time. You can find here the artifacts of various eras in Kochi.

This is believed to be the oldest active synagogue in the commonwealth countries. It was built in 1568. The synagogue conveys the story of Kerala’s religious tolerance and the good presence of the Jew community at that old time. The ornate central chandelier, Hebrew calendar and scrolls are the notable sights here.

The place was presented as a gift to the Raja (King) of Kochi, Veera Kerala Varma (1537-61) as a gesture of goodwill by the Portuguese in the year 1555. The building got the name ‘Dutch Palace’ for it was the Dutch, who renovated and beautified the place in 1663. It is a fine mansion of wood in Kerala style. It is now a Museum preserving coins, murals, rare paintings and other objects used by the Rajas of the 16th century. You will also see a temple here by name Pazhayannur Bhagavathi Temple dedicated to the deity who was the royal guardian. The museum is in the garden of Bishop’s House. Artifacts from different churches from the region are displayed here. It is spread on different story’s (floor) denoting different names like Altar, Treasures, Procession, Civil Life and Cathedral. You will find here some Portuguese-influenced collection of altars, crosses, chasubles, etc., of the 16th century. This museum preserves the heritage of one of India’s earliest Catholic communities.

The township around the Jewish Synagogue is full of shops which sell spices and antiques, rare glass and beads. These shops have a good stock of amazing antiques, which you can’t find anywhere.

The beach is so beautiful and a popular hangout place. Along the beach, you can see the colonial bungalows retaining the ambiance of the bygone era.

Kochi known as “The Queen of Arabian Sea” is a picturesque and engaging destination for a traveler. Apart from these two places, Kochi has a multitude of fascinating locations, which I will cover in my future hubs. I am sure the History buffs will definitely consider a trip to the Fort Kochi and Mattancherry a worthwhile one. And my mission was just to serve you as a guide to these exotic as well rich heritage sites.

Hope you enjoyed this historic safari with me. 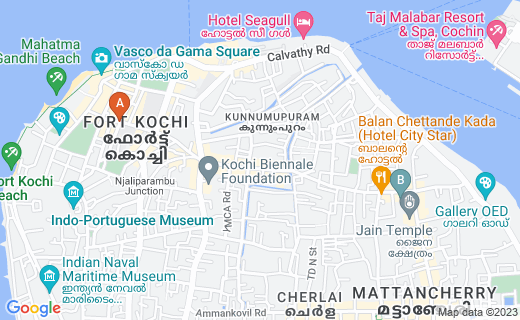 My Other Articles Related To History/India Travel