What Galleries, Museums and Places to See in London are Free

Art is Very Accessible in London

London can be an expensive place to visit. Hotels here have some of the highest room rates in the country, taxi fares are eye watering and your restaurant bill will normally be much more than you’re used to. That’s probably the same for all capital cities around the world. But what is different is the amount of art you can see for free in London - loads of it is on offer, some by famous artists and others by unknown talent.

Some of this 'access for all' ideal comes from the philosophy that art needs to be seen by everyone and the best way to make that possible is by removing an entrance fee. Also, it is believed that national art collections belong to the nation so they must have free access to it. The upkeep of the galleries and the work within them is funded by donations on the door, Government contributions, special events, sponsors from wealthy patrons and charging to see special exhibitions which are optional to visit. All of the galleries have great cafes, restaurants and gift shops and the profits from these go back into the general cost of running things as well, so consider grabbing a coffee, sandwich or souvenir from here if you can.

The National Gallery is a splendid building in Trafalgar Square with grand pillars and steps out the front to entice you in. The interior alone is beautiful, so look up and down as you enter, there are glorious mosaic floors and stunning ceilings to take in too.

There are some great masterpieces housed here by some of the best artists in the world, and it is wonderful that we can just wander in off the street and take a few minutes to look at them. Paintings by Botticelli, Michelangelo, Raphael, Titian, Rubens, Rembrandt, Turner, Degas and Suerat, to mention just a few, are hanging on the walls of this gallery. Plus Van Gogh’s sunflowers are here alongside Monet’s WaterLilies, which are some of the most recognised pieces of art on the planet.

The nearest tube is Charing Cross, and you can walk from Leicester Square if you are already in this part of London.

Just outside of the National Gallery, in Trafalgar Square, is the Fourth Plinth. This is quite fascinating - there are four plinths, one in each corner of the square, and this last one was meant to have a statue of William IV on top. Funds for making it ran out and so this plinth was left bare for 150 years. There was much debate over what should adorn the Fourth Plinth, and in the end it was decided to have it as a temporary display place for modern statues. There’s been a huge ship in a bottle, a rocking horse, and a massive blue chicken up there. In 2009 Antony Gormley decided to display One and Other, which was a look at the common man. He enlisted 2400 members of the public to stand up on the plinth for one hour each, and do what ever they wanted. There was a live feed, security, and a lot of spectators. More on the Fourth Plinth here. 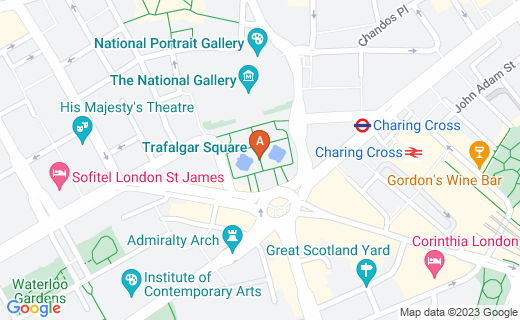 The National Gallery and Fourth Plinth

The National Portrait Gallery holds a staggering 200,000 portraits. You can see images of Queen Elizabeth II through time, both formal and relaxed. Lots of other Royal subjects, Churchill, the Freud family and heads of state all have their images captured here. It’s found in St Martin’s Place, walking distance from Trafalgar Square.

Tate Britain shows mostly British art from 1500s to present day. On display are great masterpieces by Thomas Gainsborough and more modern work by Francis Bacon, Henry Moore, Damien Hirst and David Hockney. This museum is over in Millbank.

Tate Modern is housed in a massive warehouse building right next to the Thames across from St Paul’s Cathedral. Get there across the Millennium Bridge, or the nearest tube is Blackfriars. Here the weird and the wonderful can be spotted. There’s video art, creative installations and wall hangings to boot. Picasso has space, like the Weeping Woman and Three dancers. Salvador Dali, Jackson Pollock, Max Ernst and Henry Moore can all be seen too. There are often a few large-scale works outside the building, and many people sit on the lawns to view them without going inside. Just along the river from here is the London Eye and the Southbank area of bars, restaurants and street performers too, so this part of the city is great to walk along.

The Saatchi Gallery in the Kings Road area of London displays unconventional, present day and undiscovered artists. Tracey Emin, Andy Warhol and Damien Hirst have been promoted into the limelight by Charles Saatchi and their work can be viewed here. It is quite a small gallery and the displays are changed regularly. It is a great place to view new artists' work, and it’s in a really lovely location as well.

The Wallace Collection is housed in a beautifully adorned building. The Collection was put together in the 18th and 19th Century by Wallace, and left to the nation. It’s just off busy Oxford Street and specialises in rich, opulent and sumptuous paintings, sculptures, porcelain and glass. There’s a lot to take in but The Laughing Cavalier and Rubens The Rainbow Landscape are some of the most famous pieces.

The Bayswater Road Artists will bring you back to more affordable and attainable art. Every Sunday, no matter what the weather, these artists hang their work on the railings of Kensington Gardens and create an outside gallery. There is all sorts of art to see, and it's spread a long way down this road so you can spend hours taking it all in if you want to.

The artists themselves are there to talk about their art, and every piece is up for sale for you to take home immediately. The nearest tube station is Queensway and there’s the park to walk around afterwards and a limitless supply of cheap eateries and bars close by too.

There are thousands of statues around London, so it pays to look up as you walk around. The parks have quite a few of them, like Peter Pan in Kensington Gardens which is adorned with squirrels, birds and rabbits, and there’s the Albert Memorial opposite The Royal Albert Hall. There’s a statue of Churchill and Roosevelt seated on a bench in New Bond Street and a grand image of Richard the Lionheart on horseback near Westminster.

Street art can also be seen on walls, bridges and sides of buildings. All the Banksy art has been removed, but there are others to rival these.

Spend sometime enjoying your favourite genre, artist or period in history by visiting some of these spectacular places. It feeds the mind and soul while you save a little cash.