Wendy went to France for the first time on 1999 and loved it so much that she moved there in 2005. Today she lives in the French countryside

The Château-Observatoire Abbadia is one of the most important examples of French Gothic Revival Architecture, an architectural movement that began in the late 1740s in England. You can visit it all year round in the town of Hendaye the most Southwest town in France before you reach Spain. It is located in what is known as the French Basque Country.

Panoramic View Of The Abbadia's Castle

The Observatory Castle of Abbadia

The first thing that you notice when you arrive at the castle is the magnificent location overlooking the Atlantic coast. After that, it is the Neo-Gothic building that captures your attention. Come with me for a few minutes and discover this marvellous work of architecture. A dreamlike place that transports you to a world of romanticism lingering for times gone by.

The Observatory Castle Of Abbadia, The Origins

Although Abadia looks like a gothic castle, it was built at the end of the 19th century by the famous architect Eugene Viollet-le-Duc, the same one who worked restoring the medieval city of Carcassone and the Notre Dame de Paris. He was under the orders of Antoine d’Abbadie a famous traveller, ethnologist, geographer and scientist.

The castle was built in about 20 years, but to achieve the medieval look the architects used several “tricks” like using limestone from different colours and places to give the impression of building through hundreds of years as they did during the medieval period.

Something else to notice is that Antoine d'Abbadia used Basque builders and artisans to build his castle as he was conscious of the importance of his project for the rural economy. The materials also came from the area, like limestone from the Basque coast.

The Castle is divided into three wings with the entrance in the middle directing the visitors to the three main wings: the observatory and library, the chapel and the personal rooms.

To understand the meaning of the castle, it is important to know first a little about his owner, the man who had the Observatory Castle built to his exigencies.

Antoine d’Abbadie was born in 1810 in Dublin. His mother was Irish and his father came from the Basque country. He was a scientist deeply attached to his roots and we can see this influence on his castle, sometimes through the style of the buildings, like the façade in Irish neo-gothic style. Other times on the symbols used on the decoration, like the clovers, symbol of his natal Ireland: or through inscriptions in English and in Euskara, the Basque language.

It is important to mention that Antoine d’Abbadia spent 11 years in Ethiopia where he drew the first map of Ethiopia and also worked on the Ethiopian language. We can see his Ethiopian influence in the castle through frescos and decorations.

Another important feature of Antoine d'Abbadia was his works on astronomy as his castle shelters an astronomical observatory, which kept operating until 1979. When Antoine d’Abbadie died in 1897, he left his castle to the Academy of Sciences, which is still the owner today.

The Outside Of The Abbadia’s Castle

The outside walls of the castle are richly decorated, with animals carved on limestone. Sometimes we see again these same animals carved in the interior on other materials. All these animals remind the visitor that Antoine d’Abbadia was a world traveler and although we are told that they do not hold any special meaning it is difficult to imagine that they are placed there on a whim.

The Animals Carved On Stone At Chateau d'Abbadia

The Main Entrance Of Chateau d'Abbadia

On the main entrance, we can read a Gaelic inscription welcoming the visitors. The use of Gaelic reminds us of Antoine d’Abbadia’s Irish roots. The entrance is also guarded by his emblematic greyhound wearing a collar with his owner’s initials V (for Virginie, Abbadia’s wife) and A for Antoine d’Abbadia. Further, we can also see two big crocodiles carved to protect the Domain.

If you are careful you can also see a hole in the entrance’s wall. This hole is directed to the Rhune mountain in front of the castle and goes all the way through the castle walls to the observatory. It was part of an experiment which failed, therefore, above the hole, Abbadia wrote “I saw nothing, I learned nothing”

The first impression when you enter the Castle is how dark it is –especially on a sunny day. We are told by our guide that the darkness has the purpose of achieving a romantic mood. The main stairway is adorned with a highly coloured gothic stain-glassed window, displaying the family coat of arms and the motto “To be rather than to pretend to be”.

Supporting the main stairway you can see a bear. There are also Ethiopian shields and animal horns hanging on the walls. Along the main beam of the stairs, we can read a beautiful poem welcoming visitors. On the top of the stairs, we can admire some romantic frescos representing Ethiopian life as well as a wooden statue of Abdullah –a young Ethiopian slave given to Abbadia. The statue reminds us of the Statue of Liberty in New York.

From this hallway, you can reach the whole castle.

The Observatory of Abbadia

The Observatory is the next stop on our visit. We go behind the stairway through a narrow corridor which takes us to a luminous room: the observatory. This is the biggest room in the castle bathed with loads of natural light. From its enormous windows, we can see the cliffs of Hendaye. The décor here is minimalistic, to avoid distracting the scientists who worked here.

In the middle of the room, we still see the marks of the printer used here to print the results of the measurements and investigations. Unfortunately, the printer was the first thing destroyed when the German troops occupied the castle during the war. The rest of the castle was kept intact, except for the park savaged by the German troops.

Meridian Lens At The Observatory Of Abbadia Castle

From the Observatory, we climb up a narrow stair to the library. A place that symbolizes Abbadie's encyclopedic vision of life. We are told that this was the only room occupied by the German troops during the war as it has and advantageous view of the coast. I try to imagine them here, sitting around the big rectangular table covered with different machines used for doing all sort of calculus.

The shelves holding the books run alongside a wooden gallery made of chestnut. Heavily bolted iron frames support the gallery in a design which foreshadows Art Nouveau work. The lower level is filled with scientific texts, most of them printed here; while the upper level was kept for Abbadia’s personal use.

When Antoine d'Abbadie left his chateau to the Academy of Sciences in 1896, there were more than 10000 volumes in the library, from which 960 books written in Basque (most of them about the Basque language) and 234 ancient manuscripts written in Geez, an ancient Ethiopian language. This collection has been transferred to the French National Library in Paris where they are considered as the most valuable ones.

From the library –on the second floor- we go through a small corridor and reach the main bedroom. Coming out of the library on the way to the bedroom, I notice again the greyhound, symbol of Antoine’s faithfulness to his work and his wife.

The bedroom is absolutely charming, decorated in blue. It has two annexes: one sort of balcony over the chapel (to attend mass without being seen) and the other one is a boudoir.

The bedroom is furnished with made to measure furniture. Here, the windows are also covered with stained-glass windows to create a romantic intimate mood. In front of the bed, there is a fireplace with an inscription saying that passion is like fire. The entire room is covered from wall to wall in blue ornate silk. On the beams in front of the table, we can read an extract of a poem in German.

Château Abbadia : The Main Bedroom, The Jerusalem And The Ethiopian Bedroom

The Ethiopia And The Jerusalem Bedrooms

The Guest Of Honour’s Bedroom

From the main bedroom, we are directed to another wing of the castle to visit the guest of Honour’s bedroom. This is also known as the Emperor’s bedroom –in allusion to Napoleon III who was meant to come to put the last stone in the building. The room is decorated with unique items of furniture, in black stained wood, made to measure to fit the rounded walls.

The next stop is the main Lounge on the South tower. The walls here are painted in blue and gold gothic script where we can see the monograms A(for Antoine) and V(for Virginie, Abbadia’s wife).

The fireplace is the main element of the décor in this room. Although we also are made to notice that the furniture in the room is of invaluable value. Above the fireplace, we see Antoine d’Abbadie’s coat of arms with his personal motto “ To be rather than to pretend to be” boxed and emblazoned on a decor symbolizing the pilgrimage to Compostella. On the mantelpiece, we read a Latin quote “Life is but smoke”. Attached to the main hall there is a small boudoir or smoking room decorated in Arabic style.

We come to the end of our guided visit. On the Est wing, we find the chapel which was large enough to hold a small crowd of local farmers in the estate and its surroundings. The chapel is made in a “trompe l’oeil” style to make it look bigger and heavier than what it really is.

Here we see again the exquisite stained-glass windows that are used all over the castle to create a medieval feel.

Antoine d'Abbadie and his wife rest in peace in a crypt lodged below the altar.

Château d’Abbadia, View Of The Chapel

Castle Observatory Abbadia. How To Get There 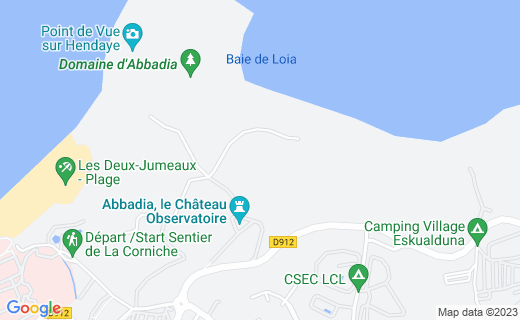 Did you Enjoy Abbadia's Castle?

Did you enjoy your visit to the French Castle of Abbadia?

5 out of 5 stars from 1 rating of French Castle, Chateau d'Abbadia