Bora-Bora, Moorea and Tahiti these names are synonymous with tropical paradise. It is said a visit to French Polynesia is like entering an alternate universe where dreams and reality are one in the same. Known though out the world for its mystery and exotic allure, a trip to French Polynesian will be a memorable lifetime experience. These islands are thousands of mile away from all mainstream lands, making French Polynesia a great place to relax, recharge and most important get-away-from-it-all.

The French Polynesia Islands are located 4,900 miles east of Australia and have a total land area of 1,622 square miles, spread out over 965,000 square miles of the south pacific. Its one-hundred twenty islands are divided into six groups, with the Society group being the best known. Visitors come to these islands for the spectacular views, flora, beaches and the translucent- turquoise waters.

Moorea is part of the Society Islands and is considered the second most visited in the group.This island is a short ferry ride from its sister island Tahiti. It is here you will find some of the best public and private beaches in Tahiti.

Weather you visit Teavaro public beach or Hauru Point you will find warm temperatures and a great selection of beaches for swimming and relaxing. Moorea is a beautiful island to visit. The scenery and the island's foliage covered saw-toothed ridge peaks are unforgettable.

Tahiti is sometimes called the "Island of Love." This mountainous island is the largest among the French Polynesia Society Islands. Also, Tahiti's interior has streams, deep valleys and waterfalls, all covered in green-foliage. The coastline is rugged and is home to a variety of tropical flowers. In addition, this island is known for the variety of activities too. For the visitor there is Jet-Skiing, swimming, snorkeling and sailing. Also, for the land-lover, there are nature hikes and 4x4 safaris. If you are looking to relax, there are plenty of beaches too. For the bird watching-enthusiast, fifty-nine of the 90 species of birds found in the region, are here. What ever your future travel plans are in French Polynesia, visit Tahiti.

Huahine is one of Polynesia's best secrets; this island is roughly thirty minutes via plane from the island of Tahiti and is known for its lush forests and quiet villages. Although popular destinations such as Bora Bora or Tahiti get more attention, Huahine is just as beautiful. This island has the same bays and mountains that rival many of the surrounding islands. Because Huahine is not a mainstream tourist destination, it has the feel of old Polynesia. One good thing is how unhurried the residents are; they are known to greet you and take time to talk with visitors. Some popular activities here include: snorkeling, diving and Jet-Skiing.

Maupiti is sometimes called the "Little Cousin" of Bora Bora. If you are looking for an undeveloped destination, this is it. You wont find any of the large resorts, bars or discos here, only an unspoiled island and true relaxation. Popular activities here include hiking, 4x4 safaris and deep sea fishing. Like Bora Bora, Maupiti is a mountainous island towering over the waters of its lagoon. Also, for the visitor wanting a challenge, you can take a three hour hike to the top of Mt. Teuraffatul, to enjoy the breathtaking view of the surrounding lagoon and Bora Bora. If you are an Eco-tourist or an average tourist, you will enjoy a visit to this unspoiled Polynesian gem.

A visit to Bora Bora is an experience in itself. This is a relaxing place to be and a great island to experience; a vacation here will be a lifelong memorable event. The lagoons and beaches are some of the best attractions. Also, some popular activities include: jet-skiing, windsurfing, scuba diving & snorkeling. Bora Bora is one of the most beautiful island in the world. Although in recent years the island has become a bit over-run with tourism, it is still an island of breathtaking beauty. In addition to its beauty, Bora Bora continues to be one of the world’s better known islands. Visitors here will find everything you would expect in a great tropical vacation.

Raiatea lies inside of a barrier reef with its sister island Tahaa. This island has a lot of fascinating legends, history and folklore attached to it. Raiatea is home to some important archeological sites; it is believed the starting point for the organized migrations to Hawaii, New Zealand and other islands originated here. Therefore, the cultural and historical significance of this island cannot be understated. Some activities available here include: snorkeling & diving, Jet-skiing and Sailing. Other land-based activities include: hiking, 4x4 safaris, and visiting the archeological ruins.

Tahaa lies inside of a barrier reef with its sister island Raiatea. Tahaa is sometimes called the "Vanilla Island," for the strong aroma of vanilla bean production; an estimated eighty-percent of Tahitian vanilla is grown there. Tahaa is slightly smaller and less populated than Raiatea. The two share a lagoon that is rich in sea-life, making this the place for divers to observe sharks, eels, and napoleons. When visiting Tahaa, if you don't like your current dive site, there are other dive-sites no more than twenty minutes away. In addition to diving other popular activities include: windsurfing and outrigger canoeing. Lastly, the waters of Tahaa and Raiatea are world famous for their yachting and sailing. 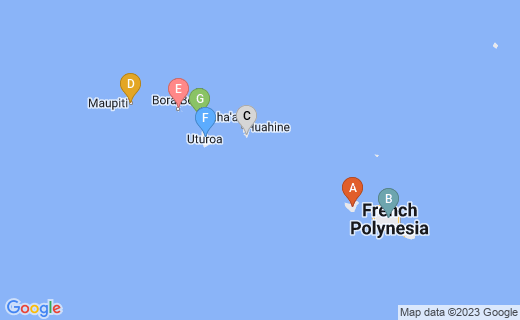