The French Castle of Montbrun

I love Limousin! Every day I give thanks that I live in this beautiful region of France, but it was only when I really began to research into the history and culture that I began to fully realise how many wonderful things were right here on our doorstep.

One of the most famous sons of History associated with this corner of France is Richard the Lionheart or, as the French call him, Richard Coeur de Lion. This English king fought and died in Limousin and in1984 a route was created in to link together the amazing medieval castles, churches and historical sites of the Region of Limousin and bordering departments. This link between these sites was Richard.

The castle of Montbrun, a fine example of a 15th century castle, is one of the most picturesque of these castles with its square form and round towers. Its narrow romanesque keep, close up against one of the towers, is the only slightly discordant note.

It is surrounded by beautiful parkland, and is reflected in the quiet waters of its own moat.

More French Castles in the Limousin, Charente and Dordogne regions

The Chateau of Montbrun from the air

Where is the castle?

Right in the south of the Limousin, next to the Dordogne border, in the commune of Dournazac, the Department of Haute-Vienne. The landscape is lovely and the traffic-free and tree lined roads make for a relaxed and pretty journey. The castle is within a mile from the nearest village Dournazac, and about half an hour by car from Les Trois Chenes.

350 km south of Paris and 43 km from the Porcelain City of Limoges with an international airport available.

Where is the Chateau de Montbrun? 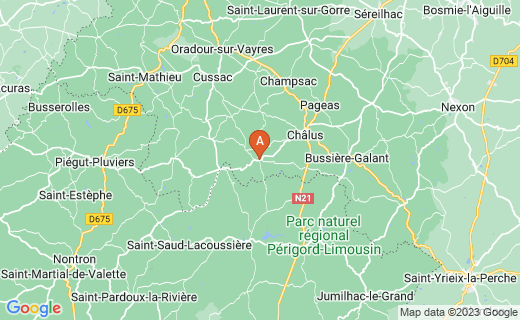 The History of the Castle

The history of the castle forms a long list of destruction followed by renovations right up to recent times. The destruction were carried out by both the French and the English or the Protestants, and each time the owning family rebuilt and reformed the fabric of the building.

The origins of the building can be traced back over 2000 years. The Romans called the lands here Trados, ’The land of dispossession’. The land was rich, and there were gold mines within the borders, and the Celts, who were living in this area at that time, built a large and complex network of interconnected underground tunnels and caves, (or cellars), possibly as a defence against the Romans. The earliest overground structure was in c. 500 when the Franks built a wooden castle tower.

The castle as we know it today, was built in 1179 by Aimery Bruni (also called Brun) on his return from the Second Crusade by orders of King Henry II of England. It is one out of only four castles from that period in France with a special history related to the Crusades and King Richard the Lionhearted from England.

The castle deteriorated as the Lords of Montbrun barely maintained the castle through the Black Death [1348-50] and the Hundred Years War [the Bruns remained loyal to the English].

At the start of the Hundred Year’s War the castle was occupied by the English, retaken by the French in 1353, and at the end of the century it was taken again by the English and partially destroyed. All that remains of that castle is the old square donjon and the well.

Montbrun was renovated beginning in 1427 by another Pierre Brun, the Archbishop of Limoges and a confidant of the new French king Charles VII, and between 1433 and 1438 the square towers were replaced with round towers and the castle took on its present form.

In 1562 (or 1569?), Montbrun was attacked by the Protestant Huguenots during the Wars of Religion and although it was not captured a fire destroyed much of the castle. During the French Revolution, at the instigation of people's representatives Borie and Brival, the castle was again pillaged and destroyed and the archives were burned. The property was divided up and sold as national property. Restored in 1871, it suffered a serious fire in 1917.

A second restoration was carried out between 1964 and 1966. Modest restoration was done in the 1960s by the last of the De la Bonnes and the castle sold in 1992 to a speculator who practically emptied the castle. In 1995 the castle and its domain were bought by Maarten Lamers, who has completely restored the castle to its former splendor.

The castle is privately owned and run as a hotel. It has been a protected historical monument listed by the French Ministry of Culture since 1946.

The Brun family, (called Montbrun after 1366) were the creators of the first real castle and remained owners until 1516. Here are some of the more colourful personalities associated with the castle:

Guy Brun, who was married to Angele, the sovereign of Pompadour, refused to submit to the authority of the King of France and remained loyal to his lord Henry the Sixth of England. Guy Brun perished during that fight and his wife Angele was banished to a nunnery

Guy’s younger brother, Pierre Brun, was appointed by the Pope Martin the Fifth, as Arch-bishop of Limoges, became the new Lord of Montbrun; under the condition that he swore faith (loyalty) to the French Sovereign. In 1430 he started on the rebuilding of the family mansion, resulting in its present form.

Pierre died on February 9, 1457 and left the castle with its lands to a second cousin: Louis Brun. In 1502, Jean Brun, the son of Louis, transformed this old and abandoned seigneurie into a chapel in the honour of Saint Andreas. It was in this chapel that he married Jacquette de Bourdeilles in 1503, the great love of his life. His father had forbidden him to marry Jacquette but upon his death in 1501, the lovers were free to be united. Their happiness would not last long as Jacquette died in 1504 during the birth of their daughter Elisabeth.

Elisabeth Brun married in 1516 at the age of 12, on the order of the French King Francois 1, to Porthus d’Estuer de Causade. Their son, Louis d’Estuer was, however a loafer who, after her death, squandered the whole family fortune with partying and gambling. To raise still more money he sold the estate with the castle on the 21st of May 1571, to the Count (earl) Francois de Lambertie. Louis died childless, drunk and impoverished, as they say, under piteous circumstances.

Francois Lambertie was on good terms with King Charles the Ninth, who transformed Montbrun into a Barony. Lambertie could now claim two titles: Count (earl) of Lambertie and Baron of Montbrun.

Almost a hundred years later, Marie, Countess of Lambertie and Baroness of Montbrun who was married to Hubert de Choisel, died childless and without heirs. The chateau of Montbrun passed to one of her second cousins: Jean the Campniac.

The last heir related to the Lamberties family, Marie de Campniac, married the Count (earl) of Conan. Her grandson, Alexis became the last Lord of Montbrun, because of the French Revolution.

Richard the Lionheart and the Castle of Montbrun

In 1199 Richard the Lionhearted, Duke of Aquataine and King of England, returned to the valley. Having been successfully ransomed by his mother Eleanor of Aquataine, Richard arrived in pursuit of the traitor Ademar [Aimar], Viscount of Limoges, a fractious Aquatainian petty noble. Richard beseiged Ademar's castle at Châlus-Chabrol. There he was wounded by a crossbow and died 12 days later, probably at Montbrun Castle. Pierre Brun, Aimery's son, commanded Richard's army which quickly burned Châlus-Chabrol to the ground.

There are many historical facts, legends and events linked to the Castle among which the claim that Richard I (the Lionhearted), 12 days after being wounded during his siege of the nearby Castle of Chalus, died at Montbrun.

The castle is steeped in History and is full of mysteries and legends.

The legend of Richard the Lionheart would have us believe that when he died his body, or various parts of it, were buried in the grounds of the Chateau. I must point out that other accounts differ from this!

The resident ghost is know as The lady in blue. They say that her ghost is still wandering around here. looking for a ring. Several of the guest who have stayed recently at the castle, insist that they have seen her.

There is also the legendary treasure that is said to be still buried here.

Believe it or not this castle is FOR SALE!

Take a guided tour of this Château for sale

Want to buy this castle?

The estate contains 165 hectares of land with several houses, barns and a tavern on the property; furthermore it has four lakes, a river and various water wells.
The castle itself has been completely renovated into the standard of modern way living without damaging the authenticity of its history;
It has satellite services, a central heating system and electricity, computer facilities, a modern kitchen brought into a rustic style, and most of the rooms have their own hot shower-rooms.

The living space contains a great hall, a house chapel, office-rooms, a music-room, a master bedroom, 15 guestrooms, a dining room, a living salon, a cinema room, a library, a billiard room, a congress room, an office room, a Jacuzzi, a sauna, servant rooms; all in a total of approximately 3500 square meters.

Famous people who have considered moving to Limousin include Angelina Jolie and Brad Pitt who have viewed the castle. More recently it has been said that the daughter of Rupert Murdoch took a peak.

Other articles about Limousin