Why Is the Greek Way of Life So Slow-Paced?

Picturesque Churches are a Typical Feature of Greek Villages

The first-time visitor to Greece soon learns that this is the bog standard reply all foreigners receive if they ask a local for assistance when anything goes wrong regarding travel plans or accommodation. Be wary. The ‘my friend,’ bit is always said first and the ubiquitous one-liner is usually accompanied by a friendly slap on the shoulder so you don't feel like making a fuss or complaining too much.

If the fridge decides to defrost itself on the very first night at your self-catering villa, your host will say, ‘is okay... no problem... is working,’ He will still try to thoroughly convince you even as the maid arrives to mop up the puddle on the floor the following morning. Fixing things is never any cause for concern because no self respecting Greek will ever admit something is actually broken.

Everything in Greece seems to run in slow motion. You could call it G.M.T. - Greek Maybe Time. It makes you wonder when anything ever gets done, if at all. Things grind to a screeching halt for a siesta every afternoon, even when a coach load of tourists with plenty of Euros to spend appears out of nowhere. If the Greeks have an Achilles heel then this is it.

With this in mind it's wise to give yourself plenty of time when travelling in Greece;make certain you arrange things well beforehand to allow for the inevitable delays the Greek way of life will bring.

You won’t fail to laugh if you get stuck behind a slow moving fire engine which appears to be in no rush at all, even though its sirens are blaring. You can just imagine the thoughts of the crew:

Is no problem... fire burn itself out before we get there... save us the bother.

Even if you're not one to make a Drachma out of crisis, you'll become increasingly frustrated with the total lack of movement and response to a situation that demands at least a little urgency. Greeks can often be a little too laid back. How do they even manage to 'urn' a living?

Another source of amusement is Greek plumbing which can leave tourists positively flushed with embarrassment; waste pipes are not wide enough to cope with toilet paper, so it's not supposed to be deposited in the toilet bowl after use, but has to be placed in a hopefully lidded receptacle nearby. But try explaining that to your children who will likely manage to forget this requirement at the crucial moment. In Greece, men are apparently supposed to sit down to urinate! After a lifetime of conducting the exercise standing up, it must be virtually impossible for a foreign man to achieve this.

Life on the islands is even more laid back. Tucked away in mountain villages where the only sounds are the tinkling of goat bells and the constant chirring of grasshoppers, it's easy to spot Greeks who are almost as old as the hills they live in. You'll soon reach the conclusion that they haven’t got to that stage by rushing around all their lives. The olive oil, wine and sunshine may have something to do with it too and the known health benefits of the Mediterranean diet. A stress-free lifestyle is always better so why rush yourself into an early grave? The Greeks do have a very valid point.

However remote your location, the locals will tell you that the nearest shop is: ‘Just along the road.’ You'll follow their directions to the letter only to find that you've walked several miles before you arrive - the shop is probably over a mountain on the other side of the island. It will most likely be closed but just as you begin your dispirited return, an absolute ancient ruin of man will suddenly throw open the shutters and summon you back. He may not have the groceries you need, but you'll find his hospitality will restore your faith in human nature by his willingness to share some of the fresh produce from his garden.

The first-time tourist to Greece would be wise to remember that appearances can often be deceptive. The road that looks perfectly good at the start of your drive to the beach will often become little more than a pot-holed dirt track that leads to nowhere. Beaches too can be deceptive from an elevated position, the bleached whiteness often gives every appearance of fine sand, but close up it becomes obvious it consists mainly of large, white, rounded pebbles which can be treacherous to walk upon.

Hiring a motorcycle in Greece may initially seem like a good idea but due to the potholed roads mentioned previously, this often proves otherwise. Road safety is virtually non-existent and the accident rate is atrocious. Again, this is never a problem and helpful locals en route will do their utmost to ensure you are retrieved from any offending pot-hole and reinstated on your bike.

Fair-skinned folk should be wary of the sun when travelling in Greece, apart from the usual annual holiday, the typical tourist will put up with a lack of sun virtually all year round then suddenly bombard their pallid flesh with fierce midday rays all in one go when visiting warmer climates, invariably burning however much lotion is slapped on. It's too much for pale skin to adapt to in the space of a fortnight so they end up with painful sunburn and sometimes even do permanent damage. Use the highest factor you can and reapply after bathing. The Greeks tend to gain great amusement from the tanning traumas of more northern Europeans and quite sensibly cover themselves from head to toe in anything black and voluminous whenever the sun shines.

It is so hot and sunny in Greece from May to October that bad weather is usually ignored by your Greek hosts but after three days of perpetual rain and a mountain mudslide in the middle of your fortnight's stay in July you will definitely be disconcerted. There may be frogs leaping around your resort pool which has since become a mud bath but your host will still say: 'Is OKAY... no problem... better tomorrow.'

Even the frequent occurrence of earthquakes does not give any cause for concern. ‘Is okay... is okay... is no problem... IS NO PROBLEM!’ God forbid if your rented villa is on a fault line and you find yourself caught up in a quake quite high on the Richter scale. You'll beat a hasty retreat from your villa, waving your arms around in despair as your host will calmly appear on his verandah, intact glass of Metaxa in hand.

‘Is anything ever a problem in Greece?’ tourists will begin to ask themselves, constantly baffled by the laid-back reactions of the locals. To some foreign tourists, this attitude can be irritating and unnerving at first, but it is just something you have to get used to and if you can see the funny side, so much the better.

Perhaps as tourists, we need to examine our own lifestyles and slow down the pace a bit more. The Greeks are not renowned for doing anything in a rush but they live long and fulfilling lives and it's wise for visitors to Greece to always bear this in mind. Don't allow inevitable delays to frustrate you and you will fit into the Greek way of life very well. So If you can't get to where you're going on time, at least try to enjoy the scenery along the way and when you arrive at your destination, sip some ouzo, nibble some olives and relax a bit more - just like the Greeks.

Shopping Precinct on the Island of Kos

The Greek Island of Kos Lies in the Aegean Sea

This TV documentary series (part one below) although made in 1983 still offers a great insight into the Greek way of life and is well worth watching especially if you are planning a trip to Greece.

A series on the Greek Way of Life

A Quick Mini Guide to Greece 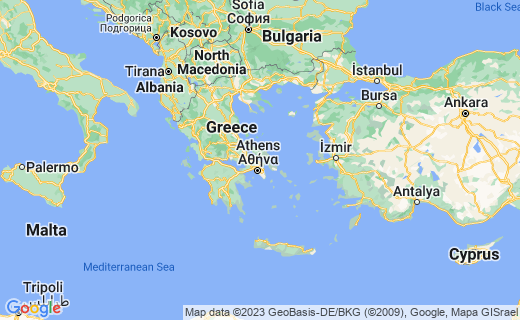 Do you envy the laid back lifestyle of the Greeks?