Mahatma Gandhi, or Mohandas K. Gandhi is India's 'Father of the Nation' was an advocate or non-violence and peaceful relations among peoples. His principles and teachings are still relevant in today's world. A tribute to his contribution to world history and the upliftment of humanity is evident in the respect given to him from people all over the world.

The Mahatma Gandhi statue is one of the peace heritage sites located in and around in the central business district in Wellington, New Zealand. The Beehive or the New Zealand Parliament buildings, the Victoria University, Bus Station and the Railway Station are also located nearby. 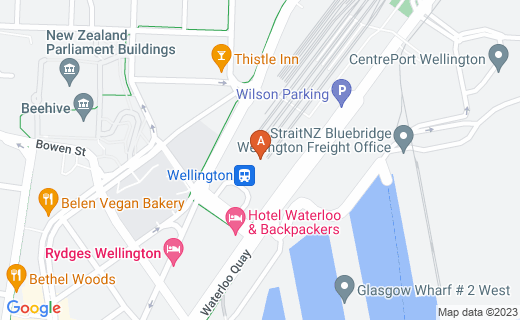 Unveiling of the Gandhi Statue in 2007

In 2007, the first Mahatma Gandhi’s in New Zealand was unveiled in its capital Wellington. It was erected on the front lawn of the Railway Station on Bunny Street. It was the gift from the Indian Council for Cultural Relations on behalf the Indian people. Mr P. K. Ernest, the Indian High Commissioner said, ‘On India's part, the gifting of the statue is an expression of our deep appreciation and acknowledgement of the commitment of the people of New Zealand for setting an example to the world of a tolerant, open and inclusive society.’

The statue was unveiled by the Mayor of Wellington, Kerry Prendergast, who said, ‘We are very touched and honoured to have this beautiful statue in our city.It is a wonderful tribute to the memory of a great man from whom the present-day world could draw a great deal of inspiration from.

‘With so much ongoing violence and intolerance in the world, the fundamental human values that Mahatma Gandhi espoused, and lived for, continue to be as relevant today as they were in his.’She said the statue was a symbol of the lasting friendship and solidarity between the peoples of India and New Zealand.

The site in front of the railway station was chosen because Mahatma Gandhi was a man of the people and travelled often by trains. The day statue was unveiled on 2 October, because it was declared International Day of Non-Violence by the United Nations, in honour of Gandhi's birth date.

The life-size bronze statue was made by the famous Indian sculptor Gautam Pal from West Bengal. Gautam Pal comes from a traditional family of modellers from Krishnanagar in West Bengal which is famous for its life-like clay sculptures.

Gautam Pal was trained by his father and then later he joined the Government College of Arts and Crafts in Kolkata. He then joined the Academia di Belle Arti di Brera in Milan in Italy and completed his diploma in 1974 working under Professor Luciano Minguzzi. After his return to India he has been working on many projects and his works are found in France, Italy, Mexico, Portugal, Canada, Myanmar, China, Prague, Yemen, Brazil, and the USA. Gautam Pal works in various media such as bronze, marble, granite, and wood.

The plaque below the statue reads: Mahatma Gandhi (1869-1948) A Mahatma of Truth and Non-violence. To the City of Wellington from the People of India.

And his words, 'We must become the change we want to see'.

The Mahatma Gandhi statue in Wellington is a reminder that Gandhian ideals and values are still relevant today. Gandhiji's life is an example to all peace workers of the world.

A statue of Mahatma Gandhi was recently unveiled by UK Prime Minister David Cameroon and Indian Finance Minister Arun Jaitley, on Saturday, 14 March 2015, opposite the British Parliament to mark the 100th Anniversary of Gandhi's return to India from South Africa.

Gandhi's teachings still hold a great deal of relevance in today's world as it did more than 70 years ago. Indian films super star Amitabh Bachan too was present at the unveiling ceremony. In the video below you can see the news clip and a short speech on the teachings of Mahatma Gandhi.

Many claim that the Gandhian ideal of Non-violence is still relevant today. Do you think issue can be resolved by dialogue rather than conflict?

Place of Interest in New Zealand

Sushma Webber writes content for both web and print media. She has worked as a volunteer in many not-for-profit organizations. She is interested in creating a balance in life between the physical, emotional, mental and spiritual aspects. She is interested in mindful awareness practices, Zen practices and translating these in daily life at work in front of the computer and during various activities of her life.