The author lives in a quiet rural community in lower Puna on the Big Island. He's an avid gardener, traveler, and photographer.

Jardin du Luxembourg (Luxembourg Garden) is the most beautiful garden in Paris.

Located in the historic 6th arrondissement, near Ile de la Cité and the Latin Quarter, it is also regarded as the most iconic public park of Paris.

The 60-acre garden is known for its symmetrical manicured lawns, colorful flowerbeds, lush chestnut groves, romantic promenades, graceful fountains, and an incredible collection of some 70 statues!

At the center of the garden is a large octagonal pool – the Grand Basin – where children float toy sailboats.

Other notable features include the Medicis Fountain, tennis courts, marionette theatre, and a centuries-old carousel that is still in operation.

1611-1612: Queen Marie de Médicis (widow of Henry IV and mother of Louis XIII) purchased a property owned by the Duke of Luxembourg (hence the name of the garden) to build herself a palace. She commissioned Florentine landscape designer Tommaso Francini to construct an Italian-style garden around the palace.

1614-1631: The garden went through numerous changes and expansions. Landscape designer Jacques Boyceau was enlisted by the Queen to re-design it into a formal French garden – with a series of parterres (square or rectangular-shaped flowerbeds bordered by low hedges) and an octagonal basin at the center of the garden.

1789-1799: During the French Revolution years, the garden basically was left in ruins. After this period, architect Jean Chalgrin (who built the Arc de Triomphe) took on the task of restoring the garden.

1848: Statues of former French queens, saints, gods and goddesses from Greek mythology were placed along the terraces. Later, monuments to writers, artists, poets were added.

1865: New metal gates and fences were built around the garden, also a greenhouse, a fruit orchard, and an English-style garden with meandering paths among rose bushes.

1940-1944: During the WWII German Occupation of Paris, the garden was transformed into a German military camp, filled with bunkers and trenches; trees were cut down, some statues were destroyed, and its flowerbeds became vegetable gardens for food.

1958: The Senate - the Upper House of French Parliament - took over the ownership of the garden and its buildings. They are credited for restoring the garden to its former glory and maintaining it as a public park – to be enjoyed by all: local Parisians, tourists, and future generations and people of all ages. 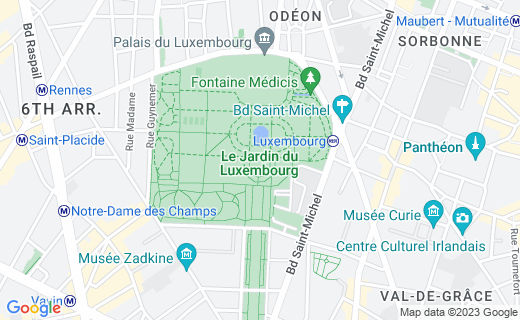 Things to Do in the Garden

Have you visited Jardin du Luxembourg in Paris?

The author felt like he was on a French movie set while visiting Jardin du Luxembourg this past summer. Within a few feet from where he sat: a lovely couple kissing passionately on a bench; a young woman crying, breaking up with her boyfriend over the phone; two attractive gay men meeting on their first date; and a group of nuns taking photo of themselves with a selfie stick. La vie est belle!

All photos were taken by the author with an Olympus Stylus TG-630 iHS digital camera.