Georgia: Ten Must See Places in the Peach State

Atlanta. Atlanta is a city of superlatives. It vies for the cultural capital of the South and is the largest city and state capital of Georgia, a financial hub of the region, well known for its impressive skyline, and a former Olympic host of the 1996 summer games. It is also a major transportation hub with one of the busiest airports in the world (Hartsfield-Jackson International), and as a federal hub has one the country’s twelve Federal Reserve Banks as well as the headquarters for the Centers for Disease Control. Its importance is not underestimated and its diverse economy is characterized by a large corporate community, federal and state government, and transportation. Historically, it’s a relatively young city even by the new standards of the United States. Incorporated as late as 1847, Atlanta was the product of multiple railroad junctions and terminals. Other cities in the state such as Augusta, Macon, and Savannah are older but considerably smaller because their location was eclipsed by Atlanta’s. Burned to the ground at the end of the Civil War by Sherman, the city saw a major siege and campaign when the Confederates attempted to defend it from Sherman’s Military Division of the Mississippi. Later the Civil Rights movement framed the city’s history and image and it was here that Martin Luther king, Jr. was born and is buried. Probably the world’s most iconic drink, Coca-Cola, was started in Atlanta in 1886 and currently the Coca-Cola Company maintains its world headquarters in Atlanta as does UPS. Famous sites in an around the city include the Georgia State Capitol, Stone Mountain, Olympic Park, High Museum of Art, Georgia Aquarium, Martin Luther King Jr. National Historic Site, the Carter Center and Presidential Library, Zoo Atlanta, and Kennesaw Mountain National Battlefield Park.

Okefenokee Swamp. There’s nothing quite like the Okefenokee Swamp that epitomizes the South. Located mostly in southeastern Georgia and crossing the stale line into Florida the swamp’s iconic scenery probably inspired many to imagine the South as a moss-draped wilderness with alligators and huge bald cypress trees that tower above a watery garden. Okefenokee translates to “bubbling water” or “trembling earth” in the Mikasuki language spoken by the Seminoles and Miccosukee tribes. The swamp is mostly in Georgia and much of the 438,000 acres is within the boundaries of the 402,000 acre Okefenokee Swamp National Wildlife Refuge, one of the largest such refuges in the United States. It is truly one of the most famous wilderness areas in the country and apparently the largest peat-based blackwater swamp in the country. Two rivers originate in the swamp, the St. Marys and Suwanee, and both drain to opposite sides of the region, the Gulf of Mexico and the Atlantic Ocean. The best access point is from Waycross, Georgia, and canoeing through the swamp is popular. Of course alligators are the most famous denizen. Stephen C. Foster State Park is located in the center of the Okefenokee and Laura S. Walker State Park is at the northern end. Both of these state parks offer camping and canoeing. Bug repellant is highly recommended in the summer months.

The Sea Islands. These are Georgia’s answer to beach resorts and tacky development that has marred the majority of Atlantic beach scene. The Sea Islands are a string of pristine barrier islands with sugar-white sand and what you won’t find are high-rise condos or hotels alongside mini-golf and board walks hawking tattoo joints and cheap souvenir stalls. The Sea Islands extend the length of Georgia’s relatively short but impressive ninety mile Atlantic coast line from Tybee Island in the north to Cumberland Island National Seashore in the south just north of the Florida line with Skidaway, Wassaw, Ossabaw, St. Catherines, Blackbeard, Sapelo, Wolf, Little St. Simons, St. Simons, and Jekyll Islands in between from north to south. The essence of these islands is preservation, both historic and natural, and where there are resorts and beach communities they are in good taste. Jekyll Island, St. Simons, Sapelo, and Tybee all have developed beaches if you plan a trip, but most of the islands are wilderness or wildlife preserves. Cumberland Island National Seashore is administered by the National Park Service and has limited facilities. It remains a haven for sea kayakers and wildlife enthusiasts. Wassaw, Wolf, and Blackbeard Islands are National Wildlife Refuges and as such off limits to development with limited access. Historical highlights include the old British fort on St. Simons Island, Fort Frederica National Monument, and Fort Pulaski near Tybee Island, a huge masonry fort that protected the entrance to the Savannah River and thus the city of Savannah fifteen miles upriver. Fort King George, now a state historic site, five miles from the coast on the Altamaha River, is the state’s oldest and was the most southerly British fort along the coast. Established in 1721 before the colony of Georgia, this earthen palisade fort lasted until 1727 and checked colonial expansion from the French and Spanish. The military tradition still lingers here and the second largest submarine base on the Atlantic coast, Kings Bay still operates as am active U.S. Navy base near the town of St. Marys.

Savannah. Laid-out in a perfect checkerboard grid anchored by public parks, the city of Savannah was custom-made for the new colony of Georgia like no other colonial city. Established in 1733 along with the last of the thirteen colonies, Savannah is Georgia’s historical heart with beautiful moss-lined trees along streets bordered by equally attractive antebellum and Victorian homes. The founder of the city, James Oglethorpe, also founded the colony of Georgia at the same time. Today’s Savannah contains one of the largest preserved historical districts in the United States and draws millions of visitors. The city has 22 historic squares that dot the unique grid pattern. The first four of these squares were laid-out in the original 1733 survey. Two more were added in 1734 and six more in the 1790s, each effort expanding the corners of the city limits outwards. The final twelve were added in the nineteenth century. Also worth visiting in the Savannah is the trendy riverfront along River Street, which has a number of cotton warehouses that were converted in to shops, candy factories, and restaurants. The gold-domed City Hall overlooks the Central Market, a trendy restored area with shops, restaurants, and antiques. Forsyth Park is a thirty-acre park at the historic district’s south end. The park has a beautiful fountain that is worth a look.

Brasstown Blad. Northern Georgia has the state’s most rugged scenery and it’s here where the Blue Ridge Mountains begins, or end, about two hours north of Atlanta depending upon where you go. The state’s tallest mountain, Brasstown Bald (4,784’), and a number of spectacular waterfalls make this area a must-see for any visitor of the Peach State. Amicalola Falls, in Amicalola Falls State Park, drops over 700 feet in a series of spectacular cascades and Tallulah Gorge is a beautiful defile that is also in a state park of the same name. These are only some of the highlights in this rugged region that borders North Carolina to the north. Most of this region is within the Chattahoochee National Forest although some of the highlights are encapsulated in state parks. Characterized by steep-walled granite peaks, northern Georgia was the scene of the country’s first gold rush at Dahlonega in 1828. There is a museum there that commemorates the event. Nearby Springer Mountain is the start point of the 2,000 plus mile Appalachian Trail which ends in Maine. Brasstown Bald, the state’s highest point, has a paved road that travels just short of the summit. Full facilities and great views from the summit area make this a popular spot and easily accessible by taking the spur of Georgia 180. The mountain is within Brasstown Bald State Park which is, not surprisingly, popular with hikers as well. Closer to the South Carolina state line is Tallulah Gorge State Park. The gorge is about a thousand feet deep in places and through it drops Tallulah Falls over a series of cascades that spill 450 feet.

Dahlonega. Dahlonega was the site of arguably American's first gold rush in 1828 and the town, in the foothills of the of the Blue Ridge, has a gold rush museum dedicated to interpreting and preserving this event's history which is located in the former Lumpkin County Courthouse. The nearby Appalachian Trail is also another draw and the town is also the site of the mountain warfare phase for the US Army Ranger program.

Cumberland Island National Seashore. A beautifully preserved national park on Georgia's Atlantic coast, Cumberland Island preserves a barrier island and that is accessible only by chartered ferry to a road less sea-island wilderness. famous for its nesting turtles, sugar-white sand, one of the best ways to get around and explore is by sea kayak. Access points are from St. Marys.

Warm Springs. A geologic oddity, Warm Springs, located between Columbus and Atalanta in the Piedmont, has been a spa town since the 19th century because of naturally occurring warm mineral waters which well from the earth at 90 degrees Fahrenheit. They are the only warm, or hot, springs east of the Mississippi River. The most famous visitor to take in the therapeutic waters was President Franklin Delano Roosevelt (FDR). His Little White House is now a state historic site.

Augusta. Best known for hosting the golf classic Masters Tournament, Augusta is Georgia's second largest city and sits up river from Savannah having been explored only two years after Georgia's first settled establishment, in 1735, and as such marks the farthest navigable point along the Savannah River. The city has a number of quaint antebellum historic districts which are recognized on the National Register of Historic Places. Augusta also served as the state's capital between 1785 and 1795.

Macon. Smack in the geographic center of the state lies Macon, often overlooked, not because of its central location, but because Atlanta takes in so much. Founded relatively late, in 1822, in comparison to Augusta and Savannah, Macon nonetheless has been inhabited for much longer starting with the Creek Indians who built the Ocmulgee Mounds which now overlook the city's downtown. Macon is the fourth largest city in Georgia (pop. 155,000) and worth the attention that it often does not get. The historic Hay House, a beautifully ornate antebellum Italianate revival home is not to miss. Reconstructed Fort Hawkins, c. 1806, is also a faithful reminder of the city's past, as are the aforementioned Ocmulgee Mounds.

Tennessee: Five Best Places to Visit in the Volunteer State 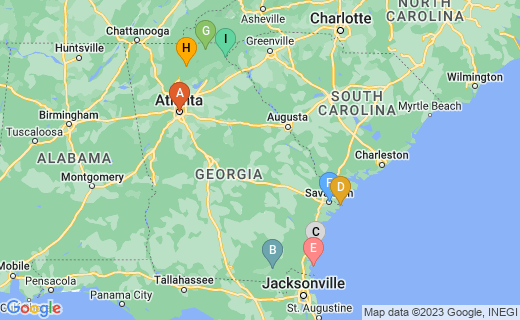