Gesundbrunnen - where is the best place to live in Berlin. Shopping centers, doctor, banks, kita and parks around

1. Transportation: From Gesundbrunnen, you can get connections to anywhere in Berlin and all over the world. You can get a tram, a bus, S-bahn, Regional train, Long distance train and night train. All within walking distance. The airport is also 36 minutes from Gesundbrunnen.

2. Cheap and fresh fruits and vegetables: If you are not a racist and don't mind shopping in Asian shops, you can get fresh fruits, vegetables and meat from shops near Gesundbrunnen.

3. Doctor: If you have children and if you a foreigner, you will love this place. There are lots of pediatricians around. There are also general practitioners as well as specialists around this area. All withing walking distance. It is very difficult to find a place like this in Berlin, where you can find all these Doctors in one place. In addition, if you are really sick, there are two hospitals nearby.

5. Shopping mall: There are only very few shopping malls in Berlin and one of the biggest one is in Gesundbrunnen.

6. Cheap to eat out: Dinning out is relatively cheaper in this region. For instance an normal Indian food costs around €8 Euro here while the same costs €15 in Mitte.

7. Discount shops around: You will find all the major discount shopping centers around this region

8. Churches and Sunday School: There is a Catholic Church in Gesundbrunnen, but the mass is in German. If you like to attend an English mass, the English parish is also nearby (around 20 minutes in train)

9. Post Office and all major banks: In Germany, if you have an account in either Deutsche bank, Commerzbank or Postbank, you can withdraw money from the ATM of any of these banks without paying any fees. There is postbank and Deutsche bank around Gesundbrunnen.

10: Parks and playgrounds: There are lots of parks around, for instance Rose Garden. Berlin wall is near Gesundbrunnen. If you like to see a bunker where Germans hided during the war is also in Gesundbrunnen.

11. Cheaper rents: Nowhere in Berlin, you will get apartments as cheap as near Gesundbrunnen. 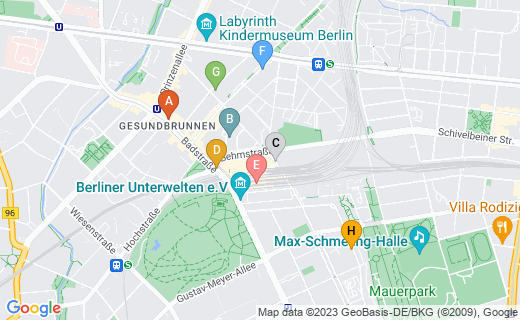