Free Ferry Ride for Everyone in Brisbane

Author Erwin Cabucos resides in Brisbane, Australia and travels regularly to many parts of the world.

Australia's third largest city, Brisbane, is home to many beautiful and inexpensive sights that many locals and tourists can enjoy all year round. Through its European, Aboriginal and Asian heritage, this city prides itself of its unique multicultural gems of which people from the southern states of Victoria and New South Wales can be jealous. Only an hour-and-a-half flight from Sydney and two-hours-and-a-half from Melbourne, Brisbane is certainly worth a visit for a keen traveler willing to explore the country that Captain James Cook entered in 1770.

Being in the north, Brisbane is subtropical that has warm temperature most times of the year. Apart from its often called 'balmy' weather, this city boosts enjoyable tourist spots. And what a great way to start soaking onto the beauty, sights and sounds of Brisbane City than through its free ferry services - a gift from the City Council for locals and tourists alike.

The Brisbane River is once home to a few Aboriginal tribes and a passage for the early English settlers to the inner suburbs of Ipswich, and had been a commercial hub for its first European inhabitants, this River is life to the city. Cruise, cargo and passenger ships and ferries crisscross in its glistening waters. Aboriginal landmarks, gardens, parks and playgrounds enrich its banks. Corporate offices, residential apartments and nice restaurants abound in its piers and surround. The Brisbane River snakes through the city and cruising on this River will give one a spectacular experience of the history, heart and beauty of Queensland's capital.

The City Hopper is an initiative of the Brisbane City Council that provides free ferry transport within the city. It operates seven days a week, stopping at eight terminals, and making a loop for locals and tourists to enjoy. It operates from 6AM until midnight.

"Hop on, it's free," says the operator as you walk in to board this lovely vessel from any of the following piers: Sydney Street (at New Farm), Dockside (near Brisbane East), Holman Street (in Kangaroo Point), Eagle Street Pier (in Brisbane CBD), Thornton Street(near Woolloongabba), Maritime Museum (near Southbank), Southbank 3 (in Southbank) and North Quay (in Brisbane CBD).

The operator often gives you a warm smile as you come on board and you are welcome to look for any vacant seats, including those on the second deck which gives vantage point to witness the magnificent views of the journey. You may stay throughout the loop, passing through sixteen stops or you can hop on and off at any stops within that loop, for free. Just remember locals use the City Hopper, too, so it will be best to catch it during off peak times.

This link directs you to the timetable of the Brisbane City Hopper. 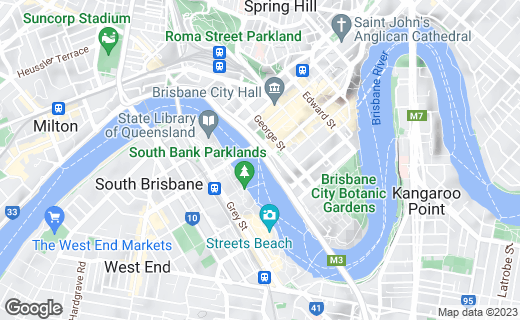 But what really are the attractions you should visit as you hop on and off the stops of the free City Hopper? Here are suggested places from each terminal to which you should consider going:

North Quay. This stop is your gateway to the CBD of Brisbane. As you hop off the Hopper, climb your way through to the easy steps of North Quay until you will be greeted by an awesome sight of the Treasury Casino building that is lit with changing colors at night time. A little further down the lane is the Myers Centre with the Queen Street Mall - the very shopping precinct of Brisbane CBD. The Brisbane Town Hall offers free tours of its history and contemporary activities, and the King George Square in front of the town hall offers free Internet. In fact Internet is free in many parks and hubs within the Brisbane City Council. Check out this portal for a list of parks around Brisbane that offer free WiFi. The Myers Centre also links to a number of buses that go to suburbs, including nearby Logan City Council.

Away from the hustle and bustle of the shops, the Roma Street Parklands is a gem that offers free entry to everyone, fill your hunger for colors through the blooming flowers of this largest inner city garden in Southern Hemisphere. Marvel the Spectacle Garden, the Rainforest and Fern Gully and the plaques of Queensland Greats that have made significant contribution to the world.

South Bank 3. As you walk out of the terminal, you will be greeted by the colorful flowers and gardens, clear waters of The Beach and its lagoons, as well as the aroma of exotic food from restaurants that abound this wonderful precinct. Southbank is the site not to miss in Brisbane. It is virtually the cultural hub of Brisbane city. It is where a number of festivals are held, especially the River Fire during Brisbane Festival in September each year. Southbank hosted the 1988 World Expo and the 2014 G20 World Summit.

Important establishments located in this precinct include:The Brisbane Convention and Exhibition Centre that offers a series of shows and displays all year round; the ABC TV and Radio station that broadcasts throughout the state; The Queensland Performing Arts Centre that puts on great theatrical shows all year round; The Queensland Museum that gives free entry to all visitors; The Queensland Art Gallery and the Gallery of Modern Art where everyone can marvel at the aesthetics of European, African and Asian art; the State Library of Queensland that offers free WiFi for all apart from the series of writers and film festivals and a collection of books and records for the keen and curious minds; the Brisbane Cineplex Cinemas that is popular for their cheap movie sessions ($8.00) and free carparks, and the terminals of mostly all buses and trains as well as ferries that keep Brisbane moving. Within a walking distance from the City Hopper terminal, you can transfer to the trains and buses to discover the gems in each suburb of this melting pot city - not to mention Cleveland, a suburb in the East where an episode of Narnia was filmed

While at Southank, bring a camera to take a few snaps at The trellis of bougainvilleas that mirrors the snaking movement of the Brisbane River alongside it. Have a dip at 'The Beach' where a real lifeguard actually operate everyday until dusk. Have a selfie (is it still a fad) at the Brisbane Sign near to the Brisbane Wheel or simply stroll along the relaxing walkways and witness the calming waters of the River. Meditate at one of the gardens that soothes the busy feet of the every day life. When hungry, taste the Italian, Greek, Turkish, Indian, Chinese, and the good old Aussie fusion tastes at the restaurants that line among the plants and peoples of this frenzy yet stylish precinct.

Eagle Street Pier. This stop is known for its great array of restaurants and bistros and food that really taste good. If you wish to taste modern Australian cuisine, this precinct is a great start. Going to Eagle Street Pier is like entering the city of Brisbane the better way. You will be greeted with the sights and smell of the enticing menus before you will be transported to the towering high rises of the CBD. In this stop you can access most corporate offices and hotels in the CBD, including the Hilton, Marriott, Meriton to name a few. Hidden among the commercial transformation of the city and a short stroll from the pier, is the Catholic precinct of Brisbane. Visit the St Stephen's Cathedral and avail of the free tour offered to know the history of the works of the early Catholic missionaries in Brisbane, as well as local families that helped build this Cathedral. Nestled alongside the tall spires of the Church is the chapel that houses the Statue of Australia's first saint - St Mary of the Cross MacKillop, made up of camphor laurel slabs - emitting unceasing perfume to the delighted souls.

Sydney Street. This City Hopper Terminal is the stop for locals to go home to after a hard day's work in the CBD. This is smack bang in the suburb of New Farm that has perhaps the most number of blooming roses in a single park in Brisbane. The New Farm Park has a strong horticultural element and the colorful roses and Jacarandas are just there to be beheld. Most of all parents can relax while the kids are bewildered by the enchanting design of the New Farm Park Children's Playground. Entry to the park is all free. Sufficient car parks are available most weekdays. One very popular attraction of the Sydney Street pier of the City Hopper is the Riverwalk - a three-and-a-half kilometer floating walkway for walkers and cyclists that connects New Farm and the CBD. This is really pretty during the night when lights of the Story Bridge and the nearby apartments paint the River in a kaleidoscopic way. You will meet people who go fishing and simply feel the balmy weather under the moonlight and stars in one of Australia's peaceful metropolis.