Think of North Wales, and of course, one of the first thing that immediately springs to mind is the areas many narrow gauge railways. Persevered lines such as the Ffestiniog, Welsh Highland, Bala Lake, and the Talyllyn Railway are well known, even to non-railway folk. They have become a major part of the North Wales tourist industry and are a delight to ride on. However, some of the North Wales narrow gauge systems have not been as fortunate to be revived as heritage attraction.

One such system is the unique 2'-4 1/2" gauge Glyn Valley Tramway, which closed in 1935, the same year as another famous narrow gauge system – the Lynton and Barnstable Railway in North Devon.

First, lets take a brief look at the history of the line. The Glyn Valley Tramway. once traversed one of the most picturesque valleys in North Wales. This unique little line ran from Chirk, where the Glyn Valley Tramway. had interchange sidings with the Great Western Railway, a distance of almost nine miles up the Ceiriog valley to the large granite quarry at Hendre. Yet, passengers were only carried part of the way as far as Glyn Ceiriog, the last three miles to Hendre being a purely mineral line.

Quarrying for slate started in the Ceiriog valley at Glyn Ceiriog back in the 1500s, mainly for the local market as it was difficult to transport down the valley, except by means of pack animals. The arrival of the Ellesmere Canal at Chirk in 1799, opened up the market for Ceiriog slate. Although, there was still a six-mile gap between the quarry and the canal. It was not until 1872, after a long drawn out struggle that work eventually began on the construction of a horse drawn tramway to link Glyn Ceiriog and the Ellesmere Canal.

The line actually opened for business to both mineral and goods traffic on Monday, 21st April 1873 and was constructed to the unusual gauge of 2'-4. 1/4", which is, as we know, is exactly half the standard gauge. Initially, the Glyn Valley Tramway. was horse and gravity worked for the first 15 years, which included a type of kamikaze passenger service - as it was customary practice to allow the passenger cars along with the mineral wagons to descend by gravity between Glyn Ceiriog and Pontfaen, a distance of almost six miles The speed down the gradient, which was 1 in 65 and 1 in 79 in places, was regulated by the accompanying brakesman.

As goods traffic increased dramatically as a direct result of the expansion of the local quarries, which were now producing granite and roadstone as well as slate, brought about a change over to steam traction in 1888. Oddly, for some reason the gauge was also changed at this time - being increased by a 1/4" to 2'-4 1/2". One plausible theory, was that the two contractor's locomotives, both borrowed from the near-by 2'-4" gauge Snailbeach Railway, which were used to alter the Glyn Valley Tramway. to steam traction, spread the gauge on the sharp corners of the Glyn Valley Tramway. out to this measurement, which later was adopted by the Glyn Valley Tramway. as their gauge.

As this tramway ran alongside the road for much of the trip up the valley to Glyn Ceiriog. It was more akin to a typical Irish narrow gauge line than anything to be found on the mainland. It was therefore official classed as a tramway, and any form of steam traction used on the Glyn Valley Tramway. had to comply with the regulations of a street tramway. The 1885 Act of Parliament stated that every steam tramway engine was to have:

(1) Such mechanical appliances for preventing it's motive power from operating and bring it and any carriage drawn or propelled by such engine to a stand.

(3) An indicator by means of which it's speed shall be shown.

(4) Suitable fender to push aside obstructions.

(5) A special bell, whistle or other apparatus as a warning.

(6) A seat for the driver so placed in front of such engine as to command the fullest view of the road before him.

(7) A speed not exceeding eight miles per hour.

All these special requirements, just to stop the locomotives from frightening the horses on the adjacent roadway. Two locomotives were ordered from Beyer, Peacock of Gorton Works, Manchester, who at that time experienced in producing steam trams. The two engines costing £1,150 each, arrived in 1888, both having a very distinctive box-like appearance as a result of incorporating the above stipulations, but basically they were just straight forward 0-4-2 side tank engines with side skirts.

The pair were named 'Sir Theodore' & ‘Dennis’ after the chairman and a director of the Glyn Valley Tramway. In 1892, a third engine named ‘Glyn’ arrived to counter the increasing mineral traffic and the introduction of a passenger service. 'Glyn' was slightly improved on the earlier design by increasing the frame length by one foot to give a larger totally enclosed cab and having improved sanding gear. The three engines received no major alterations during their lifetime, apart from the removal in 1921 of the obsolete condensing gear, which never proved totally successful.

Also in 1921, a fourth, rather unusual locomotive was obtained in the form of an ex-World War One American built Baldwin 4-6-0 tank engine dating from 1917. This was purchased from the Ministry of Munitions and was modified from 60 cm to the Glyn Valley Tramway. gauge and Anglicised by Beyer, Peacock. Yet, interestingly she was not fitted with side skirts etc. to comply with 1885 act. The engine was never named, just simply referred to as Baldwin by the Glyn Valley Tramway. staff, and was used almost exclusively on mineral trains due to her rough riding.

A regular passenger service started on Wednesday, 1st April 1891 from Chirk up to Glyn Ceiriog. The Glyn Valley Tramway. carriage stock consisted of a motley selection of four wheeled coaches. Some of the two compartment 1st & 3rd and open thirds were very popular during the summer months. These 'Pneumonia specials', were really just posh open wagons with a primitive roof and hard wooden slatted seats for sixteen passengers.

The fourteen carriages and two oddities all originated from the Midland Railway Carriage and Wagon Co. Ltd. of Shrewsbury. This company also supplied the two 4ton closed vans and two brake vans. Most trains were mixed, and one of the two brake vans was always to be found at the end of every train. As with the Talyllyn railway, tickets from the intermediate stations were sold from these brake vans.

At its peak the Glyn Valley Tramway. had 258 wagons of which 180 were 4 ton three planked drop side granite wagons. Twenty of these were private owner, being the property of the Ceiriog Granite Co. Ltd. The remainder were a selection of 2 ton opens, 2 ton slate, tar wagons and bolster wagons.

The tramway was moderately successful up to the outbreak of W.W.1, but after the war the decline set in. The cartage monopoly of granite the Glyn Valley Tramway. had at the Hendre quarry was broken in 1926 with the construction of a road between the quarry and the valley main road. This allowed motor lorries to take the road Chipping's and tarmac direct to the road resurfacing works. The introduction of a motor bus service in 1932 killed off the passenger service in one go - the last passenger train ran on Thursday, 6th April 1933.

All the locomotives, rolling stock, track and other associated equipment was sold to Davis Bros. of Barmouth for the sum of £2,400. The locomotives were cut at Chirk for scrap, only one of 'Glyn's nameplates survives today. As for the carriages and vans, these were sold off, find use as sheds and chicken houses in the surrounding area, while the mineral wagons were burnt on-site.

All the track was lifted by early 1937, with some of the rail finding its way to the Tallyllyn Railway. By the end of 1937, all of the Glyn Valley Tramway.'s land and property had been sold. Peace and quite once again descended on the Ceiriog Valley.

Ceiriog Valley home of the GVT 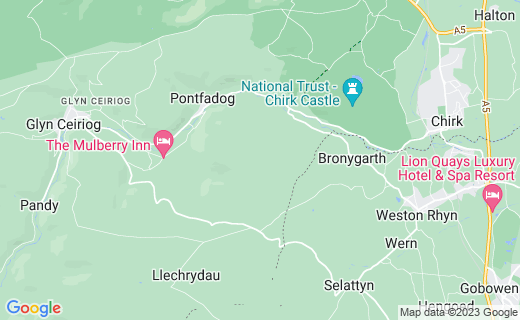 more of my recent Hubs