Educated as a microbiologist, trained as an editor, a quintessential nomad soul grounded to the earth. Loves anything that touches her soul

The park is maintained by the Government of India.

Sprawling an area of around 80 square kilometers, Gorumara National Park lies at the foothills of Eastern Himalaya in the Terai region on the flood plains of the Murti River and Raidak River.

A tributary of Brahmaputra river, Jaldhaka River, flows by the national park.

History of the park

Dooars (meaning “doors”in the local languages) is a gateway that connects Bhutan with India through 18 passages.

How may national parks or wildlife sanctuaries have you visited?

Which Area Preferred for Accommodation and Why

Entry permits for the park's safaris and watchtower visits are available from Lataguri. Therefore for fast and easy access to the park, Lataguri is the most preferable place to stay. You can stay in government lodges, guest houses, or hotels in Lataguri.

Lataguri is a small town, around 45-minute drive from New Mall Junction. The junction is well connected with major railway stations, such as New Jalpaiguri Railway Station and Alipurduar Junction. Trains for almost all parts of India are available from these two stations.

Inhabitants of the Park

The park is primarily known for being the home to a considerably greater one-horned rhinoceros population.

Other inhabitants of the park include Asian elephants, sloth bear, wild boars, mongooses, giant squirrels, different kinds of deer, barking deer; various species of turtles and fishes; and King Cobra and Indian Python. Tigers are seldom spotted in the park.

The park is an interesting place for bird watchers. Different types of birds, such as scarlet minivet, sunbird, Asian paradise flycatchers, Indian hornbill, woodpeckers, pheasants, and peafowls, can be seen.

Apart from being home to many animals, birds, fishes, and reptiles, the park also has villages inside it. Some of these villages are Sarswati, Budhuram, Bichabhanga, and Murti Forest Village.

You can visit Nature Interpretation Centre adjacent to the ticket counters to know more about the park.

Safari in the Park

You can opt for safari in open Gypsy (vehicle) to get deep into the park and spotting animals and birds. The safari is available in four shifts everyday and it takes around 1.5 hours to complete a shift.

Each jeep can carry a maximum of 6 visitors besides the driver and the guide. Nearly 40 people per shift are allowed to visit the park.

Visitors can book an entire Gypsy or hire a Gypsy in a sharing basis.

When Does Gorumara Remain Open for Visitors??

The park is not opened for the visitors round the year. During the monsoon, the park remains closed. You can visit the park in the following months:

The park remains closed from June 15 to September 15 every year due to the monsoon.

Shifts to Visit the Park

The entry timings for four shifts are different for each season.

Based on the entry timings, the ticket counters open.

No safaris or watchtower visits on Thursdays.

Indian visitors should carry both photocopies and original ID proofs of any of these documents: Voter's ID Card, Passport, or Driving License.

What Are the Four Watchtowers of Gorumara?

Jatra Prasad is the park's oldest and most popular watchtower named after the park's favorite pet elephant, Jatra Prasad. He used to work for the forest department and was loved by all.

Rhino Point is another notable watchtower close to Jatra Prasad.

You can find salt reservoirs close to these watchtowers, which increases the probability of spotting animals. Animals come to the reservoirs to lick salts.

Visitors can also get a vista of lush greenery and a rivulet from the towers.

Trees, chirping of birds breaking the silence, cool breeze, various animals are the highlights of the safari.

Other Watchtowers of the Park

We chose the last shift of the Gypsy safari and visited Jatra Prasad Watchtower and Rhino Point. It was a cold day in mid January. Our safari package included a tribal dance program.

During the safari, we spotted peacocks, peahens, a herd of deer, and different birds. Our guide was helping us in locating the probable places where we could find animals. Silence needs to be maintained inside the park, otherwise the animals get frightened and move deep inside the woods.

The visit to Jatra Prasad Watchtower was not disappointing, as we spotted a herd of bisons and a couple of rhinoceros. We could locate the salt reservoirs lying a little away from the watchtower. The scenic view from the tower was also mesmerizing—it was lush green all around and a beautiful rivulet flowing near the watchtower.

We next visited Rhino Point, close to Jatra Prasad, and from there we got a clear view of salt reservoirs.

It was quite cold and the temperature dipped further as we entered the park. We covered ourselves with adequate warm clothes.

The last segment of our session was reserved for a fantastic tribal dance program. We were drove to the ground to watch the tribal dance, where we were offered tea and biscuits. The rhythmic dance, melodious music, and mesmerizing beats of the drums with lush greenery in the backdrop made the session quite interesting.

Preferred Time to Visit the Park

The best time to visit the park is during the winter, between November to March.

The weather is generally pleasant during these months and trees shed leaves. This helps in easy spotting of the animals. However, due to heat and humidity in the summer, animals go deep in the park to find shady areas. This results in difficulty for spotting animals

Gorumara National Park offers an enchanting view of the greenery and houses various tress, plants, animals, birds, fishes, and turtles. Therefore, it is one of the favorite getaways for nature lovers and an interesting spot for botanists and birders.

Maintain silence and keep the forest clean during the safari. Care should be taken that animals are not disturbed or hurt. 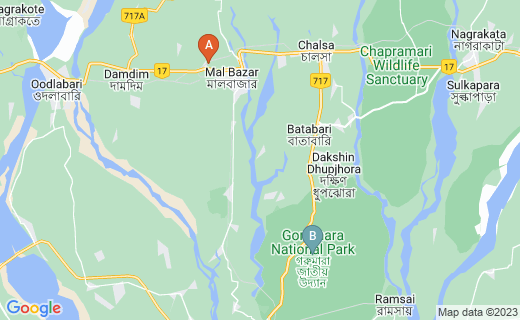