How to go by train from Paris to Sicily, Italy

Amanda is a keen traveller from Australia. She writes about her adventures to provide other travellers with insider knowledge. 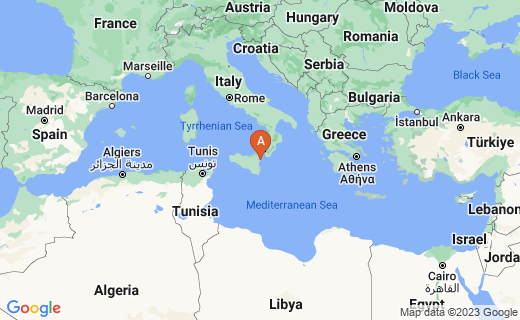 Paris to Sicily in 24 hours

After a wonderful week in Paris it was time to board the Eurail train from Paris to Sicily, on the first leg of our Eurail journey through France, Italy and Germany.

Train is an economical and comfortable way to travel. For 8 days of travel over 2 months we paid about AUD$1000, buying our ticket online beofre we left home through Eurail. Each dya of travelling therefore cost us about AUD$50 per person.

We dragged our cases from our tiny apartment in the Latin quarter to a nearby bus stop on route 24 and arrived at Gare de Lyon, one of the main intercity stations.

At the station, we bought some lunch – coffee, ham and cheese baguettes and a couple of patisseries, one chocolate and banana and the other apple. Thus fortified for the journey we went upstairs to the intercity (grande lignes) platforms and waited for the train for the first leg of our TGV journey, the 14.42 from Paris to Milan.

I found my way through the crowd back to my husband Phillip, who was minding the luggage, and we towed our bags to the front of the train, found our seats and settled in. The seats were spacious (and reclinable). There are only three seats across the carriage, two on one side and one on the other, giving room for a reasonable aisle. Each chair has a robust individual fold-down table and a separate drink holder. There is a power socket for each seat.

Once beyond the suburbs, the scenery opened up to rolling farmland studded with a mixture of very old stone farm buildings, villages and newer housing and highways. The fields are studded with creamy white charolais cattle. We both drifted off to sleep.

Soon after we woke, the scenery became mountainous with thick trees and at the top, sheer, white exposed limestone cliffs on either side. The train approached these and went suddenly into tunnels at the bases of the mountains. In between mountains, the valleys were flat and green. In some places farms had grape vines growing on steep inclines at the foot of the mountains.

The train stopped near the border with Switzerland. Police boarded the train and after some time, escorted four young men from the train.

As we approached Italy, the intercom announcements which had been only in French, became trilingual - French, English and Italian. An announcement told us 'welcome to Italy' as we crossed the border.

Sleeper train from Torino to Naples

We arrived at Susa station in Torino, at about 8.30pm and set off for Porta Nuova station across the city, for our connecting train to Naples. On the footpath a man phoned a taxi for us which whisked us (as only Italian taxi drivers can) through fairly empty dark city streets of Torino to Porta Nuova station.

Once there we saw the train we needed, listed on the electronic board - leaving from platform 6 - and we had an hour before it left so we searched for some dinner. Most outlets we closed - only McDonald's and a local fast food outlet were open so we went for the Italian one and bought toasted Paninis.

We then returned to platform six and found our first class carriage. A conductor found our names on a list, asked for our passports and ushered us aboard. We found our sleeper cabin. Each cabin has odd or even numbers, three to a cabin so 2,4,6 is three bunks in a cabin, usually sleeping two people but which can add a third bunk. So numbered tickets for 2 and 6 are a normal double cabin. Thus our numbers 21 and 25 were in one cabin and alone.

By the time our cases were in the cabin there was just enough room on the floor for us to use the little corner cabinet containing a basin with soap and towels. It took a while to get used to the noises of the train and the movement but we both slept relatively well.

I woke about 4am as we arrived in Rome. I watched the countryside and cities roll by in the pre-dawn gloom. We dressed, packing our most important things into our money belts - cards, passports and cash - to hopefully evade pickpockets – as we had been robbed last time we were in Naples.

Just before we left the train, a conductor knocked on the door and delivered two orange juice drinks and croissants for breakfast.

Naples Station was in morning rush-hour mode. We had just over an hour to wait before our next train to Riposto in Sicily.

I went scouting for yogurt and orange juice and food supplies for the onward journey. The breakfast cafe had no bottles of juice (only soft drinks) and no yogurt (only pastries), so I settled for a bag of biscuits for the journey.

I asked for orange juice and was directed along the counter to where a woman had oranges and a juice machine. She put a couple in and the juice emerged, into a glass. I asked for takeaway but there were no cups.

We watched a busy procession of very well dressed and groomed young women - but no corresponding well-dressed young men – although there were older men in suits – with joggers.

We were on the lookout for potential pickpockets and spotted quite a few young men who seemed to be hanging around, as well as quite a few stereotypical mafia types - portly men in sunglasses carrying brief cases and talking into mobile phones.

Platform numbers were very slow to be displayed. Eventually a crowd gathered by the electronic board and we were directed to platform 13 about 15 minutes before departure of our Trenitalia train.

The train had still not arrived at the platform so we dragged our cases to what would be the front of the train, so as to be as close as possible to carriage 5.

Once the train arrived, the passengers came off and we boarded. There was chaos as people tried to find their seats and places for their luggage as there was no luggage bay.

The seats were padded but not as comfortable as the TGV train seats - there was no 'wing' for resting the head to sleep. We sat opposite each other and beside two couples from the US.

By morning tea time we went searching for coffee and discovered there was no catering at all on the train - no drinks, no food, not even a vending machine.

Fortunately we had water bottles and our packet of biscuits. Other passengers had no food or water so we shared what we had.

The train line curved to the west along the coast and we followed our progress on a large map of Italy.

Here there were small coastal communities where the usual rugged coastal cliffs gave way to small rocky beaches. The water was the typical Mediterranean blue, very clear and pale where it was shallow and quite quickly becoming much deeper blue off the beach.

The train rushed suddenly into tunnels through the coastal mountains, emerging again in rural districts or beach-side townships.

The port city of Messina, Sicily.

Ferry from San Giovanni to Messina

By about 3.30pm we reached Villa san Giovanni and waited while the train was broken in two pieces to cross the Messina Strait on the ferry. We could see Sicily, only a couple of kilometres across the strait.

The northern tip of the island is flat and is crowded with development. The buildings looked like they were sitting at the water's edge. Further south the land rises steeply and the housing development sits along the coast and crawls up the mountains.

The train here is driven onto a huge ferry which has several sets of train lines side by side in the hold.

The early carriages of the train were put on the ferry first, and would continue their journey along the north coast of Sicily to Palmero.

Once on the water, some of our ‘group’ left the train and went up three flights of stairs to the main deck where there was a cafe.

Everyone seemed to be eating deep fried breadcrumbed balls about the size of cricket balls. I asked for two of them. Inside was sticky rice coating a centre of savoury mince with vegetables inside. It was greasy and stodgy but given our hunger, very welcome.

On deck, I went to the front deck and watched as we approached Messina harbour, past the golden statue of the 'BVM' (Blessed Virgin Mary) protecting sailors at sea.

I returned to the carriage which had been disconnected from the air conditioning for an hour was stifling hot and humid.

Eventually we were shunted off the train, linked to an engine and continued the journey south.

Rosa met us on the train platform when we arrived in Riposto – recognising me from my Facebook photo.

She helped us with our luggage to the car as the lifts were not working (they haven’t worked for years). I asked about the lift and she explained simply "This is It-al-y!" as if that explained everything.

Rosa drove us to 184 Corso Italia, let us in and showed us around, how to work the security system, turn on the water heating, lock the doors etc.

The Captain’s Villa is all on the second floor and has three bedrooms, enormous lounge, dining room and kitchen, all furnished in antiques and period furniture with six metre high ceilings, some with frescoes and French doors leading onto verandas over the street or onto the garden.

Downstairs the large garden is partly paved courtyard with gardens and partly grassed.

Once Rosa left us, we lay down and, once revived we unpacked. We were both too exhausted to go out for dinner so we had a cup of tea and a couple of the croissants which Rosa had left for us.

The sounds from the street were quite loud – the slapping of car tyres across the lava-cobbled streets, roaring car engines and motorbikes, horns giving various polite beeps, angry sounds and extended demanding honks.

Was this information useful?

See my other Travel articles on Sicily, mainland Italy, Germany, England and Austria

For more stories on Sicily click on the links below or on the pictures:

Valley of the Temples, Agrigento, Sicily

Treasures of the Greek and Roman city of Syracuse, Sicily

For stories on Italy see:

A huge peace offering - the Colosseum

Marvelling at the Sistine Chapel

If you're planning a trip, check out my articles on how to plan your trip and save money without skimping on the quality of your travel experience.

A great train trek from Paris to Sicily

Great things to see and do in Europe

How to stay connected online while traveling

And then you may feel persuaded to wend your way around Europe:

Taking in the splendour of Bath Abbey

The Palace of Versailles, Paris