Swimming in a volcano and other fun things to do in Guanajuato, Mexico! Once upon a time in Guanajuato, Mexico there were two lovers. Doña Carmen and Don Luis. Carmen and Luis fell in love and wanted to marry but Carmen's father denied the union and forbade Carmen to ever see her boyfriend and would not even allow her to leave her house.

Now Guanajuato is a very narrow city built into a mountain gorge and the streets follow the old rivers and streams that twisted and turned through the valley. Dams were built to hold the water and the old riverbeds became the streets and sidewalks of the city. Some of the streets were so narrow that buildings on either side had balconies that actually touched each other.

Luis befriended the people of the house across from Carmen's balcony and Carmen and he would hold hands above the street and even kiss. The street is called kissing alley to this day. Of course, Carmen's papa found out about the illicit affair and stormed up to the balcony one evening to put a stop to it. He found them holding hands and kissing across the balconies.

He became so enraged that he stabbed Carmen! Luis felt her hand grow cold in his. He could not bear to lose her. But finally, he kissed her cold hand goodbye and never returned to "kissing alley". What became of the father is unknown.

This story and others of the beautiful city of Guanajuato are presented in a wonderful little museum called the Casa de los layendos (House of the stories/legends). If you should ever visit Guanajuato, you must see this museum although it is considered pricey. It is a work of art. I was there in 1981 and still see it in my dreams. The old man that ran the museum may no longer be there. 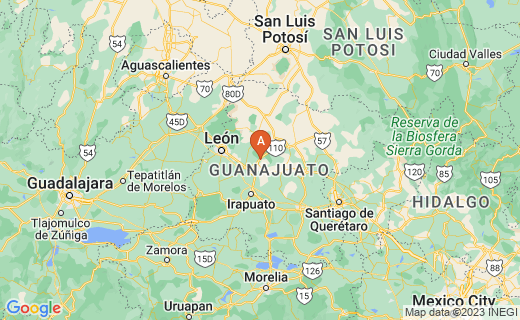 The love of money is the root of all evil and this love was found in abundance in Guanajuato. The area is rich in silver, once rich in gold too. The gold is gone now and the silver is almost mined out, but you can tour the mines. A statue was constructed to honor all of the silver miners. From the statue, you can visit the silver market and gaze out over the narrow streets and the magnificent edificios of this European style city.

One of the big churches there was trimmed in gold leaf. It has since been looted I hear, but it was spectacular! All of the cathedrals in Guanajuato were architectural marvels. There is even an entire Castillan Castle imported and rebuilt and turned into a hotel.

Guanajuato is extremely famous for its mummies. The world's smallest mummy is there, it's a fetus. The woman who supposedly miscarried the infant is mummified with the placenta still attached. The museum is quite modern now and the mummies are behind glass enclosures. At one time it was possible to touch the mummies and some tourists broke off pieces of them for souvenirs. Now that is weird.

Outside of the museum, there are candy shops that sell candies in the shapes of the mummies. They are made of ribbon candy with bright colors. The candies are almost as famous as the mummies! They are called Las Charamuscas de Guanajuato. Buy a dozen!

Miguel de Cervantes, the author of Don Quixote, is the inspiration for the Cervantes festival held every year, usually in October. The theaters put on the plays of Cervantes and there is a Shakespearean feel to the city. The festival hosts events such as opera, theater productions, film showings, art exhibitions, academic conferences and talks, concerts and dance recitals. The performances occur in 70 different venues and performers from all over the world are invited to participate.

Guanajuato, Guanajuato is the capitol of the state and a tourist center for all of Mexico. Tour guides are available to take you to many parts of the city and quite often you can find tours in English. The main language is Spanish, however.

Your hotel can help you with the tours that are available and I would recommend all of them! The city is an artist's delight! Silver in many forms is cheap and plentiful. The markets are amazing. You will not run out of things to do in Guanajuato.

There is no more swimming in the volcano! 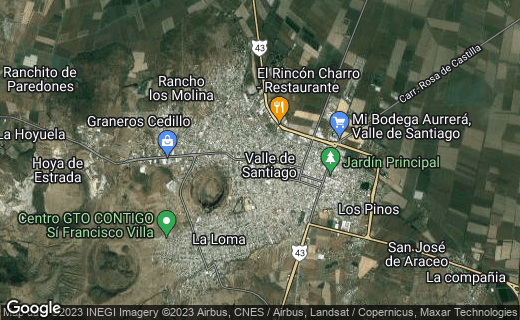 Not far from the central capitol city of

Guanajuato, Gto. there is a small town called Valle de Santiago. This town is definitely worth a visit! There are seven (sisters) volcano craters and one of them used to be the town swimming hole!

In the center of the map, you can see the crater with a small amount of water left inside it. In 1981 when I was there, it was possible to go swimming in the water. Since then, tunnels were drilled into the sides of the volcano and the water has been siphoned off for irrigation.

I remember floating on my back looking up and with the crater rim above me, if felt as though I was in the very center of the world. The water was a jade green and the people were all having a great time. I'm sure I picked up some dreaded parasite while swimming there, but it was worth it. It was the memory of a lifetime.

While visiting this remarkable town, I was also invited to play chess with the National Chess Champion of Mexico! It went like this - for an entrance fee of $100 pesos (I think that's what it cost then), about 25 of the chess playing men of the town were entered in a contest to play the one chess champion.

Each of us had our own chess board and we all simultaneously played the young man as he moved from board to board. This guy was so focused on Chess that I do believe he never noticed that I was the only girl in the room or that I was a red-headed gringa! I also lost the game after only 4 moves.

The Chess champion beat everyone in the room, but I think the total pot was split somehow with the last one to lose. It was the most fun I ever had for $100 pesos (about 20 bux at the exchange rate of the time). Comments - Have you ever traveled to central Mexico?