An afternoon's walk with Alan over the open spaces of North East London, through woodland glades... a drink at the 'Alfred Hitchcock' Hotel

Let's start our walk at the corner of Snaresbrook Road, at 'The Eagle' public house...

The name Whipps Cross refers to the junction of the A104 Lea Bridge Road with the A114 Whipps Cross Road and Wood Street (B160). It straddled the boundary of the erstwhile civil parishes and municipal boroughs of Walthamstow and Leyton. These were brought together as the London Borough of Waltham Forest in 1965, when the area was no longer part of the county of Essex in a boundary re-shuffle.

At 207 feet (63 m) it is the highest point in the borough above sea level. South and west of Whipps Cross the area is largely residential, terraced housing that dates back to the late 19th and early 20th Centuries. South of Whipps Cross Road junction is a large Victorian mansion used by the 68th Signal Squadron of the Inns of Court and City Yeomanry (originally cavalry), part of the Territorial Army (Britain's equivalent of the US National Guard). A war memorial was erected close by, to the 7th Battalion The Essex Regiment (Territorial) and other local units involved in both 20th Century world wars. The inscription on this memorial, that takes the form of a Celtic cross reads:

"We are the dead. To you with failing hands we throw the torch, be yours to hold it high"

The memorial was moved here from Church Hill, Walthamstow when the TA drill hall was closed in the 1950s.

To the south and east of the junction, on the southern edge of Whipps Cross Road was Forest House, over the last century occupied by Whipps Cross Hospital, an NHS teaching establishment and part of the University of London. North and east of Whipps Cross is a part of Epping Forest known alternately as Leyton and Whipps Cross Flats. A large lake and two smaller ones fashioned from gravel pits is known as the Hollow Ponds.

You could start from 'A' on the map below...

This is Leytonstone Underground Station on the Central Line (except it's above ground), from where you turn left out of the station, up the ramp past the mosaic scenes from Alfred Hitchcock's films, and straight on along Church Road to the Leytonstone High Road for bus 277 that will take you straight to the Alfred Hitchcock Hotel (no joke!) opposite Leytonstone Flats and Hollow Ponds with refreshment kiosks and boating in the summer (from Easter to September). Three bus stops and you're there past the Green Man roundabout. 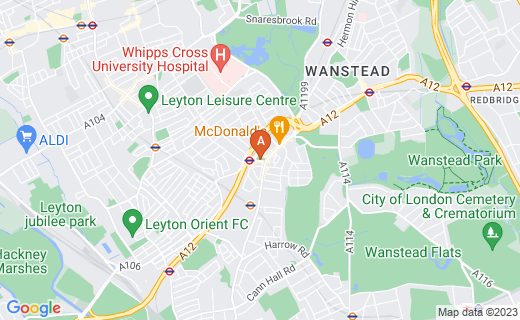 The name Whipps Cross appears in records of the late 14th Century as Phip's Cross, being a wayside memorial erected by a John Phyppe. Later alternatives to the name appear in maps and deeds as Phyppys Cross in 1517, Fypps Chrosse in 1537, Phippes Cross 1572, lastly Whipps Cross in 1636. The consonant change may have issued from the local Essex dialect where 'F' sounds were pronounced as 'W'. The early versions disprove later local legend that supposes a derivation of the name from it being where those found guilty of breaking forest bylaws were whipped.

Forest House Estate south of Whipps Cross Road and west of James Lane has its origins in a lease of land granted by the abbot of Stratford Langthorne Abbey in 1492 (in those days land was owned by Church or King, hence 'real estate'). 'Forrest House' was built by 1568 and rebuilt before 1625. In 1658 George Goring, 1st Earl of Norwich acquired the estate through wedlock. His second son Charles, Lord Goring, who enlarged the estate is interred in Leyton Parish Church. Ownership of Forest House went to Sir Henry Capell, who sold it in 1682 to James Houblon, a wealthy City merchant from a Huguenot family. His sons John and Abraham were born at Forest House. In 1703 the estate was sold to Sir Gilbert Heathcote, the last Lord Mayor to ride at the Lord Mayor's Show. (Later Lord Mayors would ride in the large gold-leaf covered carriage on show in the Museum of London on the Barbican). The estate was sold again, this time to the Bosanquet family in 1743. They held the estate then until 1889, when the West Ham Board of Guardians bought it and established a Workhouse there. In WWI Workhouse Infirmary (hospital) was requisitioned to treat wounded soldiers. The site became Whipps Cross Hospital in 1917, visited that year by King George V and Queen Mary. The mansion house itself would become a ward for male mental patients (possibly stress oriented illnesses due to trench warfare), and was finally demolished in 1964..

In 1905 a swimming pool was dug manually as part of an unemployment relief scheme, locally spoken of as 'The Batho'. The site was close to the junction of Lea Bridge Road and Snaresbrook Road, and became noted for being muddy and unhealthy. In 1923 the borough councils of Leyton and Walthamstow jointly agreed to improvement funds and in May, 1932 a new lido or open air swimming pool was opened by the Lord Mayor of (the City of) London.

Costing £6,000 it was kidney shaped, with a 100 yard (91m) straight section for competitive swimming events. A paved surround and changing rooms were included and the pool was fed from a subterranean spring. The new lido was closed again in September that same year due to a water sample taken, that showed it unfit for bathing in. After further rebuilding, including the sealing of the pool floor with concrete and the installation of a chlorination system, Whipps Cross Lido re-opened in 1937. It was now an extensive pool, 300 feet (91m) long and 130 feet across (40m) with a diving pool 30 feet (9.1 m) deep.

By 1981 attendances had dropped to 20,000 yearly and closure was decided on, taking effect on 4th September, 1982. By December, 1983 the site was levelled and re-forested. Only a section of bar-gated access driveway can still be seen near the traffic lights that control the road junction.

The Hollow Pond, dug in WWII to fill sandbags for defences against air raids

Snaresbrook, an area of north-east London lies largely in the London Borough of Redbridge that borders the London Borough of Waltham Forest on its south-west side. The whole area fell under the County of Essex until 1965. The name stems from 'Sayers Brook' that flows into the River Roding, that in turn runs around the edge of Wanstead near the Redbridge Roundabout and past Wansead Park (and past Wanstead Golf Course via Ilford to the Thames near Barking).

Snaresbrook borders on South Woodford on its northern side, the southern edge of Epping Forest, Upper Leytonstone and Walthamstow on its south-western edge. Wanstead lies to the immediate east. Snaresbrook Ward in the London Borough of Redbridge extends over much of Wanstead High Street. The ward forms part of the 2007 boundary re-designation and is within the (UK) Parliamentary Constituency of Leyton and Wanstead. The western-most part of Snaresbrook is beyond the ward boundary as part of Walthamstow's Parliamentary Constituency.

A prominent architectural feature that faces the road junction of Hollybush Hill (A1199) with Snaresbrook Road is a white-fronted Georgian public house named 'The Eagle' that fronts a Travelodge hotel (hidden from the road by trees). Well worth a visit for the variety of drinks and, as part of the Chef & Brewer chain, offers a handsome menu. The restaurant understandably tends to be busy at weekends.

Snaresbrook Primary School and Forest School (private, fee-paying) are the two educational establishments in the area, the latter was used in the filming of 'Never Let Me Go', doubling for the Hailsham (Sussex) assembly sequences.

The director of 'Psycho', 'The Birds', 'Vertigo' and a score of other suspense thriller movies, Alfred Hitchcock lived in one of the terraced houses fronting on Whipps Cross Road in his later childhood. I am informed he used to get about a lot in the area, playing pranks on people as far afield as Wanstead Park (where there was also a rowing boat hire business on the Perch Pond).

At Leytonstone Underground (Central Line) station there are mosaics on the exit walls of scenes from his films. There are mementoes of his films around the bar room of the 'Alfred Hitchcock Hotel', from film posters to magazine and newspaper articles. Browse while you drink, or watch one of the matches (either type of football, or cricket on the large screen at the front of the bar (street side).

The building where he lived as a boy, and the adjacent three houses, are part of 'The Alfred Hitchcock Hotel' with its rustic bar and open fireplace, large windows overlooking Leyton Flatts and sizeable car park (another at the rear). A fair variety of drinks is available here, as well as choice yet nicely priced meals in its restaurant that overlooks the rear car park. Rooms are competitively priced and afford good views across the open ground and woodland opposite.

The owners being a South African family, at the time I first wrote this page had the bunting out n force for the World Cup Rugby, (some matches being played at the nearby stadium in Stratford West Ham Football Club moved into a couple of years after the Olympics took place from their Boleyn* ground in East Ham, a few miles south of here)

*The Boleyn, or Bullen family owned land around the east side of London, at the time mostly village and open farmland or forest once owned by Earl Harold Godwinson

It was opened in 1843 as an Infant Orphan Asylum by King Leopold I of Belgium. It later became the Royal Wanstead School. The architectural design was undertaken in a partnership between Sir George Gilbert Scott and William Bonython Moffatt. Part of the Mock Tudor front can be seen over the trees that border Eagle Pond, with its frail looking turrets that poke up on either wing of this grey stone building.