A Taste Of Tunisia

The resort of Hammamet is located on the coast of Tunisia, the most northern country on the African continent; it is an increasingly popular choice of holiday destination for tourists from all over Europe due to its proximity and accessibility. Fights are frequent and inexpensive from most European countries and are of very short duration. At less than three hours' flying time from the UK, it is possible to experience a totally different culture for less than the cost of a typical family package holiday to Spain.

Known as North Africa’s answer to St. Tropez, because of it's fashionable reputation with the upmarket set, Hammamet is the longest established resort in Tunisia and offers the visitor a wide range of activities for a fun-packed family holiday. It is popular with young couples and also the retired who are seeking long-term winter breaks. The calm, clear waters of the Mediterranean and temperate climate make it an ideal year-round destination although sun worshippers are better suited to the usual may to October season. For those in seach of ethnic experiences and bohemian lifestyle, Hammamet ticks all the boxes.

Hammamet is only a short forty minute transfer from the recently built Enfidha airport by road and is the most northern resort in comparison to Sousse and Port el Kantaoui. There is another airport at Monastir, one and a half hours further south.

A Mix Of Old And New

Of the main resorts in Tunisia, Hammamet is perhaps the most picturesque. It is named ‘The Garden Resort.’ The area is particularly known for the jasmine flower which lends its name to the more modern part of the town. This is Yasmine Hammamet where many newly built exclusive hotels, exotic boutiques and an opulent marina are to be found. The new shopping malls with their unique architecture and marble concourses appeal to those visitors who prefer set prices and don't wish to waste precious time haggling.

Alternatively, the old medina area still has a timeless charm. At sunset, there is every opportunity to take wonderful shots of the sun setting over the mountains and the Gulf of Hammamet. Here you can relax in a coffee bar with the apple-scented aroma from Hubbly Bubbly pipes wafting on the air. There is a hop-on-hop-off ‘Noddy’ train and everything is fairly central for the visitor on foot. Taxis are inexpensive, reliable and plentiful.

Inside the Medina itself - the old walled part of the town – the visitor will find plenty souvenirs at affordable prices: spices, leather goods, perfumes, brassware and jewellery are particularly good value. You can even buy magic carpets - well not quite, but if correctly addressed when purchased they will find their own way to your country of residence, thus saving you the bother of carrying them!

Hammamet takes its name from the ‘Hamm am’ meaning a Turkish bath and is built on a Roman site of antiquity some of which remains to this day. At Pupput the visitor can see almost complete mosaics and the remains of Roman villas. No visitor with an interest in archaeology will want to miss the site of ancient Carthage which can easily be visited on a day trip from Hammamet. There is also the Bardo museum in Tunis itself which houses the finest collection of antiquities outside of Egypt. Further to the south are the remarkably intact ruins of Ej Djem which is similar to the Colosseum in Rome.

Hammamet’s hotels tend to be of an excellent quality but relatively inexpensive by European standards. Recommended hotels are the Bel Azur which is 3 star, the Sol Azur, 4 star and The Royal Azur, 5 star. These three neighbouring hotels owned by the Les Orangers group are set in a marvellous location and offer the discerning tourist top class accommodation. Their facilities are interchangeable whichever one you choose to stay at.These hotels occupy a prestigious position and command a fine view over one of the best stretches of sands in the entire resort.

Hotel meals are generally self-service and there is a wide choice available to cater for all tastes although vegetarians may find the choice rather limited. As a break from hotel food, why not eat at one of the many cafes that have outside seating? In the cool of the evening, you can have a healthy ‘Salad Tunisienne’ consisting of olives, tomatoes, lettuce and Tuna. There is a wealth of ice cream parlours, snack bars and tempting bakeries with frontages on most roads so the visitor to Hammamet will never be at a loss to find somewhere suitable to eat. An understanding of French is useful when eating out as menus are generally in this language although most Tunisians speak excellent English and from an early age are familiar with the majority of European languages due to the influx of tourists.

Ruins At Carthage With Mediterranean Backdrop

The impressive beaches are clean, well-maintained and easily match those of the Caribbean. The soft, white sand stretches as far as the eye can see. The beaches shelve gently into the inviting Mediterranean offering a safe haven for bathing and water sports along the North African coastline. It is possible to walk for miles in either direction with hardly any rocky outcrops or cliffs to halt your progress - or take a camel ride instead when the sand is too hot to walk upon!

Incorrigible sun-worshippers will find it hard to tear themselves away from the sheer hedonism of Hammamet, but for the more adventurous it is possible to take a memorable two day or four-day safari into the Sahara Desert for a taste of the real Tunisia. You can dress up as Lawrence of Arabia and have your photo taken on a camel but if discovering a real oasis is too adventurous then there are many and varied trips more local to Hammamet.

Sun-Soaked Sands Stretch For Miles Along the Mediterranean Shoreline 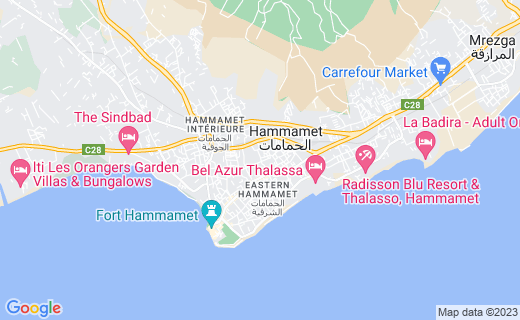 After reading this article, would you like to visit Tunisia?