Though you may never have heard the classic rock song of that name by British singer-songwriter Ian Hunter, trust me, ‘Cleveland Rocks!’. (Perhaps you remember it instead as the opening theme song of the decade-long ABC sitcom ‘The Drew Carey Show’?)

When the founders of The Rock ‘n Roll Hall of Fame and Museum were contemplating where to locate the fledgling facility, Cleveland rock fans — by way of a petition and a 600,000-fan poll tally — beat out their counterparts in New York, L.A., Memphis and Nashville to win the Hall and Museum. (The City of Cleveland also awarded $65 million in public funding to create the facility's iconic structure.) So it is probably fitting that the first Hard Rock Café in Ohio should have been located in downtown Cleveland.

Occupying a prime corner location within the massive Tower City Center complex adjacent to Public Square, the Hard Rock Café had a presence overlooking the retail and food areas of The Avenue at Tower City Center's grand public concourse, but also had an exterior entrance from and view to Huron Road, high above the bends of the Cuyahoga River winding through Cleveland's 'Flats' below. Marking the location of restaurant, much like a Google-map pin, was the café’s iconic red guitar, perched along the high-flying bridge-like edge of Huron Road, and rotating lazily in the occasional Cleveland sunshine.

Life and Relocation of the Cafe

Cleveland’s Hard Rock Café was established in 1998, situated in a prime tenancy within the contemporary office/retail built and partially renovated during the 1980s. The restaurant's opening came on the heels of the last great expansion and updating of Tower City Center and its environs. (The original Union Terminal and the Terminal Tower that is central to the complex were both originally constructed in the 1930s, during railroad's heyday. Cleveland's light rail transit system still employs the complex's lowest levels as its primary transportation hub.) New life was injected into the area once again, as Cleveland saw development of its first downtown casino, The Jack.

Like its more than 185 counterparts in other great cities around the globe — from Aruba to Wales, Bangkok to Barcelona, Nagoya to Mumbai — the Cleveland Hard Rock Café offered the same great rock n’ roll experience in drinks, dining, memorabilia and merchandise.

However, as casinos came to Ohio, Cleveland's Hard Rock Cafe was relocated from its Tower City Center location to Northfield Park, a premier harness racing (trotter) horse track in Northfield, Ohio, a dozen or so miles southeast of Cleveland in suburbia. That redeveloped track and expanded facility took on the new moniker of Hard Rock Rocksino Northfield Park, and has since been acquired by MGM and renamed yet again: MGM Northfield Park. 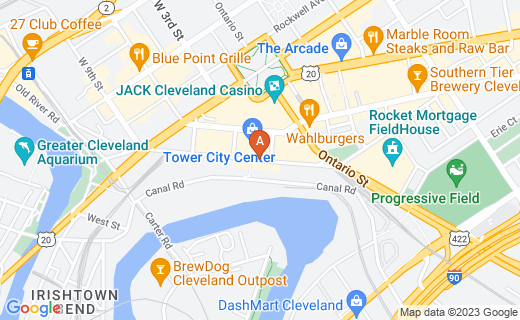 The big red guitar is easily visible from West Huron Road or from Ontario Street entering the city from the expressways to the south.

For many locals, dining at Cleveland's Hard Rock Café usually preceded or followed a Cleveland Indians' baseball game at nearby Jacobs Field. For others, it was often in tandem with can browsing and shopping The Avenue at Tower City and its more than 100 retail and entertainment establishments. These included The Tower City Cinemas, a twelve-screen complex, a multi venue Food Court, and the adjacent Tower City Amphitheater. Lunches at the Hard Rock Café were also heavily populated by office workers from the Tower City Center's multiple office and hotel facilities, and surrounding office structures in the downtown core.

Since the acquisition of the Tower City Center complex by regional developer Dan Gilbert current owner of the Cleveland Cavaliers — and holder of a substantial stake in the nearby Quicken Loans Arena (the 'Q') — plans continue to be formulated for a complete recasting of the vast volumes of the Tower City complex, including the former Hard Rock Cafe of Cleveland.