4 Haunted Pubs and Inns in Cornwall

Cornwall - The Most Haunted County In the British Isles

Cornwall is reputedly the most haunted county in the British Isles. With its long history of pirates, ghosts, pixies and other legends, Cornwall's always had a mystical feel about it along with plenty of haunted pubs and inns.

This page will help you to find out more about the haunted pubs in Cornwall, so you can either visit them yourself while on holiday or if you're local, or even enjoy the stories from wherever you are in the world.

Cornwall is truly a unique place, full of hidden treasures, stories of smugglers, a fascinating history - and now is a tourist hotspot with glorious sandy beaches backed by steep cliffs, or small harbours with fishing villages huddled around them.

The Kings Head dates back to 1623 and has had various names in its past, The Indian Queen and The London Inn are two of them. The Kings Head was a staging post for coaches and a meeting place for Cavaliers and Roundheads.

The Kings Arms changed hands in February 2009, when it was sold at auction, a freehold property.

Peggy Bray was a former landlady of the Kings Head pub at Altarnun. Her ghost is most often heard walking in the corridor on the first floor, it's thought she walks around the building to make sure it's all being run correctly. Some visitors have said they can feel a chill near the doorway halfway along the passageway.

Can I Stay the Night?:

Yes, the Kings Head has rooms to let.

One of the ghosts at the Jamaica Inn at Bolventor on Bodmin Moor has been seen wandering around the inside of the building and walking through walls. A ghostly figure has also been seen sitting on the wall, before disappearing. This might be the same ghost.

The ghost at Jamaica Inn is believed to be that of an old-time seaman.

Jamaica Inn was built in 1750, on the edge of the A30 which runs right through the middle of Cornwall. The Inn is high on Bodmin Moor and was a coaching inn, famed for being used as a base by smugglers. This was the Inn that was immortalised in the Daphne DuMaurier famous novel by the same name.

Until a few years ago, there was a marvellous museum of curiosities and stuffed animals that you could see while at the Jamaica Inn, but these were all sold individually by auction in 2004. The stuffed animals were posed and dressed like little people, going about daily activities - there was one of a schoolroom full of baby squirrels and another that was a courtroom. These stuffed animal scenes are called diaramas. The auction of was very high profile and covered extensively in the national press at the time.

There are reputedly many ghosts at Jamaica Inn, one female ghost at Jamaica Inn is a mother with her child, there is a young murdered smuggler and a pirate complete with a tri-cornered pirate hat. Some nights, the sound of horses hooves and metal wheels can be heard on the cobbles in the courtyard.

In April 2016 the BBC series Hairy Bikers' Pubs that Built Britain showed Dave and Si visiting Jamaica Inn, which gives good internal footage for those interested in seeing inside!

The Three Pilchards in Polperro was the first pub to be built there and was allegedly named after the three pilchard curers that would regularly bring their fish into the pub for tasting.

One of the hauntings is believed to be of a family who lived there in the 1800s. A previous owner, Ennis Jones, of The Three Pilchards reported that she regularly saw the ghosts and The Cornish Times, a local newspaper, published an article about the ghosts. She recounted how she saw a woman in the upstairs part of the pub when she was a girl and, after moving back there with her husband, Alan Jones, he also saw the ghosts and heard noises.

Andy Jones undertook some research, which lead him to some old records about a family that had lived there from 1856-1870. The father had regularly beaten his wife and one of their children would try to stop him. It is the noise from one of these scuffles that is sometimes heard in the pub.

But it's not just the landlords that have stories, several regulars have also seen the ghosts. One claims to have seen the shape of a woman in the back yard milking a cow.

From time to time, a strong smell of violets can be smelt in the pub, for no apparent reason; the smell then vanishes just as quickly as it appeared.

The Three Pilchards is a dog friendly pub and has a log fire in the winter. Open all year round

As with old buildings, there are many ghosts associated with the Inn, some are seen in the public areas and some in the private accommodation.

The Crumplehorn Inn has everything from something that can be seen moving out of the corner of your eye, only to disappear when you turn round, to doors opening and somebody in one of the bedrooms with their hand on their head.

Previous owners have also heard voices and whispers at night from the loft above them - except the loft has no access. The male voice is believed to be from a soldier from the First World War who had deserted and was hiding in the loft, the female was his lover.

The Crumplehorn Inn has many ghosts and has been investigated by several ghost hunting groups over the years, including on investigation in November 2004 when the group heard a cup moving in the kitchen, returned to a room to find a light had been turned off and they captured a strange shadow on their video.

The Ghost of Willy Willcox

While you're in Polperro, why not pop down to the beach and look at the haunted cave of Willy Willcox...... ask about him in the pub. 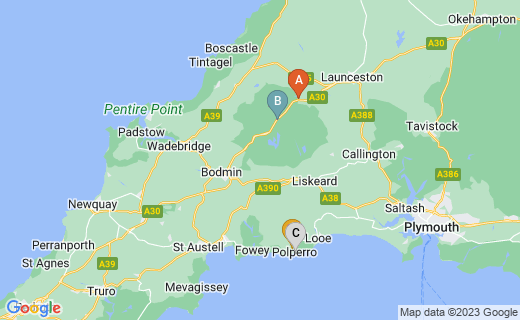 Other Haunted Places in Cornwall: