Where Past and Present Meet

From its colorful past to its present day status as a resort town, Ainsworth, in "Kootenay Country," British Columbia, bears distinction as being the oldest village on Kootenay Lake.

A remote location, transportation in and out only by way of pack horse or sternwheeler, plummeting silver prices and a devastating fire should have spelled the death knell for the small settlement, but Ainsworth did not meet the same fate as did other mining towns in the West Kootenay region. While places such as Cody, Sandon, Three Forks, and Retallack fizzled out and became ghost towns, Ainsworth hung on.

Today, visitors can experience how the past steps on the heels of the present, for the townsite is a blend of buildings, both old and new. A small graveyard just steps away in the forest bears weathered testimony of all those who came before.

Graveyard in the Forest

Ainsworth's past has shaped its present

When a steamboat captain by the name of George Ainsworth heard tell of silver-lead ore in the West Kootenay region, he traveled northward from the U.S. In the early 1880s, he received a land grant of 166 acres in an area known as Hot Springs Camp. By 1881-1883, the area boasted saloons, 2 general stores, 4 hotels, a post office, many homes, and a townsite was staked out.

By 1884, prospecting activity was at an all-time high and ground had been staked from the lakeshore to the summits. Mines such as as Krao, Keyline, and Gallager were in full-swing. At one point, one million tons of ore waited on the dock for shipment. {1}

Optimism knew no bounds. The local paper, Hot Spring News, reported: "John A. Retallack, late owner of the Kaslo-Slocan Railway, is firm in the belief that the future of Ainsworth is as bright as a new-minted 20-dollar piece." {2}

Buildings sprang up quickly and Ainsworth, B.C. became a lively place with hotels, brothels and saloons serving the public, where miners worked hard and played hard.

"John A. Retallack, late owner of the Kaslo-Slocan Railway, is firm in the belief that the future of Ainsworth is as bright as a new-minted 20-dollar piece."

Ainsworth was only accessible by pack horse and served by the sternwheelers SS Nelson and later, SS City of Ainsworth. These vessels traveled up and down Kootenay Lake, providing transportation to and from the isolated community, bringing in food and supplies, plus an influx of those seeking their fortunes or a new beginning.

It was a hustling and bustling community.

The boom did not last. The Payne claim at nearby Sandon in 1891 impacted Ainsworth and, after 1893, Ainsworth fell into a decline. A few short years later, in 1896, a fire razed the town, destroying thirteen hotels and most of the buildings.

The village struggled through the Great Depression and by the 1950s mining was once again in the forefront--until silver prices dropped.

For every step forward, there were two steps back, but...

In the beginning, the Lower Kutenai First Nations people came to the area to enjoy the healing powers of the mineral waters. They would set up camp near to the lake and would go hunting, fishing, and huckleberry picking. These yearly trips continued until the 1900s.

While in the early years, prospectors scoured the hills around Ainsworth looking to make their fortunes, in the end, it was the natural mineral springs that would play a pivotal role in the survival of Ainsworth and set the stage for its future. The waters were an abundant geothermal resource and proved to be the real "mother lode."

Ainsworth, it turned out, had more going for it than silver ore.

Miners had tried to create a tunnel but had abandoned it upon discovering hot water. Throughout this "hot zone," in the hillsides and below the pool, geothermally-heated water bubbled to the surface and wherever it did, it left colorful mineral deposits.

It became apparent that Ainsworth had a natural resource that might be worth far more than the what could have been extracted from the mines. Subsequent decades saw further development around what was known as hot springs pool and the tunnel was developed into a cave that went back into the mountain 70 feet and circled around. Hot water flowed into it and soon left mineral deposits that coated everything they came in contact with.

The following decades saw emergence of a modern resort offering more pools, plus lodgings and fine dining, and all with stupendous views overlooking Kootenay Lake and the towering mountains. This endeavor preserved Ainsworth and prevented it from fading into obscurity like so many of the abandoned mining towns in the region.

The hotsprings turned out to be the real "mother lode" and has put Ainsworth on the world map.

Have You Visited Ainsworth? 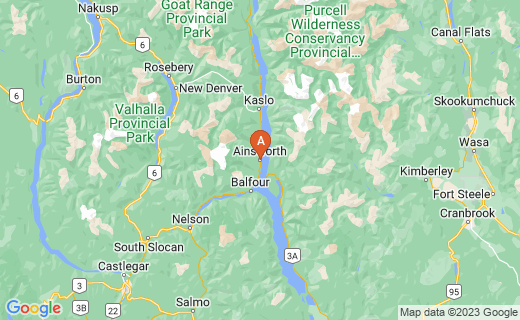 The Fletcher family has established the J.B. Fletcher Restoration Society ( formally dedicated in 1988) to preserve the region's heritage. Visitors can learn more about the history of Ainsworth and find an assortment of local crafts, such as soap, pottery, jewellery, and cards. In tandem with that, a Facebook page, J. B. Fletcher Historical Store and Crafts offers a wealth of historical data and photos released from relevant archives.

Some of the Old Buildings Remain 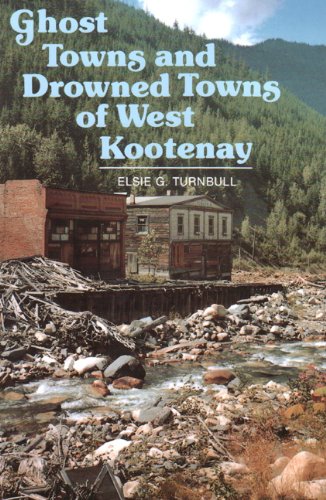 Something old, something new

Ainsworth, B.C., first town in the West Kootenays, has survived and earned its place on the map. Today the quaint village is a favorite spot for local and attracts visitors from around the world. The area is a get-away for camping, fishing, swimming, browsing the shops, hiking the trails through the forest, and for experiencing one of British Columbia's premiere commercial hot springs.