Chris enjoys photographing the places he visits. He shares these photos as travel articles and also mixes them with creative writing.

Eastern State Penitentiary, a Great Place to Visit in Philadelphia

Of all the historic places to visit in the city of Philadelphia, it might seem strange that I am suggesting a prison. A tour of historic Eastern State Penitentiary is just that awesome. I'm working temporarily in Philadelphia and have lots of time to get around and see the sites in this city that features Independence Hall, The Liberty Bell, Congress Hall, Carpenters Hall and world class museum after world class museum. When I first heard about Eastern State Penitentiary and saw photos, I knew I had to grab my camera and go.

If you are visiting Philadelphia in the fall, you might have the opportunity to go over to the prison for their annual haunted house. For Halloween 2013, Forbes rated Philadelphia's "Terror Behind the Walls" at Eastern State Penitentiary in its top ten haunted house attractions in the country. The event runs from late September through early November. Check the website for specific dates. Prices are much better online than at the door.

Eastern State Penitentiary is located in central Philadelphia, Pennsylvania on Fairmount Street between 22nd Street and Corinthian Avenue in the Fairmount section. When it was originally built in 1829, the prison was outside the city, surrounded by farm land. Today Eastern State Penitentiary is in the very heart of the fifth largest urban agglomeration in the United States.

"Terror Behind the Walls" Haunted House

A massive haunted house in a real prison! Called “One of America’s Scariest Halloween Attractions” by The Travel Channel and consistently ranked among the top 10 haunted attractions in the country. All proceeds benefit historic preservation at this National Historic Landmark.

The founders of Eastern State Penitentiary were Enlightenment thinkers. They were convinced that the conventional method of locking criminals up in common holding pens and punishing them for their unlawful behavior was the wrong way of handling the problem. They believed that the criminal could be reformed, could be made sorry for his crimes by means of isolating him with only the memory of his misconduct to keep him company.

One of the Living, 1985 with Tina Turner (Music Video)

Return to Paradise, 1998 with Vince Vaughn and Anne Heche (Film)

Transformers: Revenge of the Fallen, 2009 with Shia LaBeouf and Megan Fox. (Film) 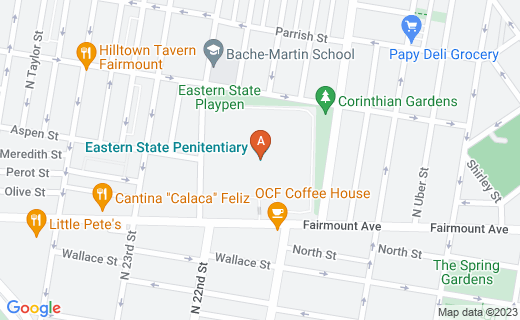 Tips for Your Visit to Eastern State Penitentiary

Opposing Viewpoints on the Job Eastern State Penitentiary Was Doing

From a report by two French officials to their own government. “Thrown into solitude... [the prisoner] reflects. Placed alone, in view of his crime, he learns to hate it; and if his soul be not yet surfeited with crime, and thus have lost all taste for any thing better, it is in solitude, where remorse will come to assail him.... Can there be a combination more powerful for reformation than that of a prison which hands over the prisoner to all the trials of solitude, leads him through reflection to remorse, through religion to hope; makes him industrious by the burden of idleness.." Alexis de Tocqueville and Gustave de Beaumont

Charles Dickens, 1842: In its intention I am well convinced that it is kind, humane, and meant for reformation; but I am persuaded that those who designed this system of Prison Discipline, and those benevolent gentleman who carry it into execution, do not know what it is that they are doing....I hold this slow and daily tampering with the mysteries of the brain to be immeasurably worse than any torture of the body; and because its ghastly signs and tokens are not so palpable to the eye,... and it extorts few cries that human ears can hear; therefore I the more denounce it, as a secret punishment in which slumbering humanity is not roused up to stay.

Video on the Willie Sutton Tunnel Escape of 1945

Prisoners on the Loose

In the spring of 1944, cellmates Clarence Klinedinst and William Russell began work on a tunnel originating in their cell. Klinedinst was a plasterer and was working for the prison to repair damaged walls in one of the cells. The two men actually lived in the cell being repaired.

The two prisoners made a small, hidden panel in the wall where they were working and spent the next year constructing a tunnel behind it. They dug down fifteen feet, then horizontally for 97 feet and up 15 feet on the outside of the wall. During the early morning hours of April 3, 1945, Clarence Klinedinst broke through the ground at the corner of 22nd Street and Fairmount Avenue.

He returned to the cell to get William Russell who convinced Klinedinst to wait till later in the morning. They waited and were joined by ten other inmates who were on their way to breakfast. One of these was famous bank robber “Slick” Willie Sutton.

The twelve men crawled through the tunnel, crossing an underground stream and surfaced covered with mud. They scattered into the surrounding neighborhood, but most were caught that same day. Willie Sutton was apprehended fifteen minutes and two blocks from the prison.

One escapee was out for eight days but returned to East State Penitentiary on the morning of April 11 and knocked on the gate. He wanted back in because he was hungry. Two others were arrested in New York City three months later. “Slick” Willie Sutton took credit for being in charge of the design and construction of the tunnel, while Clarence Klinedinst remained silent on the subject.

Throughout the one hundred forty-two year history of Eastern State Penitentiary, more than one hundred prisoners managed to escape.

The first person to escape was William Hamilton who, in 1832, managed to descend the wall from the warden’s quarters.

Six inmates scaled the wall in 1923. One of the six, Leo Callahan, was never recaptured.

High Points of the History of Eastern State Penitentiary

A Great Place to Visit in Philadelphia

Whether you are interested in architecture, the history of prisons, or just want a good scare, A tour of Eastern State Penitentiary is a very satisfying and educational experience.