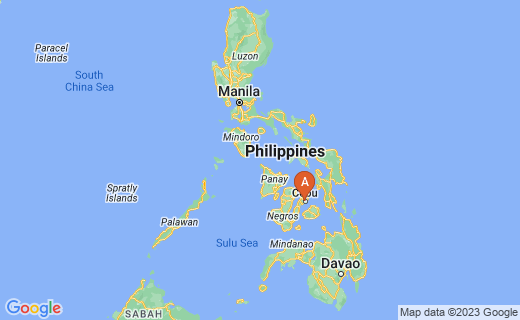 Cebu is one of the many islands of the Philippines. If you look at a map of the country, you'd find this long narrow island smack in the middle of the archipelago. Majority of its land area and population is in a long narrow major island, surrounded by more than 100 smaller islands, most notable of which are the Mactan, Olango, Camotes, Batayan and Malapascua islands.

Even though the country's capital is Manila in NCR, Cebu is considered to be one of the most industrialized and developed province in the Philippines. Cebu City, the provincial capital, boasts numerous local and international businesses. Its busy port receives millions of tourists, investors and trade per year, making it one of the most important cities in the Visayas region. It is not surprising then when it was hailed as the "The Queen City of the South".

Cebu is not only famous for its economic value. The province is also rich in history, culture and natural resources. Anyone visiting the country must not miss out on the beautiful and scenic spots the island has to offer. Below are the links to these destinations, depending on what interests you most:

Any young Filipino can narrate to you the story of the country's very first national hero. Then again, you could probably read it for yourself in any Philippine History textbook. Almost three years after he departed from the port of Seville, Andalusia in an expedition to circumnavigate the globe, Ferdinand Magellan arrived in the Philippines. He was successful in establishing diplomatic ties with Rajah Humabon of Cebu, perfoming the first baptism in the country. He made plans to spread Christianity to the nearby island of Mactan. But the island's chieftain, Datu Lapu-Lapu, did not accept his proposal. On April 27, 1521, Magellan sailed to Mactan with a small attack force. The natives, equipped with their bamboo spears and bolos , gained home-court advantage on the shallow rocky shore that was the battlefield. Magellan was mortally wounded, and Lapu-lapu was hailed to be the first Filipino to fight against foreign sovereignty.

This historic battle is reenacted annually during the Kadaugan sa Mactan Festival. In this week-long celebration, the local government stages a play depicting the fight between the natives and the Spaniards at the exact shore where the battle was fought, a few meters behind the monument. Famous celebrities take the roles of Lapu-lapu and Magellan. The event is a must-see for any tourist who visits Cebu in the month of April.

In front of Lapu-Lapu monument, right across the street, is the lesser known Magellan's Marker, which stood on the exact spot where Ferdinand Magellan supposedly died.

Majority of the Philippines' population are Christians. The country's religious history can be traced back to Zugbu (currently called Cebu). Ferdinand Magellan, after landing on the island and establishing peace with the natives, planted the first seeds of Christianity. The first Catholic Mass was celebrated here on April 14, 1512, where Rajah Humabon and Queen Juana and about 400 followers, were baptized by Fr. Pedro Valderema. At present, what remains of the original cross erected by Magellan, is encased in a hollow tindalo wood and was placed inside a kiosk to further safeguard it from people who believe chips off the cross have miraculous powers.

The scenes painted on the roof of the kiosk containing Magellan's cross shows the arrival of Magellan in Cebu, the first mass and baptism, and his planting of the original cross on the shore.

Almost 44 years after Ferdinand Magellan died and surviving members of his crew left the Philippines, Miguel Lopez De Legazpi arrived in the shores of Cebu. They built Fort San Pedro to repel Muslim raiders. Throughout the country's history it has served in a myriad of purposes: the hub of Spanish settlement, the American Warwick Barracks, a school for local Cebuanos, fortification for Japanese soldiers during World War II, local army camp during the battle for liberation. In recent times it housed the Cebu City Zoo, the offices of Department of Tourism and the Philippine Tourism Authority. At present, it is under the PTA and houses the National Museum that showcases the San Diego shipwreck and Fort San Pedro diggings.

There is a park around and inside the fort, and you can look over at the nearby pier and watch the incoming ships in the same way the fort's occupants did over the centuries. The Fort San Pedro Museum contains numerous artifacts like Ming porcelain, coins, lockets, sword fragments, cannons, and helmets.

The church was built by Miguel Lopez de Legaspi and Fr. Andres Urdaneta on the site where the image of Santo Niño, believed to have been left by Ferdinand Magellan, was found in 1565. Considered as the oldest religious relic in the Philippines, the Image of Santo Niño de Cebu was given by Magellan to Queen Juana during the first baptism on April 14, 1521. Today, the image is enshrined at the Basilica del Santo Niño.

The basilica's facade and interiors boast impressive architecture and design, reminiscent of the old Spanish times. Religion is an integral component of the country's identity. Every day, many devotees flock to the church to offer their prayers.

In the month of January, the square in front of the basilica, as well as the streets of the metropolitan, is jam-packed with devotees, street-merchants and tourists for the annual grand celebration of the Sinulog festival. As the Filipino idiom 'di mahulugang karayom goes, a needle can't even drop to the ground while more than 1.5 million people go to streets to partake in the country's most famous festival.

Located in the original Plaza Parain, it showcases the significant and symbolic events in the history of Cebu from the time of Rajah Humabon to the recent beatification of Cebuano martyr Pedro Calunsod.

The monumental sculptural tableau is the work of national artist Edgardo Castrillo. Construction began on July 1997 and it was inaugurated on Dec. 8, 2000.

Provided an all-expense paid vacation package, which of the following historical location in Cebu, Philippines would you want to visit?

If you do get the chance to visit the Philippines, consider putting Cebu and her beautiful locations on your destinations list. I highly suggest that you visit the following above places. Below are even more historical scenes that may interest you.