History Under Budapest: Hospital in the Rock Nuclear Bunker Museum

Castle Hill is best known for its old streets, Medieval houses and spectacular places including the Royal Palace, the Matthias Church or the Fisherman's Bastion.

Not so well known is the fact that Castle Hill is a narrow rocky ridge made up of limestone and marl. And these calcareous stones can be excavated by the action of water or through the efforts of man. Hidden among the nearly six miles of natural caves and tunnels beneath Buda Castle Hill is the Hospital in the Rock, which preserves the history and rooms of an underground hospital that was later turned into a nuclear bunker. 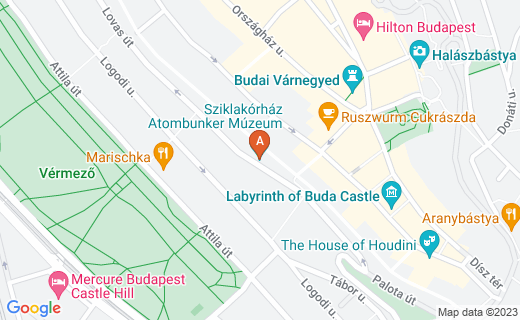 The construction of this subterranean hospital was greatly aided by the naturally created caverns that are found below the hill; through centuries of Hungarian history, these caves served as wine cellars. The idea to use them for a protected first-aid center was first originated in 1935, but the hospital construction works did not begin until the outbreak of World War II. The underground medical facility opened in 1944.

The nearby St. John's Hospital was responsible for supply management and staffing. Dr. István Kovács had been appointed as director, helped by two dozen other doctors – some were on forced labour. Volunteers and Red Cross nurses – a lot of them were from the nobility – joined the staff.

The initial role of the place was the treatment of the injuries related to air strikes only. However it was practically in continous use especially during the siege of Budapest. It was the third longest city siege in the course of the World War II.

Documentary about the Siege of Budapest

The Hospital in The Rock was originally designed to hold around 300 wounded civilians and soldiers together with 40 medical staff working in shifts. But the hospital was extremely overcrowded housing more than 650 patients during the siege of the city. Explosion damaged the water system of the Castle District. The severe shortage of water resulted disaster in the hospital management.The death rate became incredibly high due to infections.

In spite of the heroism of the doctors and nurses lack of medicines further deteriorated the situation.

The facility of the hospital was serving the population of Budapest till June, 1945. Large number of doctors and nurses left the country later.

After the WWII a medical laboratory rented the bunker and produced typhoid fever antidote until its socialization in 1949.

The communist dictatorship decided to further upgrade the facility and classified it top secret in 1950. Several improvements were designed and implemented between 1950 and 1954. An ambulance safe passage way was added, which serves as the entrance now.

The Soviet Union attached Hungary to its collection of satellite states. Hungarians revolted against the communist dictatorship on 23 October 1956. Peter Veres, President of the Writers' Union, read a manifesto to the crowd, which included: The desire for Hungary to be independent from all foreign powers; a political system based on democratic socialism (land reform and public ownership of businesses); Hungary joining the United Nations; and citizens of Hungary should have all the rights of free men.By 18:00, the multitude had swollen to more than 200,000 people.

During the night of 23 October, Hungarian Working People's Party Secretary Ernő Gerő requested Soviet military intervention "to suppress a demonstration that was reaching an ever greater and unprecedented scale. The Soviet leadership had formulated contingency plans for intervention in Hungary several months before.. By 02:00 on 24 October, acting in accordance with orders of the Soviet defence minister, Soviet tanks entered Budapest.

The Hospital in the Rock reopened its gates during the Hungarian Revolution. Many young fighters were treated here as the Castle was one of the strongholds of the revolutionaries.

On 4 November, a large Soviet force invaded Budapest and other regions of the country. The Hungarian resistance continued until 10 November. Over 2,500 Hungarians and 700 Soviet troops were killed, and 200,000 Hungarians fled as refugees. Mass arrests and denunciations continued for months thereafter. By January 1957, the new Soviet-installed government had suppressed all public opposition.

After the consolidation further extension took place due to the nuclear threat. It reached its recent size, 2400 sqm in 1962. The hospital-nuclear bunker was opened at the height of the Cuban missile crisis in October, 1962.

Safety pass, airlock gates, emergency exit and nerve gas filter sístem was built and deployed. The cold war resulted a costly preparation against chemical and nuclear attacks. A housekeeper family took care of the hospital since 1967. The husband operated the engines to clean the air while his wife sterilized the bed linen every second week. Their children grew up here, playing with model railways and biking inside the complex.

After the change of regime of 1989 the hospital was completely renovated between 2006 and 2008. As a result of continous development, nowadays you can experience a huge exhibition with more than 1500 objects and over 200 vax figures in the Hospital in the Rock Nuclear Bunker Museum.

"Even though the government declassified the hospital’s existence in 2002, and this year it will celebrate its 10th year as the Hospital in the Rock Museum Nuclear Bunker the space remains frozen in time, full of mysteries and untold stories. The Seibrigers’ story is one of only hundreds that have emerged since the museum opened.

“Many Hungarians still don’t know about this place,” said Fruzsina Polacska, marketing coordinator for the museum.

Today, the beds in one ward are filled with lifelike wax figures of Hungarian, German and Russian soldiers to depict scenes from when the hospital was first used during World War II."