Now the Oklahoma City National Memorial stands as a testament to the bravery and resilience exhibited by the people who died, who survived as well as their rescuers who stood in that path of horror created in one flash of a moment of time.

One can almost become numbed by listening to the news regarding acts of horrific terrorism all across the world on a semi-regular basis. But when one personally sees some of the detritus of what was left behind after a homegrown act of terrorism that killed and injured hundreds of people, it leaves behind a footprint in the mind and soul regarding all the many lives that were impacted that eventful day.

September 11, 2001 was the fateful event that has been seared into most people's minds all around the world when foreign terrorists flew airplanes into the twin towers in New York, the Pentagon and attempted even further destruction but for the brave souls aboard one of the hijacked airplanes who thwarted their efforts. The death toll that day was astounding!

Our country and most of the world was still reeling in shock over that event when my mother and I were traveling by car to visit our relatives in Iowa about a month later. We decided to stop off and pay a visit to the site of the worst terrorist attack on American soil (prior to the monstrous acts of September 11th) and pay our respects.

Walking through the Oklahoma City National Memorial and Memorial Center one bright October day in that same year of 2001, what we saw will be be stamped upon our memories forever.

Good as well as evil live side by side in this world.

In fact that embodiment of good or evil inside of only one person can work to effect great change for the betterment of life on this planet or work to create immense havoc and destruction.

One example of good and the effects of one person's efforts would be Mother Teresa. Most people are familiar with her working and living among the poor and the good that she accomplished in her lifetime.

One such incarnation of evil (by the name of Timothy McVeigh who has now been put to death over these atrocities) decided to kill innocent people one fine morning of April 19,1995 at 9:02 AM when he and his co-conspirator Terry Nichols knew the Alfred P. Murrah Federal Building in downtown Oklahoma City would be filled with people who were staffing offices, visiting as well as others who had gone to work that day doing their normal sundry jobs.

These were both American men who had grown up surrounded with many of the same experiences many of us have and a value system most of us hold dear. The fact that these two unhappy and misguided individuals decided to express themselves with this horrendous act of violence will probably give criminal psychologists subject matter from which to study for years to come.

3.3 acres in downtown Oklahoma City are now designated as Memorial grounds which includes the area where the Murrah Federal Building once stood.

Hundreds of other buildings were also damaged that April day when the truck filled with a 5,000 pound bomb of explosives tore apart the Murrah building killing 168 people, 19 of whom were children. There was a daycare located inside that building. More than 700 other people were injured.

Thousands of rescue workers and volunteers swarmed into the area to do what they could to save lives and salvage what remained.

The Memorial Center is so touching! It is hard for mere words to do it justice.

It took about 5 years to be developed and consists of part of the original chain link fencing adjacent to a new exterior wall which originally marked off the blast area. People continue to hang stuffed animals and attach photos, letters and forms of remembrance or honor to that fencing which we passed on our way into the center of the Memorial grounds.

There are two Gates of Time standing sentry and from which one can enter the grounds. One has the time 9:01 and the other, 9:03 symbolizing the time prior to the earth shattering event and the minute after it had exploded changing lives forever at precisely 9:02 AM.

A 318 foot reflection pool delineates the space with the peaceful sound and look of water.

An 80 year old American Elm tree that survived the blast has an inscription at its base that reads: "The spirit of this city and nation will not be defeated; our deeply rooted faith sustains us."

This Survivor Tree had shards and remnants of what had spewed forth from that fatal blast that sad day, but like the other 800 plus human survivors it is a living symbol of beauty despite its scars and stands as a sign of resilience to what evil forces had accomplished.

A Survivor Chapel and a Rescuers Orchard honoring those who lived and helped others survive exist within the Memorial grounds. On large pieces of granite recovered from the Murrah Building those survivor names are inscribed.

There is a Children's Area where children of all ages can leave messages onto the embedded chalkboards in the ground. Tiles that were hand painted and sent by children from near and far also adorn this area on the northwest corner of the Memorial grounds.

By far the part of the Memorial grounds that left my mother and me with lumps in our throats was viewing the 168 glass, bronze and granite chairs that sit empty and represent each of the lost lives that fateful day.

Each of them are similar in appearance but each are also slightly different in proportion representing the uniqueness of the individuals killed so heartlessly that day. Each chair bears the name of a person who died inside the Murrah Federal Building. The 19 smaller children's chairs are poignant to view.

Was one of those children the one who might have cured cancer? Was another child the one who would have advanced the goal of curing worldwide hunger? These and other questions we shall never have answered.

The glass portions of the chairs are illuminated at night.

My prayer is that we do not become so inured to hearing about violence that it ceases to touch us deeply. It is too easy to think that other people or cultures are at fault and that we can simply turn a deaf ear. No one is immune from this kind of evil as this act of homegrown terrorism confirmed.

It is difficult to portray the range of emotions that one has when standing in a Memorial area like the one in Oklahoma City. My mother and I were overwhelmed with feelings which at times spilled over onto our faces with tears streaming down our cheeks. We saw other people dabbing at their faces.

Somber reverence permeates the Oklahoma City National Memorial. It memorializes those lives lost that day as well as those who were saved. One does not have to know someone killed or personally affected by this tragedy to be impacted by this site.

All life is important.

This author hopes and prays that this type of senseless terrorism whether homegrown or in countries on the other side of our small planet can soon come to an end. Let's find better ways of communicating and sharing differences with one another and form more peaceful resolutions.

Have you visited the Oklahoma City National Memorial 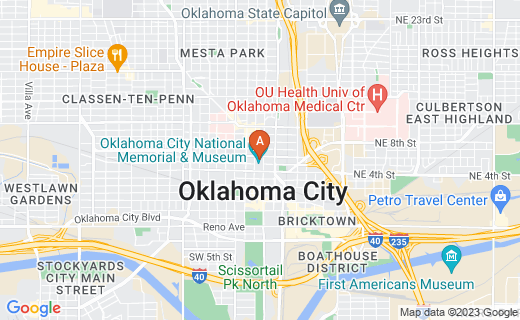