Growing up as a child, I had heard about trips that my grandparents had made to Hot Springs National Park in Arkansas, and it always sounded intriguing to me. Springs bubbling up out of the ground or water running down hillsides emitting steam seemed unique and certainly out of the ordinary. I wished to see this in person someday.

Bathhouses, where people could bathe in the naturally occurring hot water and after bathing get massages, seemed exotic to me as a youngster. When my mother and I planned a trip to Arkansas and Missouri in September of 1995, I ensured that our route would go through Hot Springs, Arkansas.

There were two reasons. One was hearing about it from trips that my grandparents had taken. And the number two reason is that I have always loved seeing our national parks and had hoped to one day see them all. Hot Springs, Arkansas, is the only urban National Park in existence in the United States of America. Most people think of vast expanses of natural beauty when thinking of National Parks. The setting of this National Park is unique.

Established in 1832 as Hot Springs Reservation, this set-aside area that eventually became a national park was originated to protect the many hot springs that flowed from the base of Hot Springs Mountain.

Native people had discovered this site thousands of years ago. Artifacts from Indians, perhaps 10,000 years old, have been found in this area. They undoubtedly came to bathe and drink the clear waters as well as hunt and live in this beautiful area.

Scientists have determined that the waters coming from these springs are approximately 4,000 years old or more. Eight hundred fifty thousand thousand gallons of mineral-rich water is produced daily.

NASA ( National Aeronautics and Space Administration) folks discovered that the most important thing about this particular water is that it is naturally sterile! Because of this, rocks found on the moon have been stored in this pure water.

Most of the springs are capped off to protect the water from contamination, but a few are allowed to run free so that people can see what this area would have been like when the native people first discovered it.

By protecting the springs, people can bathe and drink these pristine waters without having to have the water treated with artificial chemicals to purify it. There are public fountains with the hot springs bubbling up where people are welcome to drink or even fill containers to take with them.

The water averages 143 degrees Fahrenheit or 61 degrees Celsius and therefore emits steam wherever it flows and hits the cooler air temperatures.

People for many years thought that the chemical composition of the water would heal many ailments, and because of this, an industry sprung up around these hot spring waters.

For people with arthritis and similar conditions, the warm waters would have been soothing, and the massages were relaxing. Whether or not diseases or conditions were healed, people kept coming to Hot Springs as the word spread about these warm and mineral-laden waters, especially as our population became more mobile with the automobile industry's growth.

A group of nine buildings built and devoted to this water based industry became known as Bathhouse Row.

There are hiking trails and scenic drives in this Hot Springs National Park. The Grand Promenade right in the middle of town is a 1/2 mile hike and leads one to a point where one can look down upon the central business district. People with disabilities can easily access this area.

Of course, my mother and I drank some of the mineral-rich Hot Springs water while there, and it is pleasant tasting.

The Fordyce was one of the bathhouses in Bathhouse Row. It was centrally located in the string of eight other bathhouses and had its steady clientele as well as tourists passing through its doors in the height of activity in days past.

Originally the bathhouses were simply tents over the hot springs or similar elementary structures. As time passed, wooden structures were built, but they often burned to the ground. Eventually, what became Central Avenue in Hot Springs, Arkansas, was the protected creek put into a channel and roofed over and housed under a road.

The government took an early interest in protecting this unique area, and portions of Hot Springs, Arkansas, became our nation's eighteenth national park. Health seekers all across the nation sought the healing waters that naturally occurred in Hot Springs.

Each bathhouse competed with the other ones to lure customers into preferring their establishments for return treatments and entertainment. Music was played, and gambling took place. Dining rooms offered the best in food and drink. Every detail was meticulously addressed to make clientele want to return to that particular bathhouse.

The Fordyce was no exception. It exemplified the luxury offered to people seeking the healing waters and medical therapies provided at the time in Hot Springs. The Fordyce bathhouse opened in 1915 and got its name from Colonel Samuel W. Fordyce, who claimed that his life was saved by the healing waters emanating from the hot springs. Suspending operations in 1962, the Fordyce became a Visitor Center for the National Park Service and today is open to the public to view the rooms and exhibits from the past.

My mother and I explored the building and marveled at the lavish use of building materials, including marble, tile, stained glass, etc. The men's areas are separate from the women's areas of the bathhouse.

Whichever bathhouse had been used by my grandparents, we now had a clearer understanding of how they would have been treated. Many of the original bathhouses now serve different purposes. However, one can still take in the luxurious spa experience and hot waters in the ones that are still operating as in days past. Both of the postcards shown above were picked up by my grandparents when visiting Hot Springs National Park. Both of them were published by Connelly Press, Hot Springs, Arkansas. And both state "Genuine Natural Color Made By DEXTER PRESS, Inc., West Nyack, N.Y."

The writing on the back of the first postcard states the following:

On the second postcard it reads:

I think that it is fun to insert old vintage postcards of what my grandparents would have seen and where they would have stayed and, in some cases, dined. Just knowing that we were retracing some of their steps made it enjoyable for us as well. My mother and I walked on the Grand Promenade in town and had wandered through Arlington Park. We had viewed and drunk from hot springs. Before leaving Hot Springs, Arkansas, we made one additional stop in the park.

High above the city of Hot Springs on a hillside sits a 216 foot Mountain Tower.

One can see a beautiful panoramic scene that takes in about 140 miles from the top of the tower. Looking down on Hot Springs, one also views the Ouachita Mountains and surrounding Diamond Lakes amidst much greenery.

Initially built in 1877 by Enoch Woolman, it was a 75-foot structure. After being struck by lightning and being burned, a second tower was built and made of steel. Standing 165 feet tall and named the Rix Tower, it stood for over 60 years until being replaced by the Mountain Tower standing in this spot today.

An elevator takes one to the observation windows at the top of the Mountain Tower for an excellent overview of the Hot Springs National Park and surrounding area. It is worth a stop and look.

Hot Springs National Park is an area not only filled with 47 hot springs, but its warmth and charm will stay with you if you are lucky enough to visit this Arkansas site. Who knows, you may even find your own "fountain of youth" there!

Have you ever soaked or bathed in a natural hot spring? 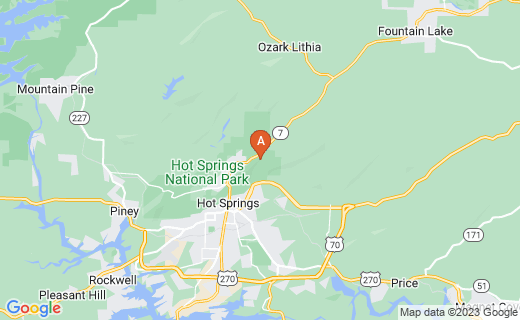