The First Doctor in Columbus, Ohio Founded its First City Park Near a Famous Hospital

A Hospital Leads to a Famous Park

An acquaintance at OhioHealth asked why one of the hospital campus streets is named "White Cross Way." I explained that I was born at White Cross Hospital in Goodale Park, and then the facility moved north, became Riverside Methodist Hospital, the anchor of the modern OhioHealth System.

Before it was White Cross, it was the small Methodist-affiliated Protestant Hospital (1891 - 1957), to distinguish it from the only other Columbus hospital that was operated by the Catholic diocese.

Goodale Park was named for the first doctor in Columbus, Lincoln Goodale, who donated the land while treating the sick and injured on the west side of town and at the Catholic facility on the Near East Side. The park was developed from 1851 through the Civil War, used for many celebratory events and even military training. The idea of the modern park began with the formation of three urban parks: Lafayette Park in St. Louis, a park near the Smithsonian in Washington D.C., and Goodale Park in Columbus.

Goodale Park initially included a stone east gate and smaller side gates, a horse stable, additional animal sheds, a gazebo, a large stone gate at the south entrance, and a sculpted bust of the founder atop a pedestal at that gate.

In 1892, a pagoda-style gate was installed on the north side on Buttles Avenue, sculpted with character faces from Shakespearean plays.

Inside the gates, children could ride on swing sets near a large pond maintained at the northeast sector, where White Cross Hospital was built. A large fountain was added later and in the 2000s, the pond was drained and reconstructed for cleanliness. Picnickers have always always welcomed.

In the year 1900, a male "kissing bandit" lived near the park and walked to and from work nearby. He had the hobby of quickly hugging women passersby and running off down Park Street. Enough women complained that he was arrested and fined, but released.

Circus in the Park

The Sells Brothers Circus was headquartered in this Columbus neighborhood called Sellsville in the late 1800s and again at the beginning of the 20th century.

Peter Sells built a mansion across the street from the west side of Goodale Park and the mansion stands today, fitted with circus memorabilia saved from Sells Brothers.

Peter provided the animals for the park's popular menagerie attraction as well as the circus and the northwest part of the park was full of animals he raised.

The Columbus Zoo was founded later, 13 miles north on High Street, which was farmland and a small fishing resort at that time. 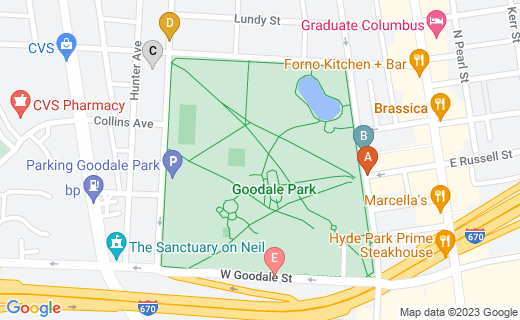 The famous Reverend Billy Sunday operated a tabernacle here on Park Street from 1903 to 1935.

This historic house is near to the old site of Protestant Hospital at 777 Dennison. The Doctor and Hospital of Goodale Park

Doctor Lincoln Goodale offered medical services from his home in Franklinton, just west of today's Scioto Mile Park Complex in Columbus. He also worked in the Catholic clinic just nine blocks away from his home: St. Francis Hospital and Starling Medical College (founded 1847), which was the first teaching hospital in the country.

Goodale soon became a trustee of the facility, which became Grant Hospital and Nursing School, now also a part of Ohio Health. Starling Medical College joined with four other such schools to become The Ohio State University College of Medicine.

Lincoln Goodale served as a pallbearer for President Abraham Lincoln when the casket arrived by train to repose in state at Capitol Square in 1865. Riverside Methodist Hospital displayed a large lighted white cross on its rooftop in North Columbus near the Olentangy River until the 1980s. That era brought a planned reconstruction and expansion, with the addition of several new wings and annexes.

Today, the hospital complex is like a busy city!

OhioHealth is a nonprofit heathcare system that treats everyone with respect and high quality care. This service follows closely in the footsteps of Dr. Lincoln Goodale and he would be proud to witness the care positive results.

Before the American Civil War, Columbus had only two small hospitals, three doctors, and few nurses. The physicians persuaded the Sisters of the Poor of St. Francis to move to Columbus to become caregivers in 1861. Later, Confederate P.O.W.s were housed nearby. 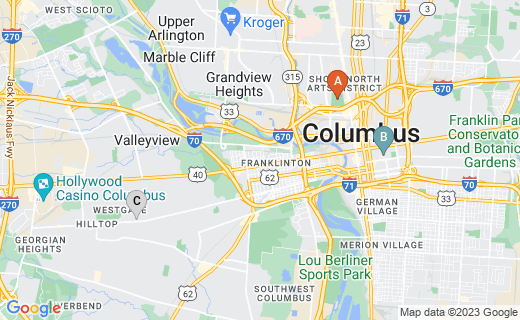 A Resort Park Becomes a Community

Dr. Lincoln Goodale (1782-1868) provided free medical services to American troops during the War of 1812. In the American Civil War, he donated services to both Union and Confederate soldiers at Camp Chase, just west of his Franklinton home. He also continued to donate services to the poor, using his income from large real estate deals and his general store, which the first in the state to stock medical supplies.

In 1851, the kind physician donated approximately 35 acres 1.5 miles north of Capitol Square for a park and tourist resort, the only outdoor recreation facility within in several counties.

The park opened with a large enclosed brick shelter house that is now on the list of National Historic Places. Goodale and the founder of the famous Neil House Hotel downtown sponsored 60-foot-wide streets on the east and south borders of the park to ensure easy access by horse carriage.

The park temporarily became a blighted high-crime area in the 1970s, but redevelopment happened quickly. Under several mayors, Goodale Park became a showplace where the annual Community Festival (ComFest) and the Independence Day Doo Dah Parade provide fun for everyone just 14 blocks from the Ohio Statehouse in the Short North. The idea below was captured with a drone's camera.

Most Ohio cities in the late 1800s and early 1900s were not melting pots, but pockets of enclaves of people from other countries. Columbus was different - immigrants used to immediately move into the neighborhood just south of the park.

The area welcomed almost 20 different nationalities at once into what was nicknamed "Flytown" and had no ghettos of ethnic cultures - people of different countries lived next door to each other and were happy. People seemed to come from everywhere and fly in like a huge flock of birds to settle the area.

Flytown quickly developed diverse businesses that included restaurants serving the foods from the "old countries." This helped to give rise to the diversity at the open air Old North Market that circled four blocks downtown beginning in 1876 and is now located south on Neil Avenue a few blocks from the park.

I remember seeing farmers and vendors of at least a dozen cultures there in the 1960s, from affable fishmongers to kind Gypsy fruit vendors. Today's market under roof is still diverse, but directly in the area that was Flytown.

It is generally forgotten that Native Americans lived in Columbus then as well. A few of the indigenous people are scattered throughout the city today and operate the Native American Indian Center of Central Ohio.