How to Reserve Anything on Belle Isle

Belle Isle has been a point of contention in Detroit politics since before the Emergency Manager was even announced in 2013. During bankruptcy proceedings, it was leased to the state of Michigan which now manages it as a state park. It's also one of our favorite spots in Detroit. So when it came time to plan the wedding, we decided to host it there. That's where the whole state-taking-over-from-the-city thing threw a wrench in our plans.

In prior years, all of the facilities on the island could be booked starting on March 24 of that year. Now, everything is reserveable up to one year in advance. The city has finally taken down their Belle Isle page, two months after the shift from a city to state park, but in the last two months we've chased down threads of information about the various sites and finally have a comprehensive understanding of what to do.

Belle Isle is a Michigan State Park in the Detroit River 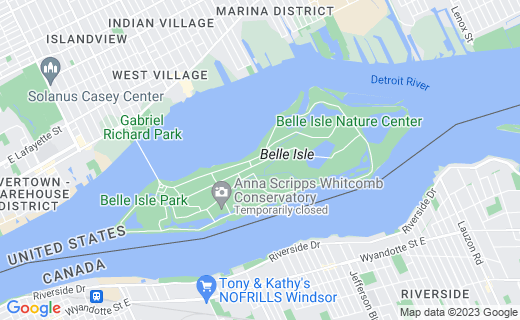 All 21 picnic shelters must be reserved through the MIDNR website or over the phone at 800-44-PARKS (800-447-2757). That's also where you can get a fishing license. When we were out there booking our wedding sites, DNR was driving around checking that people had licenses and it wasn't even prime season yet. The State of Michigan has provided a rate sheet here, though I will note, 8W and 8E each have electrical hook-ups now. You no longer have to rent both halves of that shelter to get electricity.

*NOTE: As of April 2015, it appears that Shelters 1-7 are closed through the end of June. If you've got your heart set on one of those, you'll have to talk to the park office.*

For everything else, you've got to go to the Administration Office in the White House on Belle Isle and talk to the park staff, or call them at 313-628-2081. The State of Michigan has provided a rate sheet for everything including the Flynn Pavilion, Belle Isle Casino (not that kind of casino), the Conservatory, the fountain (you do have to have a permit to do a private photo shoot there), and ball fields for various sporting events. Reserving a site through the website or the office does NOT include your alcohol permit, though. If you don't have one, you cannot consume alcohol of any kind on the island. The state police are patrolling for that now. You'll also have to go to the office for a $100 permit if you want to drink on the island.

They will also rent you to reserve space on the island for longer photo and video shoots, but the rates haven't been set from what I can tell.

Although I will say, based on our engagement shoot, no one is going to bother you if you're just walking around with a photographer and not asking anyone to accommodate you. (It is important to note that this shoot was done in April 2014, before the state took over official oversight of the park and before the typical park season begins in Michigan. Your mileage may vary. That said, I don't think it's unreasonable to go out there with a camera and take pictures.)

So there you have it. Are there any other Belle Isle sites you're curious about that I've missed?

Have you been to Belle Isle since it became a state park?