Situated on the north-western edge of Chiang Mai, North Thailand's main city, Namtok Huay Kaew is a lovely waterfall (namtok means waterfall in Thai) and mountain stream set among the beautiful forested slopes of Doi-Suthep-Pui-National Park. Thai people and expats like me often go there to enjoy the peaceful natural surroundings of the area. Tourists are a rare sight, however, as most don't know about this place. The reason for that is simple. It's completely free to enter and stay as long as you like, which means there's no money to be made by tour companies selling tickets. So no-one promotes it, unlike the classic Chiang Mai tourist resorts, such as Tiger Kingdom, the Elephant Training camp or the Night Safari, all of which cost money to enter, and are promoted all over town - and beyond.

It's not the most spectacular waterfall in the world or even in Thailand, but it has a charm all of its own and the surrounding scenery and the many rock pools at the bottom provide excellent areas to sit around and have a picnic. The falls are at their most impressive towards, and just after, the end of the rainy season in November, and a few of the pools are deep enough to swim in, but for most of the year, they're shallow and kids can safely play in them to their heart's content. Keep in mind, too, that mountain stream water is colder at any time of year than lake or sea, water even in a hot tropical country like Thailand.

You can climb up on the right-hand side of the falls, but the rocks can be very slippery, especially after rain, so keep well back from the edge.

The falls and surrounding area are part of Doi Suthep-Pui National Park and have no facilities other than what nature provides. The entrance to the park, however, has quite a few food stalls where you can stock up on any refreshments to take into the park area. There are also places to sit and order a cooked meal.

Getting to Huay Kaew Waterfall and Picnic Area

The entrance to Huay Kaew Waterfall and Park area is located in the far north west of the city at the foot of Doi Suthep-Pui National Park. Getting there is easy if you flag down a tuk-tuk taxi or a red songthaew shared taxi.

The journey time is around 20 or 30 minutes from the centre of Chiang Mai and should cost around 3 or 4 dollars by tuk-tuk and around $2 per person for a public Songthaew unless the driver offers a bulk charge if there are more than two of you. A songthaew may take around ten minutes longer as, unlike privately hired tuk-tuks, it's a public service and the driver may pick up other passengers who are going in roughly the same direction.

Note* Don't flag any other colour of songthaew as those have fixed destinations and stops. Only the red ones can be requested to go to destinations of your choosing.

Getting back to town involves taking one of the waiting songthaews parked at the entrance. You might have to wait for one willing to take you, however, as most drivers are hoping for passengers who want to go further up the mountain to Doi Suthep Buddhist Temple, Phuping Palace or Doi Pui Hmong Hilltribe Village. If you don't want to go to any of those places, and don't want to wait, just walk out, cross the main road and flag down any passing songthaew coming down the mountain road. Some may have passengers already, so the driver might decline to take you to your part of town if it's not on his intended route. If so, it's no problem. Another one will be along in a few minutes.

You won't see any tuk-tuks coming down, though. as they're not able to get up there in the first place. You'll only get a tuk-tuk if one has come from town and is dropping passengers off at the park entrance. 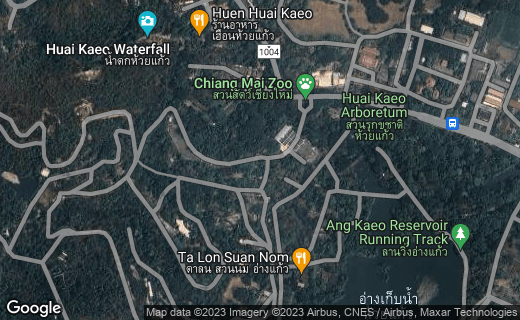 So, if you're visiting Chiang Mai and have no plans to go anywhere fancy one day, Huay Kaew waterfall and park area is a cheap and enjoyable day out that is just 30 minutes from town. I recommend it.

If you want to go further up the mountain instead of back to town, look at the map below. Any songthaew driver, will take you as far as you want, or as far as the road is drivable, and offer to wait for you and bring you back to town - You can negotiate a price, depending on how far you want to go. Most people want to go as far as Wat Doi Suthep Buddhist Temple or else to Doi Pui Hmong Hill tribe village.