This article is about the Hutu people for the letter H of the A to Z African People Series.

Who are the members of the Hutu?

The Hutu are also called Bahutu, Wahutu or Abahutu.The Hutu and the Tutsi have intermarried and they speak the same language. According to historical, linguistic, and cultural definitions of ethnicity; I read that the Hutu and Tutsi are not distinct groups; I do not understand why this is, since "ethnicity" is defined as: Identity with, or membership in a particular racial, national, or cultural group, and observance of that group's customs, beliefs, and language. Even though they share many cultural practices, violent civil conflicts have polarized them. Based on history records,the most important difference between the Hutu and the Tutsi have been toward their occupations and political backgrounds. Traditionally the Hutu have identified themselves as agriculture people, at the same time the Tutsi were the cattle-owning political elite.

The Hutu and the Tutsi are groups living primarily in east-central Africa in:

In 1972 thousands fled into Burundi, then when civil war erupted in Rwanda in 1994, millions of Hutu and Tutsi fled to refugee camps in neighboring countries. They started returning in 1996. Most reference sources estimate that both countries have a national population of approximately:

Almost all Rwandans and Burundians live in rural areas. Traditional Hutu houses are huts shaped like beehives; made from wood, straw, and reeds. Modern houses have been made with modern materials.

Marriages are legal when the man's family pays (with cattle, goats, and beer) to the bride's family. The bride's body is covered with herbs and milk to make pure the wedding ceremony.

How do they communicate?

The Hutu people speak: Kinyarwanda, Kirundi, French and Swahili. Only about half the people in Rwanda and Burundi can read and write in their native language. Even fewer can read and write French. There are schools for teachers and at least one university in each country. Well educated persons speak French. Rwanda's educational system was disrupted by the 1994 conflict.

Greetings of the Hutu are:

Most Hutu have been farmers. Raising and herding cattle are ranked more highly than raising crops. Women take care of the home. They also plant, hoe and weed the crops. Men and boys look after the livestock and clear the fields to prepare them for planting.

This is my seventh hub of the series on African people. I have had quite a long trip searching, finding, exploring and living what I have not lived physically, but in emotions and in spirit, it captures more and more of my human appetite to know about the land I want to live in. I am seeing my life as in a mirror; all the worries I have had will never be called worries or problems compared to what others have and are struggling with. I just can not imagine what it is to hear steps of soldiers waking me up and seeing my home on fire, and my family being killed by my own people... Could you?

I once saw the trailer of the video below, but as I was in the process of writing this article, I found out that it was about the same people I just presented ...the Hutu people. Watch and seek in your heart if it is possible to do something in the behalf of those who suffer...first yourself, than your family, as you keep stretching out to your neighbors, without forgetting the rest. 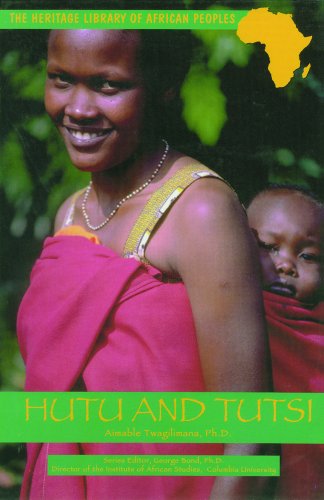 More about the Hutu people