I Hit A Deer On Iowa Highway 1

I hit a deer. I was headed north and home to Cedar Rapids, Iowa after doing some work in Iowa City. At 5:00 PM the Interstate traffic was crazy, so I decided to take Highway 1, a leisurely, if longer, way home. Traffic north was heavy and moving slightly less than 60 miles an hour. Fortunately, oncoming traffic was lighter. There was no warning. I saw the deer at the instant of first impact on the right front of my car; it then smashed into my windshield and just disappeared. I slammed on my brakes-- a bad idea, but reflexive-- and hurtled sideways down the highway. There really was no time for fear, but the mind is funny. I processed the fact that I'd hit a deer and that the steep embankment on the opposite side of the road was sliding past the front of my car. I remember wondering whether I'd hit that grassy wall or get T-boned by some poor slob headed home like me. I let up a little on the brakes and the tires took hold; I headed for the ditch. Another thought: how fast was I going? It turned out I'd slowed down just enough to hit the ditch with the front of my car stopped by the embankment. I put the car in park, turned off the engine and just sat there. The rest of the world started coming back into focus.

I opened the car door and got out. Traffic had slowed. A woman approached and asked if I was all right. I looked at her, blinked a couple times and said I was fine. She asked me what happened and I told her I'd hit a deer. She had been behind me and said she'd seen something like a huge piece of cardboard fly ten feet over my car. We both looked around and then we saw the deer lying in the middle of a road intersecting the highway. It was on its side but moving its head, struggling to get up. It was... horrible and I felt a great sadness, seeing that beautiful animal dying and not able to put it out of its misery. The fact that I could not have done anything differently, that it must have jumped out of the ditch and it was my bad luck to be there, did nothing to diminish the grief I felt. 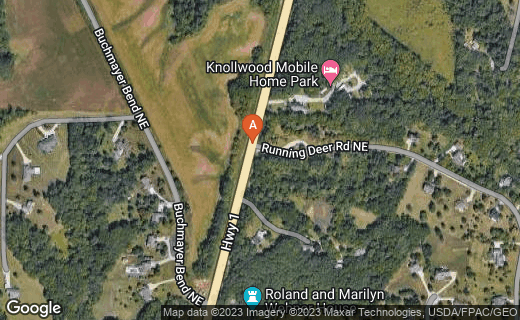 I called 911 and the operator first determined that no one was injured and no other vehicles were involved. She asked me where I was. I asked one of the men who had joined us if he knew the name of the road. He looked at me, paused, and said, “Running Deer Road”. I asked if he was kidding me; he shook his head and I repeated it to the operator, who also paused before telling me that a sheriff's deputy would be there soon. It was starting to get dark.

The Deputy Assesses the Situation

We walked across the highway towards the deer. Thankfully, it was still now. I didn't have to watch it suffer up close, though that didn't make me feel any better. Soon, a deputy arrived and she talked to me and examined the scene. My car is a 1995 Camry and not worth much. I started it up and tried to move it but it was stuck. The right fender was smashed up, as was the passenger side of the windshield, the mirror was gone and the antenna on the back of the car was broken. Somehow, the headlights worked and, even though the turning signal housing was gone, the bulb still worked. The deputy called a tow truck and said it wasn't necessary to write up a vehicle accident report because vehicle accidents caused by deer which result in no injuries and under a certain amount of damage don't require it. I mentioned that I'd never had an accident before. She looked at me skeptically and asked, “You mean you've driven all these years in Iowa and this is the first deer you've hit?”.

The tow truck winched me out of the ditch and my Camry was deemed drivable. I thanked everyone and, oh so carefully, made my way home. I'd also called my wife several times, so she was waiting for me when I got home. She was glad to see me.

Iowa Near the “Top”

Iowa ranks second in the nation, behind only West Virginia, for car/deer accidents. In 2011, there were more than 10,000 such accidents in the state. I guess my number was up, but I was lucky the deer didn't come through the windshield and lucky there was no oncoming traffic. We see lots of deer in town. At least once a week I see three to five deer on my way to work. They can be standing right next to a six-foot fence and simply hop over it. I've seen them stop and stare at an oncoming car and suddenly leap out in front. Fortunately, at speeds of 25 to 35 mph, they can usually be seen and avoided. I try to keep a sharper lookout for them but they are harder to spot in the country.﻿

I still see that suffering animal in my mind's eye.