What does the name "Ohio" mean?

It does not mean "beautiful", for that is a misconception arising from the old-time song tribute to our river, Beautiful Ohio.

Ohio means "big river" in an Iroquoian language, so the song title in full English is Beautiful Big River. In fact, our 980-mile long Ohio River running along the state's southern border to meet the mighty Mississippi was named by my ancestors in the Iroquois Confederacy. Their word is O-Y-O (three syllables), whose meaning is big river or great river. In English, our state song could also be Beautiful Great River.

A French explorer named Rene Robert Cavelier Sieur de La Salle was first of the Europeans to see the river, in 1669, and called it la belle riviere. Later, an American wrote Ohio's State Song after the French name to result in Beautiful Ohio. This is why much of the public thinks that the "Indian" name for the river is "Beautiful River." However, 10,000+ years ago, we called it Big River. It was big and so were the fish in it - at least as long as a tall man's arm, every fish.

Our river is the Big River in the Ohio River Valley. Along its many miles in Ohio is an incredible array of bridges, parks, and great historic cities.

Source of the Ohio River: Pennsylvania and West Virginia 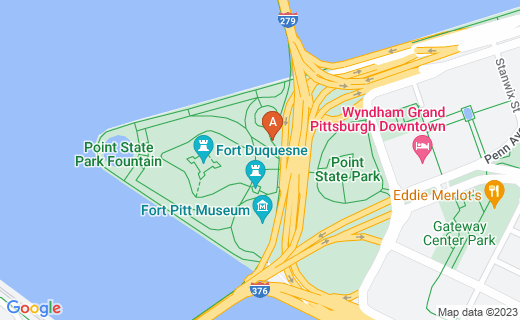 See photo of the rivers joining at the top of this Hub.

The Ohio River starts up to the northeast in Pennsylvania at The Point around Point Park in Pittsburgh. The Allegheny River to the north and the smaller Monongahela River from West Virginia to the south come together and form the Ohio River. Three bridges cross the three rivers in this point area. In the photo above, the West End Bridge crosses the actual Ohio River in the foreground, with the Allegheny to the left and the Monongahela to the right in the background.

The Ohio flows southwest to Wheeling WV, where the first bridge was built across the river anywhere along its length in 1849. This was a during period of infrastructure construction during which my non-Native American ancestors worked on the National Road that included the Wheeling Suspension Bridge, seen below.

The distance from The Point to the Wheeling Suspension Bridge is about 100 miles along the river, but only about 70 miles over roads.

The River Reaches the State of Ohio at Historic Wheeling WV

Hundreds of Miles of Landmarks

Beginning with Wheeling Island, there are at least 88 islands in the Ohio River by the time one reaches the joining with the Mississippi River at Cairo IL. Along the way between Pittsburgh to Mississippi, the river includes 20 locks and dams, closer together in the first half of the river and farther apart past Portsmouth OH.

Hannibal Locks and Dam is located in the Pittsburgh Area. Blennerhassett Island Historical State Park and Museum is open to visitors every year from May 1 to October 31 and is located in Parkersburg WV (see links for these and other landmarks in the links further below).

The Ohio River Scenic Byway on the Ohio side of the river is 452 miles long and travels through 14 counties. The Museum of Ceramics is in east Liverpool OH, just south of Wheeling. In Bellaire OH south of East Liverpool, National Imperial Glass Collectors' Society, Inc. has a long-time museum. Glass and pottery works were prolific along the river for some time and older pieces often have high values.

Along either Ohio Road 7 or West Virginia Road 2 that run roughly parallel with the river on either side, Marietta is about 88 miles southwest of Wheeling.

On the Ohio side, travelers can visit several small towns involved in hydroelectric power, mining, farming, and steel manufacturing as well as historical sites such as old iron furnaces. I also like passing through part of the Wayne National Forest.

In Marietta, you will find the Ohio River Museum with constantly updating exhibit and a permanent exhibit about the historic Steamboat Era. This city as founded in 1788 after the Anerican Revolution to become the first permanent community in the Northwest Territory.

The Ohio River was vital for transportation and receiving supplies. A historic railroad bridge is now maintained as a footbridge. The Campus Martius museum complex preserves several sites from beginning of Ohio history after European settlers and migrating people from the original 13 Colonies moved westward and founded Marietta. A castle, a toy museum, and paddlewheeler tours add to the history.

Overlooking Ripley on the river, the Rankin House is a State Memorial and a National Historic Landmark, recognized as critical to the Underground Railroad. it Standing on Liberty Hill, it is celebrated as key for the state's defense during the Civil War.

South Point is the southernmost community in the State of Ohio, near Portsmouth. Moving past South Point, Point Pleasant is the birthplace of President and General Ulysses S. Grant.

Cincinnati is a major city on the Ohio River, nicknamed the Queen River City and known historically for its heavy steamboat and paddlewheeler traffic. The first McDonald's restaurant on a paddlewheeler was opened in this city in the early 1980s, although it is no longer there.

The National Steamboat Monument is located here, though, not far from the National Underground Railroad Freedom Center. The Roebling Suspension Bridge is still in use, a prototype on which the Brooklyn Bridge was based by Mr. Roebling. Seven other vehicle bridges are active, along with a foot bridge called the Purple People Bridge. Cincinnati is full of landmarks.

The last site to visit on the river before reaching Indiana is Shawnee State Park. It is home to the historic Springhouse School and Log Cabin, along with Native American earthworks and a large wildlife preserve. North Bend, Ohio is located nearby, with a wonderful view of the Ohio River from President William Henry Harrison's monument.

Cincinnati is also an anchor city of the Ohio Space Corridor that encompasses many of the over-1,200 aerospace businesses active in the state,

Major Cities Along the Ohio River 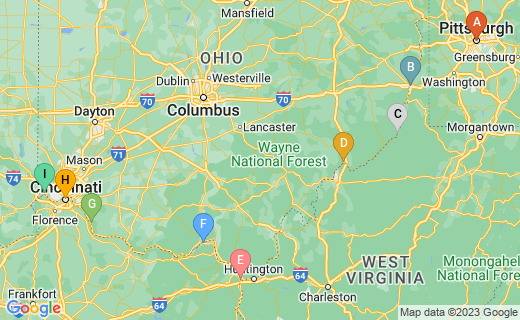 The river goes on to border Indiana, Illinois, and Kentucky to Cairo IL and the Mississippi River. The entire Ohio is used by business and the public.

Eight US Presidents From Ohio

Five US Pesidents came from the Ohio River. William Henry Harrison lived in North Bend before his election to the Presidency; Benjamin Harrison was also born in North Bend. Ulysses S. Grant was born in Point Pleasant. Rutherford B. Hayes was born just north of my city in Delaware OH and was city solicitor of Cincinnati on the river for several years. William Howard Taft was born in Cicncinnati and held several important offices before serving as President. His descendants have often held birthday parties at King's Island just north of the the Queen City.

James A. Garfield was born near Cleveland, William McKinley in the same area, in Niles, and William G. Harding from Bloom Grove in North Central Ohio.

All of these Presidents' birthplaces are National and State Landmarks.

Ohio also has a few landmarks dedicated to our astronauts.

The first man to set foot on the moon was Neil Armstrong, his hometown in Wapakoneta dedicated completely to his memory. A space related museum has been operating there for decades.

The first man to orbit the Earth is John Glenn. In his 90s, he is still teaching at The Ohio State University in Columbus Ohio and young students love to listen to him. He was instrumental in founding the John Glenn Institute for Public Service and Public Policy at OSU, the institute being a landmark in itself. February 7 is Friendship 7 Day in Ohio in commemoration of his space capsule of 1962. John Genn is the only astronaut to fly into space on two dates 36 years apart -- His age at his second launch was 77 aboard US Space Shuttle Discovery, Mission STS-95 in 1998. His birthplace in New Concord OH is a National Historic Place.

Twenty-three (23) other astronauts have been born in Ohio and one came from Cincinnati on the Ohio River: Karl G. Henize. many of the others are from Northeastern Ohio, followed by Central Ohio.

The astronauts of Ohio are all part of the History of Aviation Heritage Trail and the Ohio Space Corridor that runs from Cincinnati up through West Chester-Dayton-Fairborn to Columbus and is a living tribute to the Wright Brothers. The National US Air Force Museum at Wrigh Patterson Air Force Base in Fairborn is a huge landmark with outdoor and indoor displays and presentations from the beginnings of flight through the space age. 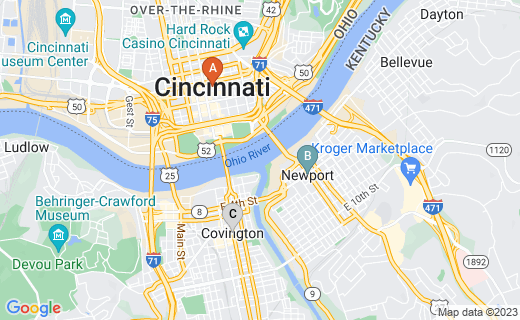 The Bridge That Helped Union Troops Transport Supplies and Men