In Pursuit of Art Nouveau Buildings in Budapest

We have already got used to accidentally coming across wonders in every street of Budapest’s inner districts. It is only enough to look up to a house facade or take a glance at a doorway.

Those who often wander around Lipótváros may have already noticed the Bedő House, the apple-green building beautified with floral motifs. The appearance and the history of the building themselves are intriguing.

Art Nouveau appeared towards the end of the 19th century stemming from the fields of decorative and applied arts, then it also expanded to the fine arts and architecture. This is why a strong link remained among these fields, and thanks to this, we can design complete interiors with Art Nouveau furniture and personal articles.

In Hungary, the first Art Nouveau motifs emerged on buildings in the 1890’s, and the Hungarian Art Nouveau architecture was already in prosperity by the turn of the century with artists such as Ödön Lechner, Ede Magyar, Emil Vidor, Frigyes Spiegel, Ferenc J. Raichle, and Béla Lajta. It reached its zenith in the first decade of the 1900’s with the Löffler brothers, the Kármán and Ulmann designer partners, and József Vágó’s works of art.

The parcel at 3 Honvéd Street in the 5th district was owned by the City of Budapest until it was sold to Béla Bedő and his wife in 1901. To design the house, 2 years later, he asked Emil Vidor who previously had had the chance to get familiar with German, French, and Belgian contemporary architecture and the Art Nouveau style by studying abroad. He had also worked beside Miklós Ybl when building the St. Stephen Basilica, had been the director of the architecture design office of the Ancient Buda Castle since 1894, a construction intended to be finished by the Millennial Exhibition. Vidor’s own office, opened in 1986, envisaged the Palatinus Houses standing at the beginning of Pozsonyi Street as well as several buildings of the Civic Brewery LLC.

The house constructed for the Bedő family is a glamorous masterpiece both inside and outside. Emil Vidor created an asymmetric facade and carefully excogitated the wallpaintings as well as the colorful lead glass windows and the cut glass decorations. The ceramic flowers of the facade were manufactured by the Zsolnay Porcelain Factory in Pécs.

The Bedő House survived the siege of Budapest in 1944-45 and the events of the 1956 revolution. A workplace canteen was operational under its roof throughout the 1960’s, furthermore, the National Federation of Cooperatives used the building until the system change. Its condition deteriorated by the 1990’s.

After having purchased the rooftop in the 2000’s, building entrepreneur Tivadar Vad accepted the challenge of renovating and reconstructing the entire building in 2003. He opened the Art Nouveau Coffee House and the exhibition on the ground-floor in 2007. 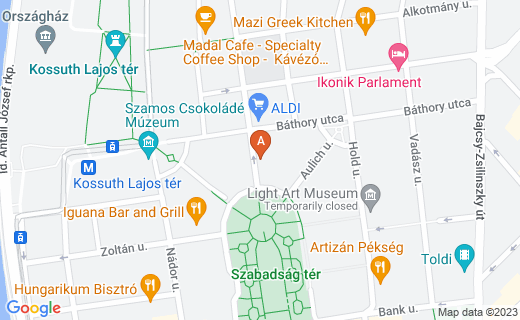 A tender was announced in 1899 to create a bank center in Budapest, and eventually the famous architect Ödön Lechner won the contract. By designing this building, Lechner conceived his most significant artwork which best represents his individual style. Art Nouveau is usually characterized by floral and animal patterns in a stylized fashion rich in details.

Visitors of the former Post Office Saving Bank can receive information on how many different animal motifs decorate the building that now functions as the headquarters of the Hungarian State Treasury. Furthermore, you can get to know where the bull head motif originates from, and why Ödön Lechner could not participate in any further state funded projects afterwards. 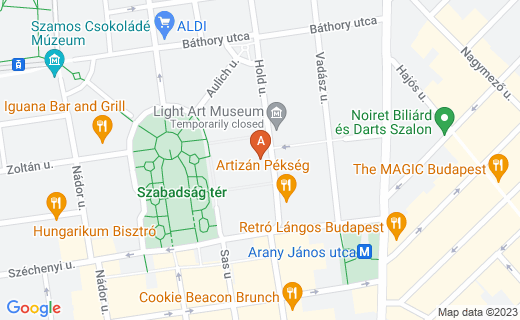 This magnificent building was constructed between 1908 and 1909 for the Parisiana Club. It was designed by Béla Lajta, one of the most talented architects of the age. The appearance of the facade is defined by the grey colored marble cladding, which is embellished by the attic decorated with bronze relief cherubs. Sadly, all these were destroyed for no apparent reason in the 1960’s, but fortunately, a reconstruction was possible between 1987 and 1990. Currently, the building serves as home for the New Theatre. 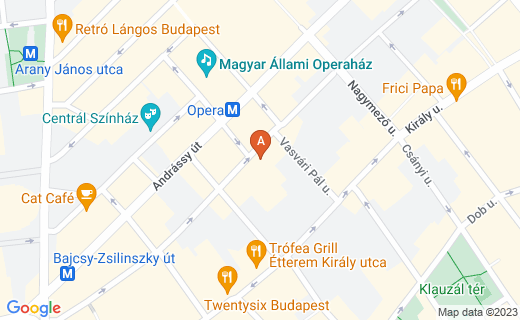 You can find the one and only Napoleon sculpture in Budapest here. However, it was not named after Napoleon I, rather after his cousin, Napoleon Louis III, who became an emperor with a coup d’etat. In the old times, when a flee market stood at the place where now the Opera House shows off its beauty, and where Danube sailors were carousing in the street nowadays still bearing the name of Hajós (Sailor), a pub, called Cafe Napoleon were run dedicated for Napoleon III, the French emperor of the time. The name stayed, and a sculpture was erected on the building.

The building planned by Henrik Böhm and Ármin Hegedűs, and inaugurated in 1906, stands on Szervita Square. On the top of the ferro-concrete structure there is a glass facade enriched by Miksa Róth’s beauteous mosaic picture, the ‘Glory to Hungary’. Unfortunately, we cannot see the statue of Atlas holding a globe in his hands anymore as it was destroyed during World War II. 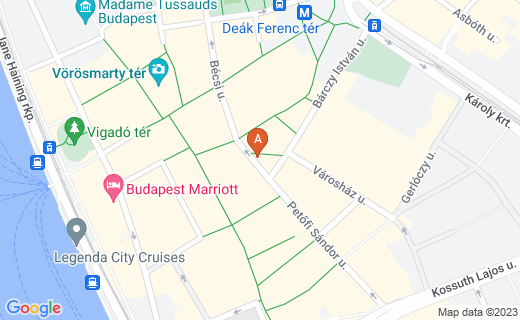 György Ráth (1828-1905) was the first director general of the Museum of Applied Arts. He bought the villa in 1901, then he and his wife furnished it with various works of art. The building was transformed by Géza Györgyi, the staircase railing was created by Gyula Jungfer, an excellent wrought-iron artist at the turn of the century, and the furnishings of the hall were made by an outstanding personality of Hungarian Art Nouveau, Pál Horti. 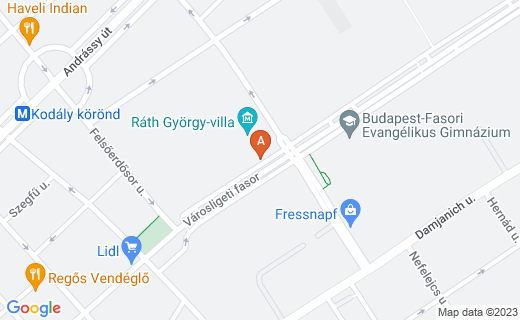 Which is your favourite building?