Each part of the flags in the above military monument in Lima, Ohio is made of bricks, each brick standing for a local military veteran. Each brick wall stands for one of the 5 main branches of the US Armed Forces: Army, Air Force, Navy, Marines, and Coast Guard.

The Beyond.com job search and trending website named Fifty Top Places in America to Find a Job in 2014 and Ohio has at least one city on the list.

A city of 38,800 residents in 2012, Lima, Ohio ranked Number 11 and Forbes.com ranked the city Number 165th for business and careers out of hundreds of small cities and towns in America. What makes Lima special? 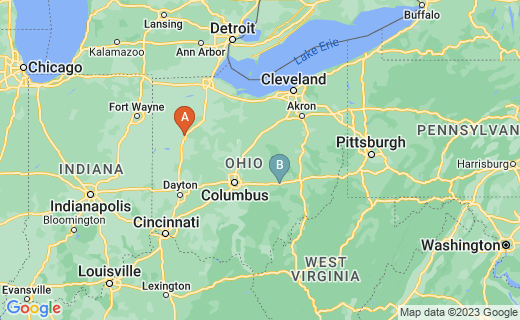 Ohio Oil and Gas, by Jeffrey A. Spencer

Ohio Oil and Gas (Images of America: Ohio)
A full 45 years before 1859 Colonel Drake oil well in Pennsylvania, oil was produced and marketed in southeast Ohio. In 1885, the Lima Oil field was discovered and several attempts to close Lima's "Solar Refinery" failed. Lima is again the center of oil considerations in Ohio.
Buy Now

Discovered in the mid-1880s, from 1886 to 1905, the Lima Oil Field was the top producer of oil globally, according to Remarkable Ohio.

John D. Rockefeller invested heavily in the Lima crude oil through his Standard Oil, which was broken up by national anti-trust legislation by 1911. Still, Lima crude oil traveled via pipeline to help light the Chicago World's Fair of 1893.

By the year 2000, Ohio had a total of 62,000 active oil wells and by the early 2010s, the large private companies had invested $3.25 billion in additional wells and refineries for Eastern Ohio in the general vicinity of Zanesville.

In 2014, private companies and the state and local governments began to look at Lima and the rest of Northwest Ohio as a field for developing additional oil and gas properties.

Energy, including oil, natural gas, and wind farms, and Healthcare are the primary large industries in Lima today. The city is also home to the Procter and Gamble Tide and Downy factory.

The American railway system became important in the transport of oil in Lima and Northwestern Ohio. Lima Locomotive Works was a company that manufactured locomotives (train engines) from about 1870 during the Reconstruction Era through the 1950s, post-WWII. The company's engines transported materials, locally made tanks and power shovels, and people for the Armed Forces as well as oil during WWI and WWII.

The Lima Locomotive Works and later, Lima-Hamilton ceased business with the decline of the railroad and rise of the automobile. Company records are protected in the California State Railroad Museum and some of its locomotives are housed in various museums around the United States.

Western Ohio is famous for its activist Native Americans. Such groups at the United Remnant Band are attempting to purchase back lands around Yellow Springs, near Dayton, and surrounding counties, all of which they were forced to give up by the State of Ohio long ago.

One family in this group of remnant Native Americans is an Algonquian and a preacher who formerly appeared at every Ohio State Fair. There, he wore the regalia and face painting of a Storyteller and told stories of Ohio history in the years before settlers entered the Northwest Territory. Today, he and his son operate a living history facility that is part ranch and part museum and they travel to give performances as both settlers and natives in Western Ohio.

Shawnee Nation, which is Algonquian, was one native group in Western and Northwestern Ohio that was forced to leave Ohio altogether and settle in Kansas. Part of their former homelands became Allen County and its country seat, Lima.

Reservations included Wapakoneta, today a city and home to the Neil Armstrong Aerospace Museum, Hog Creek at the Ottawa River near Lima, and Lewistown. The first two reservations disbanded when overrun by settlers and retreated to the State of Kansas. The last group migrated to Oklahoma with many other native peoples.

Some of the most famous Ohio Shawnee people are Tecumseh, Chief Corn Stalk, and Blue Jacket. Every year, an outdoor play based on the life of Tecumseh is produced in Ohio. For several years, Central Ohio's TV Channel 4's Chief Meteorologist Jym Ganahl played the title part.

See more at One State, Many Nations.

Although there is no Shawnee College, but Shawnee High School in Lima is named for the Shawnee people who once lived on the Hog Creek Reservation and finally moved to Kansas.

University of Northwestern Ohio is found at 1441 N Cable Road; Lima OH. Its College of Applied Technologies has a division of High Performance Motorsports. Since the job of Automotive Technician is increasing in several large metro areas around the USA, this college is a good on to explore for help in gaining a well-paying job after graduation.

The Lincoln Highway, US Route 30 - Like The National Road (US Route 40), this highway runs east and west through the United States. Its terminal points are Tome Square in New York and Lincoln Park in San Francisco. Status of Abraham Lincoln are placed at some points along the route.

In Delphos, near Lima, you can see the Miami-Erie Canal Museum and part of an actual canal. The Post Office Museum is also located there and is one of very few museums dedicated to the mail services. In Van Wert is a well known library inside a castle.

Some people have reported seeing ghosts along US Route 30 in Ohio. While it was not a ghost, I seemed to have been followed by a UFO a few miles north of there one night.

US Route 30 Through Lima OH 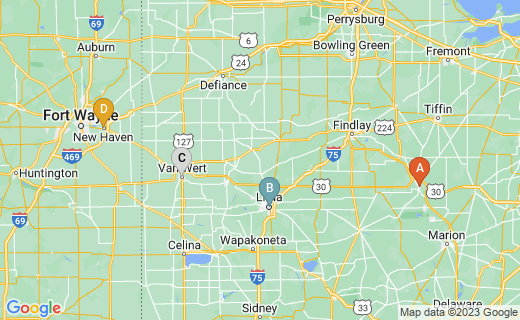 Kewpee Burger Downtown is a Lima establishment that local residents have loved since it opened in 1923 beside a tall savings and loan building. The only hamburger chain older is White Castle, which opened its first place in 1921.

Wendy's founder, the late Dave Thomas, grew up in Michigan and enjoyed Kewpee burgers as a boy. They inspired him as an adult without a high school diploma to open Wendy's Hamburgers in Columbus, Ohio in 1969. The chain expanded quickly and in the 2010s, many Wendy's places are located in the same spot as a Tim Horton;s coffee shop.

Kewpee's was first connected to the Kewpee Hotels, but broke away. They receive fresh, locally raised beef every day in their three Lima locations and their shops in other cities - Racine, Wisconsin and Lansing, Michigan. The Kewpee's in other parts of Michigan became Halo Burgers and I visit them to have an Olive Burger every time I see my Michigan friends. 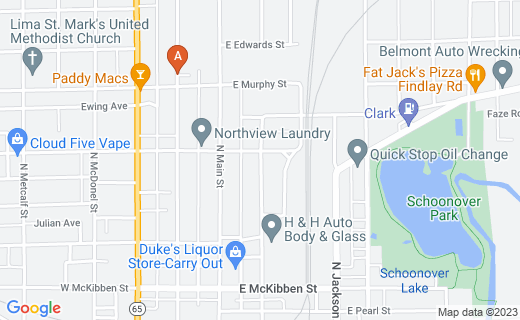 The Schoonover Observatory stands in Schoonover Park and opens to the public on the first Friday of every month, but all Friday evenings during the summer season.. Everyone may come and look through the 14-inch Celestron telescope. Lima Astronomical Society; 670 N. Jefferson Street; Lima, Ohio 45801.

The park also has a connection to the Ottawa River Bikeway, picnicking, and recreation areas.

Photos of Some Lima Attractions