Irish Holocaust Memorials Around the World: Ireland & No. Ireland

The 150th Anniversary of "An Gorta Mor"

1995 marked the 150th Anniversary of "The Great Hunger". This prompted Irish communities throughout the world to commission memorials to be built in honor of those that died, those that fled and their descendents.

The Great Hunger caused mass emigration from Ireland. It is said over 1 million Irish fled their beloved homeland on ships bound for America, Australia, Canada, England & Wales and Scotland.

This hub features Irish Memorials located in Ireland and No. Ireland.

Wrong by any name.

The Irish Holocaust* is known by many names including The Irish Genocide, The Great Hunger, The Great Famine and The Potato Famine. It all depends on who you ask and which truth you believe.

From 1846 to 1852 the Potato Blight or "Phytophthora infestans" in Ireland was blamed for millions of Irish deaths and was the cause of over a million more Irish leaving Ireland.

The Potato Blight was first recorded in the United States, in Philadelphia and New York City in early 1843. Winds then spread the spores, and in 1845 it was found from Illinois to Nova Scotia, and from Virginia to Ontario. It crossed the Atlantic Ocean with a shipment of seed potatoes for Belgian farmers in 1845.

You may wonder how could so many people die from the lack of a potato? They didn't, they died from lack of food. Although their diet was mainly potato other types of food were grown throughout Ireland and readily available from 1846 to 1852. Unfortunately none of it was given to the starving Irish, instead it was taken from farmers, at gunpoint, by the British Military. Ships carrying butter, vegetables, grains, livestock, whiskey and other provisions were regularly exported to England during the "Great Famine" as England likes to call it.

The Departure by Rowan Gillespie

On St. Patrick's Day 1846, the 'Perseverance', one of the first voyages of the Famine, period sailed from Custom House Quay, Dublin. Captain William Scott, age 74, a veteran of the sea, gave up his office job in New Brunswick to take the ship to New York. The Steerage fare was $4.50 (£3) and 210 passengers made the historic journey landing in New York on May 18, 1846. All passengers and crew survived.

In honor of the 150th Anniversary of The Great Hunger, Norma Smurfit commissioned a memorial and presented it to the City of Dublin in 1997. The bronze sculptures were designed and crafted by Dublin sculptor Rowan Gillespie and are located on Custom House Quay in Dublin's Docklands. The sculptures are a commemorative work dedicated to those Irish people forced to emigrate during the Irish Hunger years. It depicts sculptures of starving, weary Irish making their way to the "Coffin Ships" for transportation to foreign lands.

In June 2007, a second series of famine sculptures by Rowan Gillespie, were unveiled by Mary McAleese, President of Ireland, on the quayside in Toronto's Ireland Park to remember "The Arrival" of these refugees in Canada.

"The Famine" is a sculpture done by Edward Delaney in 1967. It is located at the corner of St. Stephen's Green in Dublin.

The plaque reads: "In memory of the large unknown number of people buried here 1842 - 1903. May they rest in peace"

This was the first memorial in Ireland to honor those who suffered and were lost during the Great Famine. It is erected on the grounds of an abandoned workhouse where an estimated 20,000 Irish died and a mass graveyard for children who perished and were buried without coffins. It was dedicated on August 20, 1995, the 150th anniversary of the tragedy.

The monument was designed by an artist from Co Kerry and depicts an account found in the Minutes of the Meetings of the Boards of Guardians for Ennistymon Union held in the County Archives. The account centered on a note that was pinned to the torn shirt of a barefoot orphan boy who was left at the workhouse door on the freezing cold morning of February 25, 1848.

"Gentlemen, There is a little boy named Michael Rice of Lahinch aged about 4 years. He is an orphan, his father having died last year and his mother has expired on last Wednesday night, who is now about to be buried without a coffin!! Unless ye make some provision for such. The child in question is now at the Workhouse Gate expecting to be admitted, if not it will starve. -- Rob S. Constable''

One side of the memorial depicts a child standing before the workhouse door, while across from that is the head of an anguished mother and two hands clenched in frustration or anger above the sorrowful text of the pleading note.

This large, cast iron, pot was used to make soup for starving families during the Great Irish Hunger, 1847-51. It was provided by a resident of Coolmountain House, a few miles away in this parish. It was discovered this century, by the local historical society, in use as an outdoor hot-tub. It was donated to the Society, a plinth and shelter was erected in Ballingeary where it is on display.

The town of Skibbereen is the most southerly town in Ireland and is the site of the Famine Burial Pits at Abbeystrowery. It was one of the hardest his areas of The Great Hunger and it has been estimated that between 8,000 and 10,000 victims of were buried at this site. For that reason it was selected as the focal point for Ireland's first National Famine Memorial Day on May 17, 2009.

Lios Na Binne
Under the ditch enclosing this field or a nearby one to the south lie the remains of Lisnabinnia starvelings of 1845-1850. The villages of Parkgarve, Lisnabinnia and most of the rest of Ballyglass's homes were erased by genocidists including Britain's 49th and 68th Reg'ts (regiments) who removed the local livestock, grain, and meal. Only now is this truthful memorial permitted. May it be emulated at the hundreds of other Holocaust mass graves to commemorate the 5.2 million murdered Martyrs and the other million who successfully fled.

We were Lisnabinnia
In this field, northward, our bones lie, discarded
Our Crops Distrained
Our Persons Defamed
Our Corpses Profaned
Our Souls Disdained
We await Judgement Day

At right is what is known as "Famine road" and is located above Killary Harbor. The road is overgrown now but you can still see the retaining walls built by starving locals during the famine. The road wasn't needed at the time but English landowners would only feed the locals if they worked on the road. If they didn't they weren't fed.

Doagh Visitor Centre and Famine Museum located in Doagh Island, Inishowen, County Donegal, Ireland, has exhibits and memorial on the effects of the famine in Inishowen, Donegal.

The Doagh Famine Village offers a large selection of life size attractions portraying life in Ireland from the 1840s until the present day. The attraction is built around and includes original thatched dwellings which were still inhabited by the owner's family up until 1983.

Locations of Memorials Listed Above 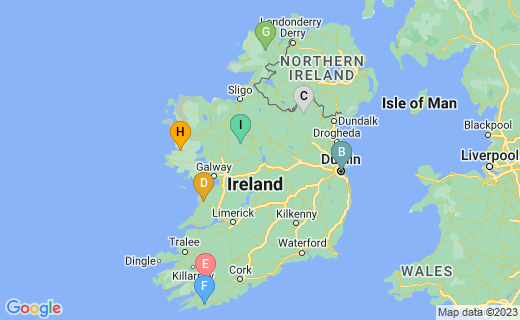 Location of Memorials Listed Below 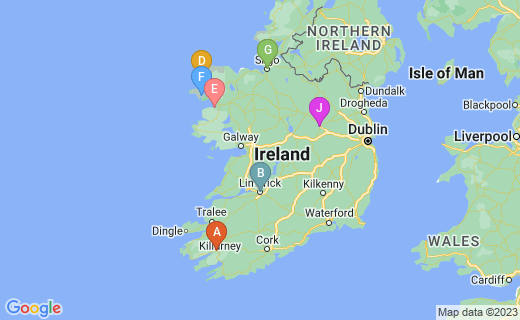 I thirst beside the heather-laden bogs –
no samaritan for me;
no one here to see
that I shall die amidst the
plenty, in the field –
and that its yield
will sail to shores beyond the sea.

How can it be
that flocks of sheep can find their fill
while I lie empty and in pain?
or is it vain
to beg attention to my plight?

How can I fight
when I am listless, drained alone,
shrunken to the bone
while others eat what I have
grown in toil?

Woman of the soil –
I fade against a wall of human greed
and - sower of the seed –
I languish as it grows...

The 'Broken Heart' Famine Memorial Fountain was created by Maria Pizzuti in 1997 and is located on Lower Mallow Street in Limerick City. The sculpture is in memory of the forced emigration of several thousands who fled to America and beyond from nearby Steamboat Quay.

The Doolough Tragedy Memorial commemorates famine victims who walked from Louisburgh along the mountain road to Delphi Lodge to seek relief from the Poor Board who were meeting there. After their request was refused they walked back and many of them died.

The National Famine Memorial is situated in Murrisk, County Mayo, close to the Croagh Patrick Visitor Center and commemorates the anniversary of the Irish Famine 150 years ago. The sculpture by John Behan depicts a 'Coffin Ship' with refugees as dead souls hanging from the sides.

Are you of Irish Descent?

The Kildavnet Tower, locally known as Grace O'Malley Castle, served as a Catholic Chapel in the 19th Century. Part of the structure dates back to the 12th Century. Next to the chapel is the ancient graveyard of Kildavnet which contains many unmarked graves of famine victims from 1845 to 1848. You can view several photos of the Tower or view a picture of the cemetery.

Sligo Harbor is the site of a Famine Memorial erected on the 150th anniversary of The Great Hunger. The bronze statue is of a family comforting each other with the child pointing toward the new land where a ship will take them.

In the background, a plaque displays a 'Letter to America, January 2, 1850'. The author, Owen Larkin, did not know that his son was already dead when he wrote the letter.

I am now I may say alone in the world all my brothers and sisters are dead and children but yourself... We are all ejected out of Mr. Enright's ground the times was so bad and all Ireland in such a state of poverty that no person could pay rent. My only hope now rests with you, as I am without one shilling and as I said before I must either beg or go to the poorhouse... I remain your affectionate father Owen Larkin be sure answer this by return of post.

More than 2000 famine victims were buried at the Famine Graveyard of St. John's Hospital in Sligo. The bronze and stone sculpture called Faoin Sceach (pronounced Freen Skack, meaning "Under the Hawthorn") was erected in 1997 by the County Sligo Famine Commemoration Committee. The sculptor, Fred Conlon chose a bush as a memorial for the famine dead. In rural Ireland this bush was regarded as a sacred object. No farmer would cut it down because they believed it would upset the spirits. During the famine many starving people lay down under it to die or were buried there.

The plaque beside the statue reads:

May they feel the warmth of a tear!
May they hear the piper's lament,
May they know we, the survivors, keep vigil.

Near "The Faoin Sceach" sculpture a narrow path leads to the Children's Burial Ground. The ground is marked with a circle of stone and Celtic Cross mosaic also made of stone.

The Starvation Memorial Fountain was dedicated in 1997 and is located at Dominick Place in Mullingar, Co. Westmeath. The water flows from the top, down through three sets of hands into the mill wheel.

This sculpture commemorates the famine and its effects in the zone. The mill wheel ties the sculpture to Mullingar by the legend of St Colman. The hands are the hands of thousands.