What is the Dead Yard?

A very traditional Jamaican culture or Jamaican custom is the Dead Yard. It is a little piece of Jamaican history and is very much a part of the Jamaican people.

When someone passes away in Jamaica, the entire community supports the family. One does not have to know the person who dies to lend support. Support comes from friends of friends and friends of family; even non affiliated persons from the community or neighboring communities give their support. Giving this support in time of grief has become a Jamaican culture.

What is this support I keep talking about? The night of the day or the first night after the passing away, is the start of the dead yard. The dead yard is not only a place but an event that last for the period commencing on the day the person dies to the night before the funeral.

The first night of the dead yard at the home of the deceased, a gathering of supporters come to show their sorrow and comfort the family. A game of dominoes and a few flasks or rum might mark the commencement of the night's ritual.

Usually the game of dominoes and drinking of rum escalates into playing of music and eventually the main event, Kumina.

Drumming, primarily an African tradition or African custom which slaves used to communicate with each other from plantation to plantation, is now a big part of the Jamaican culture. Playing of drums dated back to the early 1300 in Africa. In Jamaica the slaves who could not to see each other to talk, used the drums to send messages and news. The Plantation owners thought they were having their own kind of fun. When slavery became less conformed drumming was allowed for African celebrations.

Post slavery drumming for weddings and childbirth gave way to the announcement of the passing of a loved one. Thus the birth of Kumina, the music of the dead.

Over ninety percent of all deceased in the island of Jamaica have a Kumina band during the period between the passing and burial to play the drums.

Playing the drums is not a simple who wants to play or just hitting to find rhythm. Nearly all Kumina drummers are of Maroon decent. There has to be something in the bood, a calling from the ancestors. Kumina playing is a gift from the spirits, not just anyone can touch the drums.

During the dead yard, the ground where the drummers play has to be prepared spiritually, by sprinkling of white rum, or the blood of a white fowl (chicken) or the blood of a goat. This part of the Jamaican culture can be a bit scary but seen as necessary for the spirits.

Kumina at a Dead Yard - Jamaica

Another part of this Jamaican culture for the dead yard is using the Duppy Band which is the alternative to the Kumina. There are some Jamaicans who are scared of the Kumina or they are Christians who want to keep away from the Paganism that Kumina portray so they use the Duppy Band instead . The Duppy Band consists of a guitarist, drummer, keyboard, maracas, tamberines and the lead singer. The sound is quite like the Kumina except for the other instruments in the band, like the guitar and keyboard.

Duppy in Jamaica means 'ghost' or 'dead'.Duppy Band means Dead people Band or a Band that plays music for the dead.

The Sound of the Duppy Band 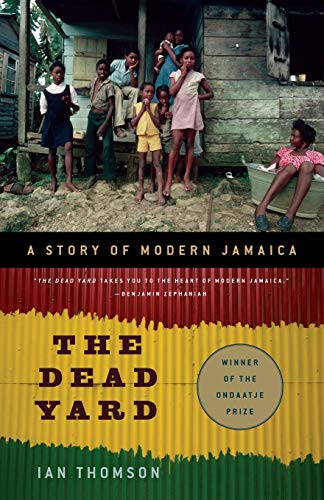 The Dead Yard: A Story of Modern Jamaica
Buy Now

The Nine Night simply means the Ninth Night of the dead. Counting from the first night after the person dies to nine nights hence. The person is usually buried the day after.

Traditionally, the dead needed to rest for at least nine days and nights in order for their spirits to pass. Such superstition has developed into a practice not to bury the dead until he rises on the third day, grieves for himself and takes whatever possessions he wishes to have in the afterlife during the other six days.

It is very rare that any dead in the Island is buried earlier than the nine days.

Due to the economic conditions during recent times the dead is sometimes buried after longer periods. In this case the Nine Night is pushed back to the night before the Funeral.

The final night of the Dead Yard is the highlight of the period. Sometimes both Duppy Bands and Kumina are used.

During the early hours of the night the Church members nearby are invited for a Prayer Meeting. Songs are sung and prayers offered up for the grieving family. This usually last for 2-3 hours.

Lots of liquor and food is served or sold at a Dead Yard and mostly on the Ninth Night.

The end of the Nine Night will see dawn and a lot of drunks.

Not only did people from all around gathered to listen and dance to the very addictive sounds of the Drums or the Band but they also gather for the food that they knew would be served free of cost.

Traditionally it was fried fish and fried dumplings or slices of bread and a good cup of hot chocolate made from freshly parched chocolates. The cocoa is picked and the seeds removed and put to dry in the sun for a couple of days. The cocoa is then parched in hot stones or in a large kettle. The roasted seeds are then pounded in a large Mortar and Pestle and rolled into balls. When the balls are dry they are grated to make the hot chocolate. Coconut milk, sugar and nutmegs are used to flavor this drink.

For the strong of heart a good mug of freshly made coffee was preferred. The coffee would be locally grown by a farmer, friend or family. The beans would be put in the sun to dry for a couple of days then roasted in a large kettle then ground to a powder. The difference between the cocoa and coffee is the cocoa has quite a lot of fat so it gets pasty when pounded.

The Jamaican made rum, J. Wray & Nephew White Overproof Rum, is and has always been the primary spirit of choice. This is drunk with a little water or for the more adventurous, some ice cubes with Pepsi or Coco-cola.

The modern generation has their own ideas about what the dead yard should be about and it has become a reason to meet and have fun. I have been invited on a date to the Dead Yard a couple of times.

The food has changed somewhat to sandwiches made of corned beef, tuna or cheese. A cup of soup made from goat meat, chicken, chciken feet or fish might be offered, depending on the family's preferences.

There is no chocolate or coffee, but juice instead. The rum might be free but all other liquor is now sold for profit. The younger patrons prefer guinness stout, beer, tonic wines, redbull, and the other energy drinks on the market.

The dead yard is a vital part of the Jamaican culture. You don't have to use a kumina or duppy bands to have a dead yard. You can gather and play reggae or gospel music so long as you have some sort of gathering. The dead yard is an event that you must experience.