A Visit to Jameson Museum in Dublin Ireland

The Jameson Visitor Center in Dublin

One of the best places to visit in Dublin Ireland is the Jameson Visitor Center. It opened in November 1997. It costs €13 for an adult to take the tour of the museum in Bow Street Dublin. The centre is open seven days a week all year round except for Christmas week.

The price includes a guided tour of the Distillery and a whiskey in the Jameson Bar.The tour will take approximately one hour. You can book your tickets in advance online or when you arrive. There is a restaurant and a gift shop and the famous Jameson Bar where you can relax for a few hours.

At the end of the guided tour there is a chance to go to the Irish Bar and receive a free glass of Jameson Whiskey. Then if you would like to be one of the volunteers you can taste Jameson against Scottish and American whiskey.

Visitors can also book a night out at the Jameson Centre. This is called the 'Shindig Evening’. These are held on Thursday, Friday and Saturday every week during the tourist season of April to October. It cost €60 but is well worth it. The visitor gets a very good four course Irish meal and of course a free Irish whiskey. Visitors are entertained by the Irish music of The Shindig Players. There is also Irish dancing from the Claddagh Irish Dancers. Also included in the price for the evening is a tour of the Jameson Distillery.

If you book online you will get a further discount.

A few yards from the Jameson Center is the Chimney Viewing Tower and this is well worth a visit too. It was originally used to distill the Jameson Whiskey from the distillery in Bow Street. It was built in 1895 and is 170 foot or 60 metres.

When refurbishment of Smithfield Square got under way in 1997 it was decided to preserve the Chimney. The Viewing Tower was constructed incorporating the chimney. Now it has 360 degree panoramic views across the city where visitors can reach the top and look out across Dublin.

The Visitor is Brought to the Top of the Chimney Viewing Tower by a Glass Lift. With the platform included this gives the visitor a height of 185 feet to the top. At the top there is a viewing tower on two levels surrounded by glass where there is a 360 degree view of Dublin City. There is a spiral staircase with 257 steps that will also bring you to the top if you have a fear of lifts or if you just want to take the alternative route. 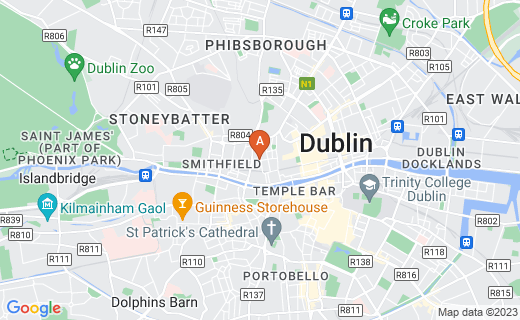 Open 7 Days all Year Round

It only closes on Christmas Day and 26th December.

Nearly all the Irish whiskey sold in Ireland is produced here today. The new distillery in 1966 was built beside the old one and this is now also a visitor’s centre. If you are not visiting Dublin but would still like to visit A Jameson Distillery then there is the opportunity to visit this centre in Cork. There too you can take a tour to see how the Jameson Irish whiskey was made all those years ago and is still made today.

John Jameson went to Ireland and started his own whiskey distillery in Bow Street, Dublin in 1780. ‘Without Fear’; (‘Sine Metu’) is the Jameson family motto.

He had a passion for his whiskey and spent years making sure it was the best. It was so popular in Ireland and the world because John Jameson decided he could get a smoother flavour by distilling the whiskey three times rather that the normal twice.

This created a distinctive taste that was so much nicer and unique than other whiskeys. He bought the best ingredients and equipment from suppliers in order to make this venture in making the finest whiskey a success.

In 1966 John Jameson, Cork Distillers Company and John Powers merged to form one company called Irish Distillers Group. All production was transferred to Cork when the Middleton Distillery was built. 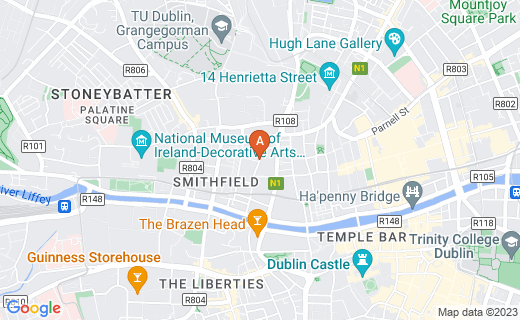 It is only 10 mins walk from O'Connell Street in Dublin. The tour is very interesting and the price is also reasonable. Or you can book for a night out at the Visitors Center where you can listen to Irish music and watch Irish dancing as you enjoy a great four course meal. So if you are in Dublin Ireland on holidays why not visit the Jameson Center.

Only ten minutes walk from Smithfield and Bow Street is the Arbour Hill Memorial Park in Dublin 7. This is well worth a visit for those interested in Irish history. It is also free. This used to be the Arbour Hill Prison Yard in 1916. There was an uprising in Dublin when Irish soldiers took over parts of Dublin.

They were fighting to free Ireland from British Rule. But the Irish soldiers surrendered on 28th April 1916. Fourteen of the sixteen men who were executed after the surrender are buried here. Their bodies were all dumped in this mass grave and covered in quick lime. This made it impossible for their relatives to later claim their bodies for reburial. In 1955 the Irish Government erected a fitting memorial to these men at the Arbour HillMemorial Park in Dublin 7.