This hub is the first part of the expansion of my ultimate dream vacation in Jammu & Kashmir. Jammu City is the “City of Temples” that anchors a big set of Hindu temples and shrines in the higher altitudes. With hills and valleys, Jammu’s panorama is beautiful with the incessant blessings of Gods residing here. The famous ‘Vaishnom Devi Mandir’ is situated in this heavenly place that gets visited by enormous devotees each year. The terrain of Jammu is formed by The Pir Panjal Range, the Trikuta Hills and the low-lying Tawi River basin. The Pir Panjal range separates Jammu from the Kashmir valley. The majority of people of Jammu are called Dogras and they speak the Dogri language.

Perched on the hills of Vaishno Devi, this temple is dedicated to Shakti or Mata, the Mother Goddess. This shrine is near the town of Katra, which is visited by millions of pilgrims each year. It is said that Maa Vaishno Devi was an ardent devotee of Lord Rama and she had the fortune of having his darshan when she was in her meditation. So Mata Vaishnavi temple is flocked with pilgrims from different parts of the world. A narrow small opening in the steep hills takes the devotees to this cave temple after trekking through ice-cold waters.

This hill station in the Shiwalik belt of the Himalayas is covered with snow during winter that provides several opportunities for snow games, especially skiing. Paragliding joyrides are also enjoyed in Patnitop. Surrounded by thick verdant forests, Chenab river stream, pine trees and breathtaking mountainous views, Patnitop is a surreal hill station in Jammu.

This mountainous town also called as ‘Mini Kashmir’ is situated in Doda district. Bhaderwah is famous for its natural beauty that is potentially very high. Also, Bhaderwah fort stands as a testimony for its historic and religious prominence.

Near Reasi on a hillock, this fort is situated that was once used by royal families for taking shelter during emergencies. The fort has a temple, a pond, several rooms, armory and treasury. Though ravaged by earthquakes and negligence, Bhimgarh fort still stands as a historic landmark near Reasi.

Ramnagar is a historical small town in Udhampur district named after its last ruler King RamSingh. He was a brave Dogra king and his fort is still preserved that stands proud. The ‘sheesh mahal’ complex inside the palace has walls decorated with fine glass work arranged in designs. The darbar hall has paintings of murals depicting scenes from the epics Ramayana, Mahabharata and the battlefields.

The fort has a temple built within its precincts, whose presiding deity is Kali, the goddess of Jammu. The temple is known locally as ‘Bave Wali Mata temple’. The forest surrounding this fort is manicured into a well laid out park designed in the form of Mughal gardens. A sizable view of Jammu city can be obtained from this garden that attracts a lot of visitors.

Situated in the heart of Jammu city, this shiny temple consists of seven shrines each with its own Shikhara, one of the unique, largest temple complexes in North India. Lord Rama is being worshipped here, together with the deities of Gods associated with Ramayana.

In Reasi district, there are a number of shrines including Mata Vaishno Devi, Merhada Mata, Baba Dhansar and Siad Baba. Shivkhori cave is one of them with a ‘lingum’ believed to be self-formed. It is located in the village Ransoo. The cave abounds with a number of other natural objects having resemblance with Goddess Parvati, Ganesha and Nandigan. Visited by lakhs of devotees annually, this naturally formed cave is believed to have super powers.

Goddess Durga is the presiding deity here, popularly known as Machel Mata. ‘Chaddi Yatra’ takes place in the month of August when thousands of devotees visit the temple. This temple is in the village Machel surrounded by magnificent hills, glaciers and streams.

Besides being a tourist spot, Mansar Lake hosts several shrines in its banks. This beautiful lake with forest-fringed hills is a holy site, sharing the legend and sanctity of Lake Manasarovar. The shrines of Seshnag, Umapati Mahadev and Durga in its vicinity attract so many pilgrims over here. They take a holy dip in Mansar Lake during festive occasions.

These holy caves and shrines resemble the mountainous abodes of Gods. Lord Shiva stayed in ‘Kailasa’, so also ‘Shivkhori’ cave. Lord Vishnu stayed in river Palazhi (Ocean of milk) in the lap of Seshnag, here too Mansar Lake. All these facts won’t show any discrepancy in naming Jammu, ‘the City of Temples’. 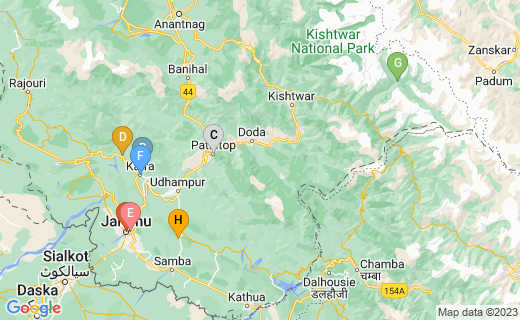