Japan revisited: traditions survive like memoirs of a geisha

Japan in the focus of the world's eye

The victim of a recent catastrophe, the explosion on Fukushima, Japan has attracted a lot of attention from all over the world lately. Rather than the technological progress that it has known since the middle of the 20th century, it is its traditional part that is in focus in this hub. Luckily for the Japanese, many cultural aspects and traditions have survived through the centuries and are still a great treat for the Japanese society and its visitors. Like, the geisha, for example. Or the tea house. Or the traditional Japanese theater.

Do you remember the beautiful episode from the movie “Memoirs of a Geisha”, the so called Snow dance? This dance is probably based on one from the famous Kabuki theater – a unique cultural survivor of the Japanese tradition! So if you are interested in this side of Japan, keep on reading...

Geisha - the famous artist of Japan

"We sell our skills, not our bodies. We create another secret world, a place only of beauty. The very word "geisha" means artist, and to be a geisha is to be judged as a moving work of art."
~Memoirs of a Geisha

The role of an artist in Japan is traditionally attributed to a special kind of a female social type – that of a geisha. Entertainer, actress, intellectual, musician, dancer, story-teller, servant at the tea ceremony, with a distinguished outfit style, the geisha enhances the Japanese tradition with wit, aestheticism, humor and the inner artistic beauty.

Still existing school of geishas in the city of Kyoto is the only one in Japan. Maiko, the students of geishas, give their performances in the local temples regularly, in the best traditions of the Japanese art. Maiko and Geiko are different levels of the hierarchy in the world of Geishas. Actually, it's like military ranks and they are distinguished by the color of the kimonos (and even the collars!), make-ups and hairstyles.

Maikos are known for their dancing. When they pass their exam to become a maiko, they have to dance. Here they dance a “Komachi Odori” dance, which means the dance of the beautiful girls. Ono-no Komachi is the name of a famous Japanese poet who lived around 825-900. She is said to be one of the most beautiful women of the epoch. Since then, her name also means a beautiful woman in Japanese.

The costumes of Maiko dancing are very special. They are rose, colored in the tones of a plum, called “shitagi”. Their kimono is worn on one side only – this manner of wearing is called “kata-sode”. Their hair is done with a violate bandage and two symmetrical silver pins decorated with the season flowers – bellflowers.

Kabuki theater in Japan appeared in the opposition to a more traditional Noh theater in the 16th century, and its name means “singing and dancing”. It was invented by a dancing priestess named Izumo-No Okuni. In 1599 she was sent from her temple to collect charity in Kyoto. However, instead of that, she started dancing and performing on the stage where the wandering artists usually performed. Later on, she founded her own artistic team that gave dance performances in Okuni Kabuki style. The picture shows girls in the costumes of miko – the temple servants. The dance is called “Kabuki-Odori” and is dedicated to Izumo-No Okuni. But Okuni Kabuki not only gave the start to the Kabuki theater. Izumo-No Okuni is considered by the modern geishas as the founder of their tradition. 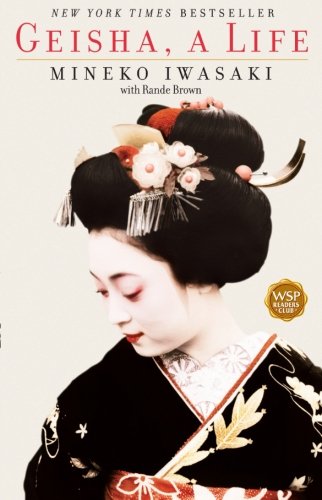