53 Years of Historic Homes and Buildings

The city of Jerome located north of Phoenix Arizona and south of Sedona, Arizona just completed their 49th Historic Home and Building tour making it Arizona's longest running home tour. Jerome is a America's most vertical city, it's streets are mostly narrow and winding, and their current population is 400 plus, which makes organizing a home tour challenging, but once again the event was very successful. Tour tickets are sold on line and at the Lawrence Memorial "Spook" Hall which was formerly a J.C. Penney's in 1937 and is now Jerome's community center. Spook Hall because Jerome was almost a ghost town down in population to around 50 after the mining closed, is used frequently for art shows, social events and town meetings. Vans from various schools and civic organizations ferry home tour visitors from stop to stop. Entertainment by the Mingus Mountain high school singers provided great entertainment while waiting for the tour to begin. The best time to attend is early morning as the number of vans is limited and it may be a 20 minute to an hour wait before starting the tour.

The Rooming House, built in 1898, is now a single family residence, but in 1910 when Jerome's mines were producing copper, and some gold the three floor Rooming House served miners needing beds. Often the same bed was shared by 2 or three different men working different shifts. Toilets were outhouses and there wasn't any facilities for bathing or cooking. The current owners have an internal and external stairwell and an impressive amount of antiques.

The Porter/Farwell home was built in 1916 and Mr Porter was once the mayor of Jerome. The home commands fantastic views of the Verde Valley, but requires a walk upward of 30 plus steps. This is the time to say that the Jerome Home Tour is NOT handicapped accessible. The Farwells are the current owners and the home is filled with their books and interesting collections. Mrs Farwell is a mosaic artist with a fondness for birds. 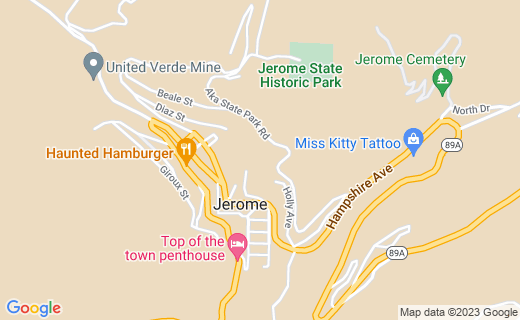 The John Riordan Home is a testament to persistent creativity or insanity and it would be hard to decide which. The house was built by the United Verde Copper Company for mining executives. The house is named for "Honest" John Riordan a safety director for the mine from 1902 until 1953. Thank goodness no one was at home on July 8, 1953, when a culvert above the home broke and sent tons of mud and rock into the home. The pictures of the home show only a shell of boards left standing in a "sea" of debris. After 59 years the remains of the home was purchased and lovingly restored to the beautiful vacation rental home that it is today.

We spent the most time on the tour visiting and asking questions with the father of the contractor and owner of the home. The only really unanswered question was what prompted the contractor to restore a mud slide wreck.

We walked to the Asylum restaurant located in the Jerome Grand Hotel, formerly the United Verde Mine Hospital. The views to the front of the restaurant are like those from an airplane and the lunch was quite tasty

Details of the porch on the John Riordan Home

A Visit to Jerome Arizona

Have you ever visited Jerome Arizona?

Tiny Yards and Gardens in Jerome

The Haven United Methodist Church was built in 1927 and remains a small but vital congregation today. The church is blessed with beautiful stained glass windows created by local artists. While the congregation membership is only 44, their Pastor told us that most every Sunday, they have visitors for the service.

The remainder of the tour included a tiny rustic Miner's Shack that was built by a bootlegger before making his exit to South America for two years, and two modern homes with interesting details.

The home tour does not repeat homes or buildings for five or more years.and this year (2018) will feature the Katie Lee home. For an amazing account of the early history of Jerome, check out Herbert V Young's Ghosts of Cleopatra Hill, Men and Legends of Old Jerome. (Very readable with great photos.) Also there is a Jerome Home Tour website.