HIking Through a Hawaiian Volcano Crater

I'm not very adventurous by nature. In fact, caution is my middle name when it comes to going on vacation - especially with respect to cuisine or outdoor activities.

Yet, when we visited the big island of Hawaii recently, we hiked right through the crater of a volcano! I have to admit that it was a little hair-raising, even for someone who enjoys hiking.

Our 4-mile hike took us around the rim of Kilauea Iki, through lava tubes (did I mention I have claustrophobia too), down across the crater floor, across towards the Halemaumau crater, which was spewing steam the entire time. We didn't get to walk as close to the crater rim as we had planned because the sulfur dioxide levels were dangerously high. Portions of the trail were closed off to visitors and warnings were aired on the radio station.

Over several hours we walked through rainforests, past a cinder cone, down 400 feet into the Kilauea Iki crater (which last erupted in 1959), and then climbed back up to the crater's rim. The terrain was steep and rocky at times, and it was hot! All I kept thinking while walking the 1.5 miles across the bottom crater was, "hot lava!"

Yet, hiking in the Hawaii Volcanoes National Park, was cool in every sense of the word. You don't have to follow our trail - there are over 150 miles of trails throughout the park. Bring a backpack, water and sturdy shoes and go exploring in Hawaii.

All photographs in this hub are the property of Stephanie Hicks. Please contact me for permission to use.

Kilauea is the Most Active Volcano in Hawaii

If you are planning a trip to the Big Island of Hawaii, you must visit Kilauea. Whether you are staying in Kona or Hilo, its less than 2 hours away via car. For only a $10 entry fee (per vehicle) to the Park, you have nature's mystery and marvel literally at your feet.

For years, when you said "Hawaiian volcano," people thought of Mauna Loa. Yet, Kilauea is a separate volcano that is much younger and more active than its northwestern neighbor. While native people refer only to the summit caldera as Kilauea, geologists include the entire volcano within the appellation.

Since 1952, Kilauea has erupted 34 times. Starting in 1983, the Kilauea volcano has been continuously spewing lava from its cone, running down 11 km (about 22 miles) to the ocean. Its a dramatic sight, especially at night. Its one of the world's most active volcanoes.

The Hawaii Volcanoes National Park was established in 1916 (43 years before the massive eruption of Kilauea Iki). Visitors to the 230,000 acre park can witness the continuous birth of the island, which is the result of over 70 million years of volcanic activity. The National Park is recognized as an International Biosphere Reserve and a World Heritage Site.

The crater floor across which we hiked was a bubbling lake of molten lava just 50 years ago! In November 1959, Kilauea Iki erupted with impressive force. Fountains of lava reached 1900 feet into the air and, at its peak, the volcano was spewing 2 million tons of lava per hour.

When the lava cooled and hardened, the resulting Ka'u Desert continues to show signs of the recent eruption. Walking 1 mile across the crater floor, steam vents remind you that you are in an active volcano. The Devastation Trail takes you through what used to be a rain forest, but was wiped out by cinder and pumice in 1959. And, off in the distance, steam billows from the mouth of the Halemaumau crater, while lava flows continuously towards the ocean.

Knowing all that... would YOU hike through the bottom of an active volcano crater? Our Hike Around Kilauea Caldera and through Kilauea Iki's Crater

Our day hike started at the Kilauea Visitor Center. Although there are guided tours and hikes, we picked up a map and planned our own adventure.

Leaving the Center, we hiked south along well-marked trails for about 1 mile until we reached the Thurston Lava Tube. Despite my claustrophobia, we did the 15-minute loop through thick rain forests and into the large, cavernous formation. Whew!

After a quick sip of water, we headed across the street to the trail that takes you down to the Kilauea Iki crater. It is a steep switch back trail (we slipped and slid a few times), and about 1/2 mile to reach the crater floor. If you have bad knees or a bad back - don't even try!

When you get to the bottom, you might have to steel yourself for the 1 mile walk across the crater. I literally had images of the lava engulfing us as we started across the dusty trail. Despite the massive devastation in 1959, signs of life emerge as little ohi’a trees with bright red pom pom flowers dotted the trail (see photos above, right). Still, steam continues to flow from small cracks in the crater's floor.

After about 20 minutes, you wonder when you'll get across. That's when you reach the fallout area of the eruption. The lava is uplifted into jagged formations and you have to start scrambling over a field of lava rocks (see the photo gallery below). Be extra careful here - we lost the trail and found ourselves having to circle back over some pretty big rocks. Its a broken leg or sprained ankle waiting to happen. As you grip the lava rocks, watch the edges. They can be sharp!

After about 40-50 minutes walking across the crater floor, you reach the opposite side. You'll literally be climbing a stair case out of Kilauea Iki's crater, up 1.5 miles to the overlook. Switch backs through the rain forest can be tiring, but the beautiful, lush vegetation stands in stark contrast to the desert crater you just crossed. Several spots along the trail allow you to marvel at the crater below. The End of the Trail in Kilauea, Hawaii

When we reached the Kilauea Visitor Center again, we had been hiking about 4 hours. We were definitely tired and thirsty and ready for some lunch.

Food service is available at the Visitor Center, as well as a gift shop - everything from maps to sweatshirts to post cards. We chose to go for a drive back towards Kona, where we were staying, to pick up some great road-side Hawaiian fruit for a treat.

Because the sulfur dioxide levels were so high during our visit in 2008, we were not able to return in the evening to watch the lava flow from the Halemaumau crater into the ocean. Roads and trails were closed off to the big show!

Would we return to hike through the Kilauea Iki crater? Most definitely! While a bit nerve-wracking, it is simply awe-inspiring to witness Mother Nature in her creative stage. Since the lava flows started in 1983, more than 550 acres of new land have been added to Hawaii's southeastern shore. The continuing eruption of Kilauea represents the longest rift activity in Hawaiian volcano history.

Its one hot spot you don't want to miss! 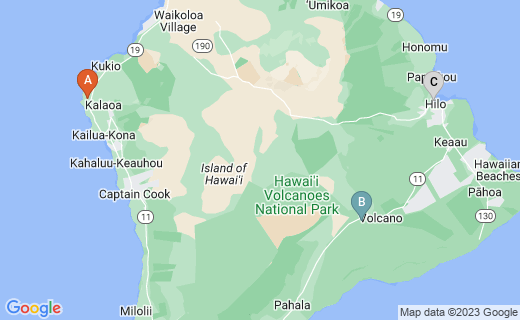 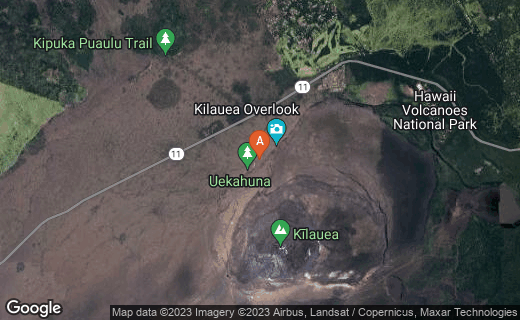 If You Go to Hike Kilauea, Hawaii

The Awesome Beauty of Kilauea