Located in the heart of Buena Park California, situated in the mature yet still blossoming job creation Mecca of North Orange County, is where you will find one of the most popular amusement parks in the entire Golden State. A tourists delight and visitors favorite called "Knott's Berry Farm". This regional gem which has been an enduring centerpiece of the municipality for nearly a century, is a medium sized entertainment venue that many consider a perfectly planned hybrid consisting of a traditional "Old West Theme", fused tightly together with cutting edge state of the art thrill ride technology. A technology that has been skillfully and meticulously forged into nine of the most exhilarating roller coasters this side of the mighty Mississippi. The only other theme park in California that has attained equal community stature and worldwide popularity based on quality of family experience, can be found a mere seven miles to the east via the 91 Freeway in the city of Anaheim. If you haven't guessed by now, or are unfamiliar with the region, the only other potential "Give In" would presumably be the "Mouse House". Yes, you are correct, Disneyland.

It is truly hard to believe "Knott's Berry Farm", this iconic theme park, which has evolved over nearly a century to become a structural cornerstone of the local Orange County economy that now employs thousands of full and part time local residents, was once a small neighborhood berry stand in the early 1920s. And shortly thereafter in 1928, expanded to include a quaint family owned and operated restaurant that started a long lasting tradition and legacy of serving mouthwatering down home country style chicken dinner specialties complete with complimentary side dishes, topped off with a nutritious basket of uniquely "Knott's" fresh picked boysenberrys, named after "John Boysen" the founder, or, generous slice of pie made from the same. At present, with decades of food preparation and fun filled days in the rear view mirror, it's virtually impossible to separate Buena Park or Orange County from this old west themed family fun park landmark. Unquestionably, a premiere example which illustrates how entrepreneurs such as the "Knott Family" can embark upon a massive food and entertainment focused business venture that ultimately creates thousands of jobs, while at the same time maintaining an open line of communication and impeccable working relationship with the people who live in the surrounding neighborhoods. A perfect recipe that paved the road for seamless integration of the two.

As a result of the acquisition by amusement and theme park focused limited partnership "Cedar Fair" in 1997, significant fundamental and aesthetic changes have been slowly implemented over the years in what seems to be a strategic effort to enhance the overall visitor experience by catering to a much broader demographic. What was once a multi acre venue that embodied a predominantly "Old West" theme and motif to reflect its humble beginnings which inherently appealed to, and attracted an older more refined generation, is now evolving into an equally shared experience designed to bridge a slight age gap. All time favorites such as the "Birdcage Theatre", an exact re-creation and or replica of the original gambling hall, saloon hybrid located in Tombstone Arizona, where lavish wild west period productions are conducted daily to give visitors a genuine feel for what "Live Stage" entertainment was like back in the pre modernization era of the 1800's, to a thunderous futuristic adrenaline pumping ride on your choice of undulating, swerving, gyrating, and gravity defying roller coasters, that will surely satisfy the ultimate thrill seeker.

The end result? A commercially successful entertainment balance appears to have been struck without compromising the underlying historical integrity, in which visitors from the entire spectrum can purchase a ticket and experience a diverse landscape of fun and adventure. After analyzing consistently increasing park attendance and related data, the general public seems to overwhelmingly approve of the structural and aesthetic changes made over the years. And let's not forget "Knott's Scary Farm's" annual fright fest known as "Halloween Haunt", in which the entire park is decked out in "Ghostly" settings each and every night during the month of October in celebration of this "Trick or Treat" tradition.

Knott's Berry Farm plays host to several full service "Sit Down" style restaurants in addition to a virtual smorgasbord of fast food and quick snack stands. Some of the more popular eateries include the centerpiece where it all started, "Mrs. Knott's Chicken Dinner Restaurant" which is located on the park grounds adjacent to Grand Ave. and right across the street is the famous chain franchise "Fridays", offering an alternative menu of lunches and dinners. For those who prefer a bottom less pit when dining, it might be worth a visit to the appropriately named "Claim Jumper" which is located off property, directly across the street from Knott's on the corner of Beach Blvd & La Palma Ave. All establishments are mainstays and each adds their own unique culinary touch to respective specialty menus.

It's certainly not "Magic Mountain" and definitely not "Disneyland", but a refreshing blend of both that has earned, and undoubtedly deserves, a ranking of straight "A's". After many years of casually documenting the sentiments of everyone I talk to who has experienced Knott's first hand, this seems to be the consensus. The park boasts an even balance of 12 pulse pumping "G" Force challenging roller coasters and thrill rides, 11 rides designed for the entire family, and a whole host of reserved, low velocity children's rides of which several have been named after the most popular "Peanuts" characters such as Charlie Brown & Snoopy. So in this department, Knott's provides asteemed guests with a well diversified experience designed to please all demographics regardless of age. I have yet to encounter any negative feedback in relation to entertainment value or overall ride "Experience".

Ticket prices are very reasonable in comparison to other theme parks. A family of four can gain admission for roughly one to two hundred dollars, which is certainly a bargain by any measure considering it pays for an entire day and night of quality family fun. Food prices are relatively inexpensive as well considering the venue, however, looking at it realistically, the overhead of operating a park owned restaurant or franchise in such a prime tourist location which is conducive to high visibility leading to robust walk in patronage, makes it nearly impossible for any entertainment venue of this magnitude and stature to provide quality dining as it does, at deep discount prices. Paying more for meals and snacks at a theme or amusement park unfortunately just comes with the territory.

Parking, which consists of three separate multi acre lots that nearly encompass the entire park, are conveniently located a short distance from the grounds for easy seamless access. The lot adjacent to Knott's Hotel offers the first three hours free, with additional charges applicable thereafter. The grounds are clean and nicely maintained by staff with some distinct areas kept in immaculate condition. The lush green palms and vibrant flora landscapes found throughout, compliment and blend perfectly with the overall theme to help define the atmosphere, and it's obvious to the casual visitor that all plants and trees are meticulously cared for and nurtured. Staff and employees who operate the park are friendly and courteous, everyone I interacted with during my visit was more than willing to help answer my questions, and did so with a smile. Just an enjoyable overall experience at one of Orange County's premiere attractions -

Knott's Berry Farm in Buena Park California does indeed have something for just about everyone. From children to senior citizens, and everywhere in between. While the overall concept still might have a little more room for future growth, re-design, and modest enhancement in certain areas, why experiment with near perfection?

- By all measures, "Knott's Berry Farm" just exudes the aura of both quality entertainment, and all things consistent with an important historical experience. This unlikely combination of historical significance and exhilarating family fun, has slowly evolved since the 1920s into what it is today, a perfect match." - A.P. - 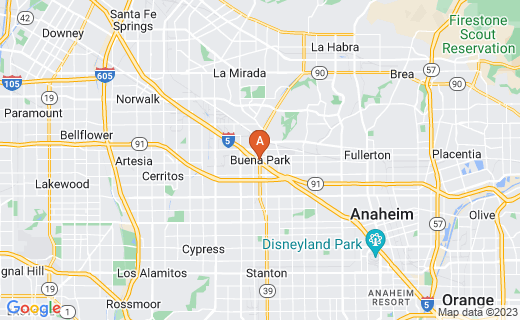